Cochise was an English rustic-rock band that released three albums on United Artists/Liberty between 1970 and 1972.

Cole (b. 1946, Enfield, Middlesex) had played in UK country bands since the mid-1960s. During the psychedelic era, he played pedal steel guitar in The Nite Life, which released the album Country Meets Folk on small-press Beacon in 1969. By then, he was eager to cross over into post-psych rock.

Brown (b. 1942, Pinner, Middlesex) first gigged circa 1960 in The Corvettes, a rock n’ roll band that featured a young Reginald Dwight. The two formed Bluesology, which gigged the beat circuit for six years and released three 1965–67 singles. Nineteen performers passed through the lineup, including future members of Hookfoot, Heads Hands & Feet, Soft Machine, and singers Marsha Hunt and Long John Baldrey. Bluesology disbanded in 1968 when Dwight formed a songwriting partnership with lyricist Bernie Taupin and adopted the stagename Elton John.

In 1969, Cole and Brown were introduced by rock manager Peter Grant, who was looking to assemble a “British Flying Burrito Brothers.” Before he could invest more time into the project, Grant got swept by the rapid rise of his man client, Led Zeppelin. Meanwhile, the pair met Grabham, an available talent with like-minded ideas.

Grabham (b. 1948, Sunderland) was fresh off a two-year stint in Plastic Penny, a pop-psych band that released two albums on Page One, a beat label co-founded by Dick James of DJM Records. This allowed Grabham free access to DJM’s demo studio on New Oxford Street, where they traded session hours with Elton John and The Troggs.

Cochise did the college and festival rounds and signed a management deal with Clearwater Productions, which also represented Hawkwind and High Tide. Clearwater landed all three bands on United Artists, which featured a growing roster of like-minded talent (Brinsley Schwarz, Man). 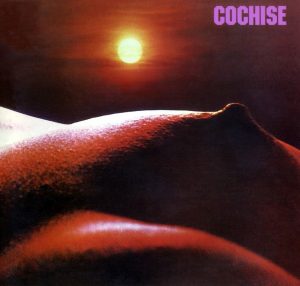 Cochise released the self-titled debut album in July 1970 on UA (UK, France). It features four songs per side: two apiece by Cole (“Trafalgar Day,” “Moment and the End”) and Stewart (“Watch This Space,” “Past Loves”), plus a rough cover of the Simon & Garfunkel deep cut “59th Street Bridge Song (Feeling Groovy),” a 1967 US sunshine hit for Harper’s Bazaar. Grabham wrote the opening two numbers (“Velvet Mountain,” “China”) and the seven-minute epic “Painted Lady.”

Cochise sports a gatefold designed by Hipgnosis. It presents a visual double-take: sunset hills and valleys formed by the close-up contours of a naked female torso (a trick later used in the album art of Flash and Wilding-Bonus). The inner-spread features a collage of group and members pics, close-up and medium-shot, including four photo-negatives.

In November 1970, Cochise cut a non-album cover of Buddy Holly’s “Love’s Made a Fool of You,” backed with the Grabham original “Words of a Dying Man.” This and all subsequent titles were released in the UK on UA’s Liberty division.

Cole’s steel playing, a rarity on the UK scene, netted him numerous session offers. During 1970, he guested on albums by Brinsley Schwarz, Fair Weather, G.F. Fitz-Gerald, and Humble Pie. 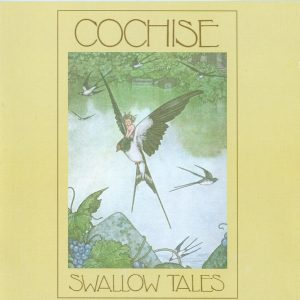 Cochise released their second album, Swallow Tales, in 1971 on Liberty (UK, Germany, Netherlands, Japan) and UA (US). Grabham contributed six numbers, including “Another Day,” a twangy harmony ballad with a searing, intense coda; and “Down Country Girls,” a finger-picking ditty that crashes into the Leslied “Home Again.” Cole wrote three tracks, including the breezy, vaguely Latin “Lost Hearts” and the elongated, multi-guitar exercise “Axiom of Maria.”

The Swallow Tales cover, designed by one Paul Hickson, appropriates an illustration by early 1900s English cartoonist Heath Robinson. It shows a cherub on the back of a flying swallow. German copies sport a black, white, and red sleeve with the band positioned around a tree under a Japanese sun. 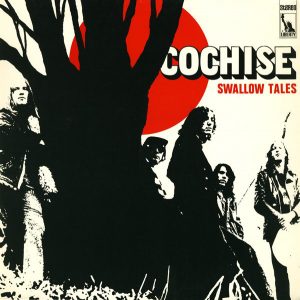 Elton John sidemen Nigel Olsson and Caleb Quaye appear on the mellow short “Strange Images.” Quaye plays piano on two additional cuts (“Home Again,” “Can I Break Your Heart”) and does guitar trade-offs on “Another Day” with fellow-guest Tim Renwick, a sessionist with prior credits on albums by David Bowie and Magna Carta (Seasons). Humble Pie frontman (and ex-Small Faces) Steve Marriott handles piano and backing vocals on “Why I Sing the Blues.” In addition to pedal steel, Cole plays “resonator guitar” on select passages.

Liberty issued “Why I Sing the Blues” as a single, backed with the album’s opening cut “Jed Collder.”

After sessions wrapped, Willie teamed with Renwick in a new band, the rustic-rock quartet Quiver, which released two 1971/72 albums on Warner, then teamed with the Sutherland Brothers. Meanwhile, Cole did session work on 1971 albums by Ashton, Gardner & Dyke, Nazareth, and Phillip Goodhand-Tait. Notably, he plays the crying steel on “Tiny Dancer,” one of Elton John’s most recognized evergreens.

Grabham immediately followed Cochise with his 1972 solo album Mick the Lad. He then replaced Robin Trower in Procol Harum, commencing a four-year tenure with the 1973/74 albums Grand Hotel and Exotic Birds and Fruit. In 1977, he played on the album Down to Earth by the Sutherland Brothers & Quiver. He also partook in the vaulted third album by revolving-door rockers Bandit.

During the 1980s, Cole appeared on recordings by Microdisney, Paul Young, David Sylvian, The Stranglers, and Everything But the Girl.

George Freeman
George Freeman (born April 10, 1927) is an American jazz-funk guitarist from Chicago. Discograp...
Hookfoot
Hookfoot were an English rustic/hard-rock band that released four albums on A&M/DJM between 19...
The Whispers
The Whispers were an American soul group from Watts, Calif., formed in 1964. A four-year run of si...
Shabby Tiger
Shabby Tiger were an English hard-rock/pop band from Blackburn that released five 1974–76 singles ...
Bobby Hutton
Bobby Hutton (born Harold Hutton) is an American soul singer from Detroit who released six singles b...