Ashton, Gardner & Dyke were an English organ-rock trio that released a self-titled album on Polydor in 1969, followed by two albums and a soundtrack on Capitol between 1970 and 1972. Bassist Tony Ashton and drummer Roy Dyke hailed from the R&B/beat combo Remo Four, which gigged for five years and released the album Smile! in 1967. Bassist Kim Gardner had recently played in a latter-day version of The Creation with Ron Wood; the two had earlier played together in The Birds (UK).

Ashton, Gardner & Dyke had their their roots in two 1960s beat groups: The Remo Four and The Birds.

The Remo Four, formed in 1959 in Liverpool, were active on the Merseyside scene during the early ’60s as contemporaries of The Beatles and The Searchers. In 1963, they welcomed Roy Dyke on drums. As clients of rock manager Brian Epstein, they released three singles on Pye and six on Piccadilly in 1963/64. In late 1965, they hired keyboardist Tony Ashton, who also assumed the mic from their troubled frontman, Tommy Quickly.

With Ashton, The Remo Four issued the 1966 R&B/rock album Smile! on Fontana. In 1967, they backed George Harrison on his solo soundtrack project Wonderwall. During the late ’60s, they backed singer Billy Fury on a string of Parlophone singles.

Gardner first appeared in beatsters The Thunderbirds, which he formed in 1964 with three art school classmates, including teenage guitarist Ron Wood. They signed to Decca as The Birds and issued three singles in 1964/65. By the time of their 1965 release “No Good Without You Baby,” Californian act The Byrds hit the UK on a wave of stateside chart success. After a failed lawsuit and a round of negative publicity, they issued one further single as The Birds Birds.

In early 1967, Gardner joined The Creation, a mod band popular in Germany and Denmark. They issued two singles and the European album We Are Paintermen. When that band split, Gardner reteamed with Wood (who now played bass in the Jeff Beck Group) in the Santa Barbara Machine Head, a blues-rock quartet that also featured organist Jon Lord, formerly of The Artwoods (led by Ron’s older brother, Art Wood), and Tomorrow drummer John “Twink” Alder. They recorded three songs that appear on the 1968 Immediate comp Blues Anytime Vol.3 – An Anthology of British Blues.

In mid-1968, Gardner and Wood joined a reformed Creation and cut a handful of songs, including the German single “For All That I Am.” This lineup fizzled almost immediately, freeing Wood for his Beck commitments (and eventual move into Faces with JBG frontman Rod Stewart).

The newly free Gardner formed a rock trio with Ashton and Dyke of the now-defunct Remo Four. Though intent on maximizing the keyboard/bass/drums format, they employed musicians to augment their sound, including guitarist Mick Liber, formerly of Australian blues-rockers Python Lee Jackson (which cut a pre-fame song with Stewart). 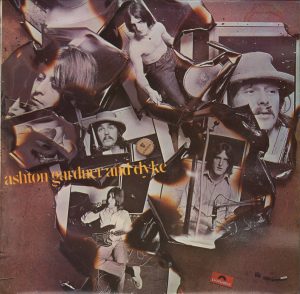 Ashton, Gardner & Dyke debuted in January 1969 with the single “Maiden Voyage,” a soul-rock ballad with a plaintive verse and swelling chorus marked with rippling organ and songwriter Ashton’s guttural vocals. It was produced by Australian Vince Melouney (The Aztecs, Bee Gees), who wrote and self-recorded the flipside, “See the Sun In My Eyes,” a raga-psych number laced with sitar, vibes, and flute.

“Maiden Voyage” is the centerpiece on the trio’s self-titled debut album, released in late 1969 on Polydor. The album features eight additional Ashton originals, including the opening trifecta on side one:

Side two contains “Picture Sliding Down the Wall,” a melodramatic R&B number with snaky guitar and piano runs over a bobbing bassline. The closing “As It Was In the First Place” is a mournful, minor key opus with pained vocals, swirling organ, and thundering orchestration; cut by interludes of waltz piano and sweet strings. Ashton also submitted two versions of his 12-bar piano boogie “Billy and His Piano,” with and without vocals, plus the classical piano etude “Vaggsang.” 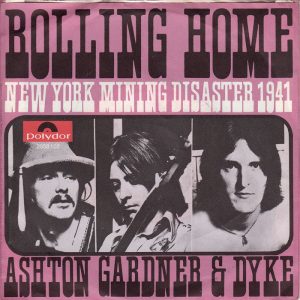 “Rolling Home” and “NY Mining Disaster” each appear on assorted versions of the 1970 UK/Germany Polydor comps Supergroups Vol 2 and Supergroups ’70 along with cuts by labelmates The Who, Fat Mattress, Gass, The Savage Rose, Tony Williams Lifetime, Ten Wheel Drive, Taste, Joe Cocker, Stone the Crows, Golden Earring, and Thunderclap Newman. In Germany, Polydor paired the two songs on a 1971 single.

In April 1970, Ashton, Gardner & Dyke played at the Rose d’Or Festival 1970, a four-day concert event at the Casino de Montreux in Switzerland with performances by Black Sabbath, Renaissance, If, The Greatest Show On Earth, Ekseption, The Flock, and Quintessence.

Also in 1970, the trio played instrumental backing on the self-titled debut solo album by Irish singer/songwriter Jonathan Kelly, released that November on Parlophone with additional backing by vocalists Lesley Duncan and Madeline Bell.

In late 1970, Ashton, Gardner & Dyke issued “Resurrection Shuffle,” a galloping neo-’50s R&B/rock ‘n’ roll track with belted vocals and brass. It reached #3 on the UK singles chart and #40 on the Billboard Hot 100. Ashton wrote that and the b-side, “I’m Your Spiritual Breadman,” an uptempo, major key soul-rock tune with dense, channel-separated arrangements. 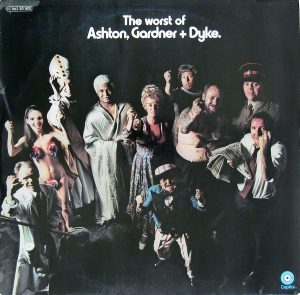 The b-side appears on The Worst of Ashton, Garner + Dyke, released on Capitol Records in 1971. Each side starts with a group-written track (“Let It Roll,” “Momma’s Getting Married”) and proceeds with four Ashton originals, including “Mention My Name,” “Hymn to Everyone,” and “Paper Head, Paper Mind,” a sparse piano/drum dirge concerning news of hippies and skinheads and the impressions each had an older folks at the time.

The album was recorded at De Lane Lea Sound Centre on Dean Street and produced by the trio with engineer John James Stewart (Cochise, Hardin & York, Clark-Hutchinson). In North America, the album appeared as Resurrection Shuffle with the namesake hit in lieu of “Mention My Name.”

Photographer Tony May (Paladin, Kansas, Pink Floyd, Helloween) took the cover shot: a group of diverse people (a pope, a stripper, a businessman, a drunkard, a general, a Victorian, a carnival MC) staring upward with clenched fists.

In 1971, Ashton, Gardner & Dyke did the soundtrack to the American Western film The Last Rebel starring NFL legend Joe Namath. Ashton and Lord co-wrote the score, which features backing by the Royal Liverpool Symphony Orchestra on select numbers. 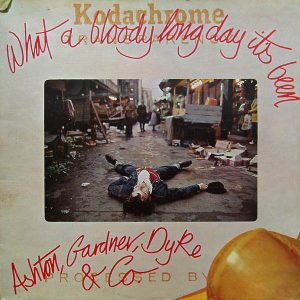 As Ashton, Gardner, Dyke, & Co., they released their fourth and final album, What a Bloody Long Day It’s Been, in 1972 on Capitol. It features a 10-minute remake of “The Falling Song” with a brassier arrangement and extended instrumental middle, where trumpet, strings, and piano trade off amid swinging ride cymbals. The second track, “It’s a Drag, I’m a Drag,” is a frenetic rocker with jet-engine riffs and honking horn interjections over a melodramatic minor-key pattern. The closing ballad, “I’m Going to a Place,” crests on a silvery slide lick over quiet Leslied chords and vibes in tranquil Cmajor7.

What a Bloody Long Day It’s Been features two group written cuts and four further Ashton numbers, including the twangy, uptempo “Ballad of the Remo Four,” which recalls his and Dyke’s adventures in that band. Ashton produced the album at De Lane with engineer Dave Stock. Prior musical guests (Liber, Caswell, Jenkins) appear on select passages.

Photographer Shepard Sherbell (Osibisa, Gringo, Budgie, Pentangle) took the cover image, based on a concept by Barrie Wentzell (Yes, Trapeze, Jody Grind, Wishbone Ash). It shows a knocked out Teddy Boy on a litter-strewn promenade, as seen on a thumb-held Kodak slide. The back cover contains a story by journalist Roy Hollingworth (Melody Maker) that tells a tale of two ruffians, Dobber Ruffly and Sharper Person.

Capitol lifted “Still Got a Long Way to Go” as the trio’s final single, backed with the non-album “Delirium.”

Musically, the band gave an organ-dominated twist to the power-trio format, replete with brassy charts amid the belting command of vocalist Tony Ashton. On the trio’s first album, Ashton’s frontal organ walls and gruff vocals take center stage. The formula powers everything from the Hammond-chordal punch-outs that break each chorus on “Why Did You Go” to the sea-parting keys of “Maiden Voyage,” where the belter soars like a tidal wave whilst bellowing the words “it’s no illusion.” Another standout is the opening “Rolling Home,” where brassy clips and pummeling rhythms place the trio on sonic par with ex-trio player Jack Bruce, who mined similar territory on his concurrent Songs of a Tailor LP.