Led Zeppelin was an English rock band, formed in 1968 and active till 1980. Guitarist Jimmy Page formed the band from the ashes of the Yardbirds. They emerged as standard bearers for a new generation of hard-rock performers, fronting a movement that soon included Black Sabbath, Deep Purple, Uriah Heep, Nazareth, and Budgie. Across the span of eight studio albums, Zeppelin drew acoustic layers and symphonic strings into an electrified framework, influencing folk and progressive rock.

Zeppelin shot to fame on a transatlantic scale with their first two albums, Led Zeppelin and Led Zeppelin II, both released in 1969. Evergreens from those and their 1970 release Led Zeppelin III  include “Communication Breakdown,” “Dazed and Confused,” “Whole Lotta Love,” and the “Immigrant Song.” Their popularity peaked between 1971 and 1975 with the albums Led Zeppelin IV [Zoso], Houses of the Holy, and Physical Graffiti: sources of the FM rock staples “Stairway to Heaven,” “Black Dog,” “Misty Mountain Hop,” “Over the Hills and Far Away,” “Trampled Under Foot,” and “Kashmir.”

Beset with personal matters, Led Zeppelin’s output slowed during the late ’70s, but they rebounded with the 1979 release In Through the Out Door and the hits “Fool In the Rain,” “In the Evening,” and “All My Love.” They disbanded after the 1980 death of drummer John Bonham. Singer Robert Plant launched a successful solo career during the ’80s and later re-teamed with Page for new and revisited unplugged material.

Led Zeppelin sprung from a late-period lineup overhaul of the Yardbirds. The guitarist in that band, Jimmy Page, was in charge of finding new members when singer Keith Relf and drummer Jim McCarty left in mid-1968 to form Renaissance.

Page (b. 1944) had played in skiffle groups as a teen and became an active sessionist during the 1963–65 beat boom, playing on recordings by The Kinks, The Who, Petula Clark, Marianne Faithfull, and The Nashville Teens. In 1966, he replaced bassist Paul Samwell-Smith in the Yardbirds, where he briefly played that instrument before swapping roles with rhythm guitarist Chris Dreja. After the acrimonious departure of lead guitarist Jeff Beck, Page directed the band through their 1967 release Little Games and its accompanying singles.

As the band fell apart, Page phoned singer Terry Reid, who declined the offer due to a just-signed solo contract. Reid, in turn, recommended vocalist Robert Plant (b. 1948) of Brummie blues-rockers Band of Joy. Plant brought along his bandmate, drummer John Bonham (b. 1948). When Dreja dropped from the project, Plant phoned session bassist John Paul Jones (aka John Baldwin, b. 1946). The two interacted previously in a jam session with Beck and Who drummer Keith Moon that yielded the 1966 instrumental “Beck’s Bolero.”

The new four-piece initially gigged as The New Yardbirds, in part to honor some pre-booked billings in Scandinavia. Knowing they needed a heavier, less beat-intoned nameplate, they chose Led Zeppelin, inspired by a remark Moon made about the band going down like a lead balloon. To avoid mispronunciation, “lead” was deliberately misspelled “led” at the insistence of manager Peter Grant, a burly ex-bouncer hired to oversee the Yarbirds in their final days. He secured Zeppelin a five-year, $143,000-advance contract with Atlantic Records.

Led Zeppelin did their first tour of the states between December 1968 and February 1969. On select dates, they opened for LA psych-rockers Spirit, whose song “Taurus” (written by guitarist Randy California) would inspire Zeppelin’s signature song “Stairway to Heaven.” 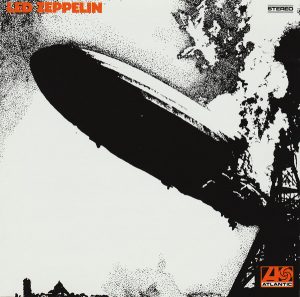 Led Zeppelin released their self-titled debut album in March 1969 on Atlantic. It features two Page originals (“Dazed and Confused,” “Black Mountain Side”), a Page/Jones co-write (“Your Time Is Gonna Come”), and three Page/Jones/Bonham compositions (“Good Times Bad Times,” “Communication Breakdown,” “How Many More Times“). Each side contains a cover of bluesman Willie Dixon (“You Shook Me,” “I Can’t Quit You Baby”). The centerpiece of side one, “Babe I’m Gonna Leave You,” is a Page-arranged traditional.

Led Zeppelin commenced sessions for a followup in April 1969 at Olympic and Morgan Studios in London. However, they broke for a US tour during July and August. They played at nine different festival events that summer, including the Atlanta International Pop Festival (July 5) with Joe Cocker, Janis Joplin, the Staple Singers, Blood, Sweat & Tears, Chicago Transit Authority, and Ten Wheel Drive. Later that month, Zeppelin played the Midwest Rock Festival along with Blind Faith, Taste, SRC, and Zephyr. Their final date was the second night (Aug. 31) of the Texas International Pop Festival, which also featured performances by Santana, the Incredible String Band, Ten Years After, the Nazz, Herbie Mann, Rotary Connection, and Sly and the Family Stone. 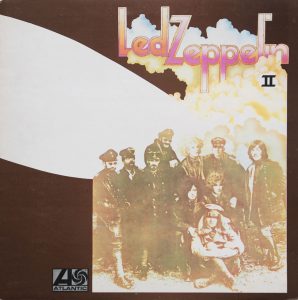 Led Zeppelin II hit shelves in late October 1969 on Atlantic. It marks the start of the Page/Plant songwriting partnership with five co-writes: “What Is and What Should Never Be,” “Thank You,” “Livin’ Lovin’ Maid (She’s Just a Woman),” “Ramble On,” and “Bring It on Home.” Also included are three group-written numbers (“Whole Lotta Love,” “The Lemon Song,” “Heartbreaker”) and the Bonham-dominated instrumental “Moby Dick.”

“The Lemon Song” evolved from their cover of “Killing Floor,” a 1964 song by Chicago bluesman Howlin’ Wolf that also inspired the band Killing Floor. “Whole Lotta Love” derives from the Willie Dixon number “You Need Love” and “Bring It on Home” borrows from his song of the same name. Later lawsuits forced Zeppelin to attributed co-writing credits to each party on the respective numbers.

Led Zeppelin II is housed in a gatefold sleeve designed by David Juniper, who subsequently did album art for Rupert Hine and Grant’s other main client, Scottish soul-rockers Stone the Crows. It shows the band (and French actress Delphine Seyrig) doctored into a photo of a WWI-era German aviation unit. A silhouette of the crashing Zeppelin blimp consumes the backdrop. The inner-spread shows a spotlighted golden Zeppelin hovered above a Roman temple.

During February and March 1970, Led Zeppelin toured the continent. They courted controversy in Copenhagen with Frau Eva von Zeppelin, descendant of Count Ferdinand von Zeppelin, creator of the Zeppelin aircraft. She objected to the band’s use of her family’s name and the appropriation of Hindenburg imagery on their album covers. As a comprise, they billed their Danish dates as The Nobs (a play on European promoter Claude Nobs).

Two North American tours followed in the spring and late summer, at which point Zeppelin ousted the Rolling Stones and the recently-disbanded Beatles as the highest grossing rock act. On a two-night stint at New York’s Madison Square Garden, the band grossed $100k, thanks in part to Grant’s shrewd management. Amid these activities, Zeppelin recorded their third album, mostly at the Rolling Stones Mobile Studio and Headley Grange (a country house in Hampshire) with additional work at Island and Olympic studios. 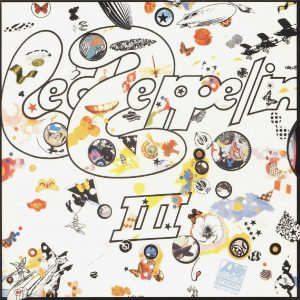 Led Zeppelin III appeared in October 1970 on Atlantic in all territories. Page and Plant partnered on the opening two numbers, “Immigrant Song” and “Friends,” while Jones joined the pair on the following “Celebration Day” and “Since I’ve Been Loving You.” The side wraps with “Out On the Tiles,” co-composed by the three instrumentalists.

Side two begins with “Gallow’s Pole,” a traditional arranged by Page and Plant, who also co-wrote the centerpiece “That’s the Way.” The album wraps with another adaptation, “Hats Off To (Roy) Harper,” based on the 1937 blues song “Shake ‘Em On Down” by Bukka White and done as a tribute to contemporary folkster Roy Harper.

Jones pitched in on “Bron-Y-Aur Stomp,” about the 18th century Welsh cottage where they wrote and rehearsed several songs for the album. The ambience at Bron set the folksier tone of Led Zeppelin III, as exemplified in Page’s acoustic arrangement of “Tangerine,” originally written in 1968 while still a Yardbird.

Sessions for Led Zeppelin III began in November 1969, one month after II‘s release, and continued through the following August. They completed sixteen songs in all, including “Hey, Hey, What Can I Do,” issued as the b-side of “Immigrant Song.” Other leftover tracks later appeared on Coda (“Poor Tom”) and deluxe editions of III (“Jennings Farm Blues,” “Key to the Highway/Trouble in Mind”). Another song about the cottage, simply titled “Bron-Yr-Aur,” would appear on their 1975 double album Physical Graffiti. Original (and most subsequent) vinyl pressings of Led Zeppelin III are housed in a gatefold with a working-wheel front sleeve, designed by multi-media artist Zacron. The outer-spread shows flying objects and balloon letters over a white background. Across the front, die cut holes reveal the loaded collage on the spinning wheel. The inner-spread shows further objects (trinkets, Zeppelin-shaped corns, vintage triplanes) floating through spherical shapes.

“Immigrant Song” went Top 10 in multiple markets (US Cashbox #8). The b-side, “Hey, Hey, What Can I Do,” also became a US FM staple and their most recognized non-album song.

Led Zeppelin commenced sessions for their fourth album in December 1970 at the Rolling Stones Mobile Studio with Johns and Stones touring keyboardist Ian Stewart. Though slated for an April 1971 release, Page remixed the tracks that summer between touring commitments. To avoid comparisons with prior works, they made the album title-less. The album, informally known as Led Zeppelin IV, appeared in November 1971.

Circus
Circus were a South African hard-rock/pop band from Port Elizabeth that released the album In the ...
Martin Wall
Martin Wall is a Canadian keyboardist and songwriter from Toronto who released the album Metaphys...
Toubabou
Toubabou were a Québécois jazz-funk/soul ensemble that released a live album on Kot'Ai in 1974, fo...
Houston Person
Houston Person (born Nov. 10, 1934) is an American post-bop/jazz-funk tenor saxophonist and recor...
Ensemble Pittoresque
Ensemble Pittoresque were a Dutch coldwave band that released two albums on Clogsontronics and Vip...