Beggars Opera was a Scottish symphonic/psych band that released four albums on Vertigo between 1970 and 1973 — including the popular 1971/72 efforts Waters of Change and Pathfinder — followed by two mid-decade titles on Jupiter. A return to Vertigo yielded the 1980 album Life Line. A further round of ’80s-era recordings would appear on the archival Scratch Records release The Final Curtain.

In 1969, guitarist/singer Rick Gardiner (b. 1948, Edinburgh) formed Beggars Opera with singer Martin Griffiths (b. 1949, Newcastle) and bassist/flutist Marshall Erskine. Gardiner hailed from a series of local beat groups (The Vostoks, The Kingbees) and first linked with Griffiths and Erskine in another unrecorded group, The System. All three held summer jobs at the M40 Motorway near Beaconsfield, England, when they formed the new band, named after the 1728 ballad opera by dramatist John Gay.

They convened in Glasgow, where they hired organist Alan Park and drummer Raymond Wilson. With a residency at the Burns Howff club on West Regent Street, Beggars Opera signed to Philips/Phonogram-subsidiary Vertigo. 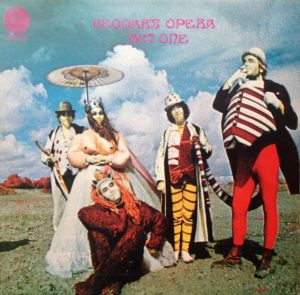 Act One was recorded at De Lane Lea Studios, Holborn, and produced by the team of Bill Martin and Phil Coulter, mostly known for their work in the MOR realm. The album was engineered by Martin Birch, who also worked on 1970 albums by Deep Purple (In Rock), Faces (First Step), Fleetwood Mac, Gary Farr, Jodo, Junco Partners, Rock Workshop, Skin Alley, Steamhammer, Stray, and Wishbone Ash.

The original UK Vertigo release of Act One (cat# 6360018) appeared between titles by Colosseum (Daughter of Time) and Gentle Giant (self-titled). Most pressings are housed in a gatefold sleeve with photos of the band in masks and costumes that suggest a hippie-fied interpretation of Gay’s opera. The inner-spread shows vertical mirror images of the members leaned over a ledge. All visuals are credited to designer and photographer Keith McMillan (aka Keef), who did album visuals for numerous post-psych acts on Vertigo (Affinity, Black Sabbath, Fairfield Parlour, Manfred Mann Chapter Three) and RCA (Fresh Maggots, Raw Material, Stonehouse, Tonton Macoute).

In the US and Canada, Act One appeared on Verve Records, a jazz label just then dipping into other styles (Frank Zappa, Laura Nyro, The Velvet Underground).

Before they completed a second album, Erskine stepped aside for bassist Gordon Sellar. Virgina Scott joined on Mellotron and vocals. One song, “Festival,” was finished before the change. 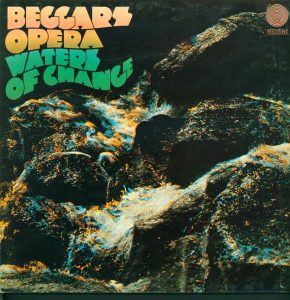 The second Beggars Opera album, Waters of Change, appeared in November 1971 on Vertigo (UK, Oceania, Germany, Italy, Canada, ZA). The album contains a short instrumental dirge (“Nimbus”), two short interludes (“Lament,” “Impromptu”), and five epics in the 6–8-minute range: two on side one, co-written by Park (“Time Machine,” “I’ve No Idea”); two on side, two co-written by Scott (“Silver Peacock,” “The Fox”). Griffiths is the constant writing collaborator on both sides, co-authoring “Festival” with Park and Erskine, who plays bass and flute on the song.

Waters of Change was produced at De Lane by Martin–Coulter and engineered by Birch and Barry Ainsworth, whose collective 1971 credits include titles by Continuum, Groundhogs (Split), Jack Bruce (Harmony Row), Raw Material (Time Is…), Ray Russell, Stackridge (self titled), Stud, and Toad.

The album gatefold shows a saturated closeup of water splashed along a jetty. The inner-fold shows a high-contrast, b&w outdoor shot of the sextet. Visually, Scott is distinguished by her Nana Mouskouri-like hair and glasses. The original UK release of Waters of Change appeared in the 6360 volume of Vertigo’s swirl series (#054), between titles by Mike Absalom (#053) and ex-Manfred Mann singer Paul Jones (#059). 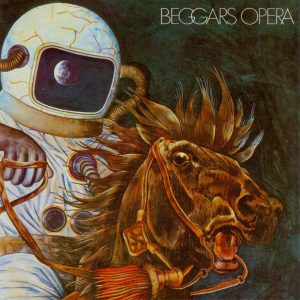 Beggars Opera released their third album, Pathfinder, in August 1972 on Vertigo (UK, Europe, Canada, Brazil, Australia, ZA). It features two Gardiner originals (“Stretcher,” the title track) and two co-writes with Virginia Scott (“The Witch,” “From Shark to Haggis”). The album starts with a cut by Park (“Hobo”) and ends with “Madame Doubtfire,” co-written by Gardiner, Griffiths, and outsider Alexander McFreddries.

The centerpiece of side one is an eight-minute cover of “MacArthur Park,” the Jimmy Webb opus made famous by English actor/singer Richard Harris. Griffiths presents the song with deep-voiced, melodramatic melisma amid Park’s pounding, glistening harpsichord.

Original copies of Pathfinder are housed in a six-fold poster sleeve designed by the Bloomsbury Group (Salisbury, Suite London). The foldout depicts an astronaut on horseback, painted by Peter Goodfellow, who later did the illustrations for Jeff Wayne’s Musical Version of The War of the Worlds.

Griffiths wrote the liner notes, which summarize the album track-by-track. About “The Witch,” he warns “A blood curdling scream sets the scene for the last track, first side—a tale from the dark past of witch burning—a track not to be heard last thing at night!!!” His intended title for the album: Pathfinder—the Seeker. This would be his final album with the band.

Beggars Opera are a five piece on Pathfinder. Scott, by virtue of her writing contributions, remained in the group but stepped down from the lineup. She isn’t mentioned apart from the writing credits.

Pathfinder is #073 in Vertigo’s 6350 volume, between titles by Freedom and Catapilla.

In the UK and Portugal, Vertigo issued a 7″ of “Hobo” (b/w “Pathfinder”). “MacArthur Park” appears on Superheavy Three, a 1973 Peruvian Vertigo comp with cuts by Aphrodite’s Child, the Sensational Alex Harvey Band, Status Quo, and repeat acts from earlier in the series.

The Blue Nile
The Blue Nile were a Scottish art-pop/sophisti-pop trio that released four albums at lengthy inter...
Power of Zeus
The Power of Zeus were an American hard-rock/psych band from Detroit that released the album The ...
Don Shinn
Don Shinn (born December 15, 1945) is an English keyboardist and composer who played in the '60s bea...
Listening
Listening were an American psych-rock band from Boston that released a self-titled album on Vangu...
Blue Sun
Blue Sun were a Danish band from Copenhagen that debuted with the live album Peace Be Unto You on...