High Tide formed in 1969 when guitarist Tony Hill and bassist Peter Pavli met multi-instrumentalist Simon House at the pad of aspiring rock manager Wayne Bardell, who gave them lodging. Though he had a bass on hand, House announced he could also play violin, which sparked Hill’s interest. They formed High Tide with drummer Roger Hadden. Bardell served as their manager.

Hill first appeared in beat trio The Answers, which cut two 1966 Columbia singles, including the searing, pounding Hill original “Just a Fear.” He then did a brief stint in The Misunderstood, an American garage-rock band from Riverside, Calif., that moved to London at the behest of their manager, future BBC Radio 1 DJ John Peel. They quickly crumbled due to visa issues and the military draft of one member, but did record six songs, including the proto-psych single “I Can Take You to the Sun” (b/w “Who Do You Love”), released in December 1966 on Fontana with both sides co-written by Hill. Two further tracks from those ’66 sessions, “Children of the Sun” (b/w “I Unseen”), were paired on a 1969 Fontana single. (The other guitarist in The Misunderstood, slide player Glenn Ross Campbell, co-founded blues-rockers Juicy Lucy.)

Pavli (as Peter Pauli) played in The Worrying Kynde, a mod quintet that issued the single “Call Out My Name” (b/w “Got the Blame”) in 1967 on Piccadilly. 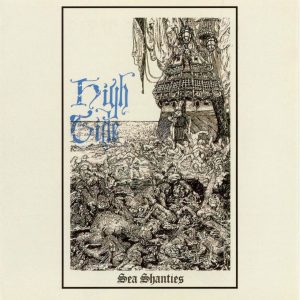 High Tide signed to United Artists subsidiary Liberty and released their debut album, Sea Shanties, in late 1969. It features five Hill originals, including two in the nine-minute range (“Death Warmed Up,” “Missing Out”) and three at approximately five minutes (“Futilist’s Lament,” “Pushed, But Not Forgotten,” “Walking Down Their Outlook”). The sixth track, “Nowhere,” is a House/Hadden co-write.

The innerfold shows a figure-headed wooden ship sailing into space on a flowery, intergalactic waterway. That and the gothic cover illustration were done by artist Paul Whitehead, who did recent covers for The Idle Race, T.I.M.E., and Renaissance and subsequent artwork for Genesis, Peter Hammill, Steamhammer, and Van der Graaf Generator. It was this cover that impressed Peter Gabriel and prompted Genesis to commission Whitehead for their 1970–72 albums Trespass, Nursery Cryme, and Foxtrot. 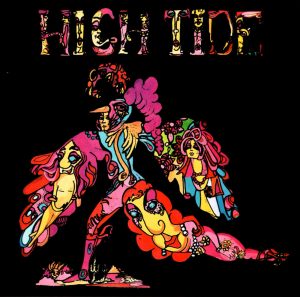 In 1970, High Tide released their self-titled second album on Liberty. Side 1 contains two numbers, “Blankman Cries Again” (8:25) and “The Joke” (9:25). The 14-minute “Saneonymous” consumes all of side 2. All pieces are group-credited.

High Tide was co-produced between the band and engineer George Chkiantz (Family, Fat Mattress, Soft Machine, Horse, Man, Quintessence, Day of Phoenix, Ten Years After). According to a 1993 reissue on Japanese EMI, the artwork was done by one Joanna Enderby-Smith. It depicts a Victorian burlesque performer decked in garish lady-doll extremities under a nameplate made of squeezed, contorted figurines.

High Tide would be the last proper release by the original quartet. In October 1970, the lineup of Hill, House, Hadden, and Pavli did a live in-studio session that comprised the archival CD Precious Cargo, released in 1989 by Italian specialists Cobra Records. It features seven tracks, including “The Great Universal Protection Racket,” originally intended for High Tide but cut due to time constraints. The version here, mistitled “Exploration,” clocks in at 9:08.

In late 1970, Pavli drifted to Rustic Hinge, an avant-rock combo led by Arthur Brown between his time in The Crazy World and Kingdom Come. An album-length document of their existence, Replicas, appeared years later (1988) on Reckless Records. In 1975, Pavli played on the space-rock album The New Worlds Fair by Michael Moorcock & The Deep Fix.

House joined freak-folksters the Third Ear Band for their 1972 Harvest release Music From Macbeth, a soundtrack to the 1971 historical drama by director Roman Polanski. In 1974, he joined Hawkwind in time for their fourth album, Hall of the Mountain Grill, and stayed for the 1975–79 albums Warrior on the Edge of Time; Astounding Sounds, Amazing Music; Quark, Strangeness and Charm; 25 Years On (released as Hawklords); and P.X.R.5. He also played on the Moorcock title and Robert Calvert‘s second solo album, Lucky Leif and the Longships. In 1978, House joined David Bowie‘s backing band for the live release Stage and 1979 studio album Lodger. During the early 1980s, he played on recordings by Bruce Woolley, Japan (Tin Drum), and Thomas Dolby (The Golden Age of Wireless). His most recognized violin credit is Dolby’s 1983 transatlantic hit “She Blinded Me With Science.”

In 1986, Hill and House reteamed for the cassette-only release Interesting Times, issued on High Tide Records. During 1990 and 1991, four discs bearing the High Tide moniker appeared on the German label World Wide Records. The first of those, The Flood, reunites Hill and Pavli, who are joined by House and Hadden on four tracks. The remaining tracks feature Pavli’s Rustic Hinge-cohorts Android Funnel (Andy Rickell) and Drachen Theaker. Two of the other discs, A Fierce Nature and Ancient Gates, are Hill/Funnel/Theaker projects. Pavli participated in the fourth disc, The Reason of Success. Also during 1990/91, Hill, Pavli, and Theaker cut two WWR space-rock discs as Hazchem.