Nazareth are a Scottish hard-rock band from Dunfermline, formed in 1968. The band released a pair of albums on Pegasus/Peg in 1971/72, followed by a sting of albums on Mooncrest and Mountain between 1973 and 1980. A further run of titles appeared on NEMS and Vertigo during the 1980s.

Nazareth formed in December 1968 from the remnants of Dunfermline beatsters The Shadettes, which included vocalist Dan McCafferty, guitarist Manny Charlton, bassist Pete Agnew, and drummer Darrell Sweet. Their name originates from the Pennsylvanian city mentioned in “The Weight,” a Robbie Robertson/Band track that had recently been covered by Spooky Tooth. In 1970, Nazareth moved to London and recorded their debut album at Trident Studios. 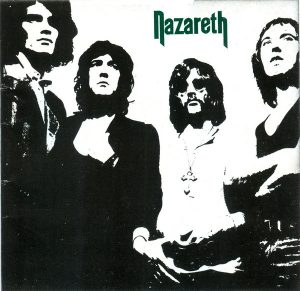 Nazareth released their self-titled debut album on B & C-subsidiary Pegasus in November 1971. It features eight group-composed originals, including “The King is Dead,” “Empty Arms, Empty Heart,” and “Red Light Lady.” The album’s one cover is a seven-minute version of the Tim Rose composition “Morning Dew,” released as a single with the non-album flip “Spinning Top.” Another track, “Dear John,” appeared on 7″ with the non-album “Occasional Failure.” 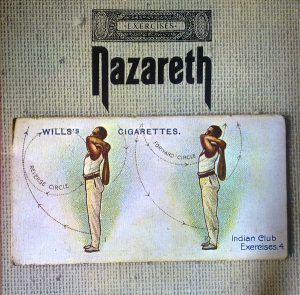 The cover of Exercises was designed by CCS Associates, which also did the visuals for 1972 albums by Free (Heartbreaker), Roxy Music (Roxy Music), and Nick Drake (Pink Moon). Around the time of this album, Nazareth issued the standalone single “If You See My Baby” (b/w “Hard Living”). 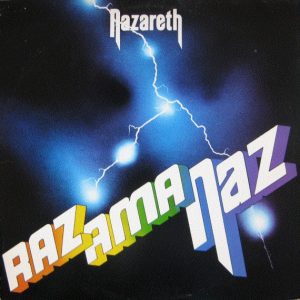 In late 1972, Nazareth linked with Deep Purple bassist Roger Glover, who’d recently ventured into production work on albums by Rupert Hine and American hard-rockers Elf. The first fruit of this union was the May 1973 release Razamanaz, their first of four albums on Charisma-subsidiary Mooncrest. It features seven group originals, including “Too Bad, Too Sad,” “Night Woman,” and the much-covered title-track. 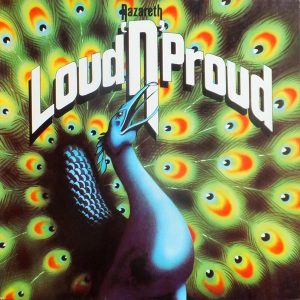 In November 1973, Nazareth issued their second Glover-produced album, Loud ‘n’ Proud. Five of the eight tracks are group originals, including the side-one numbers “Not Faking It,” “Go Down Fighting,” and “Free Wheeler.” The album also includes covers of Little Feat (“Teenage Nervous Breakdown”), Joni Mitchell (“This Flight Tonight“), and a nine-minute rendition of Bob Dylan’s “The Ballad of Hollis Brown,” which features Agnew on fuzz bass. Loud ‘n’ Proud topped the charts in Austria, where it was issued on the Vertigo “spaceship” label.

Nazareth’s fifth album, Rampant, was recorded in Montreux, Switzerland, and released in April 1974. It starts with the buzzing fan-favorite “Silver Dollar Forger (Parts 1 & 2)” and proceeds through seven further group originals, including “Loved and Lost” and “Shanghai’d in Shanghai.” The only cover is The Yardbirds “Shapes of Things,” affixed to the album-closing “Space Safari.” 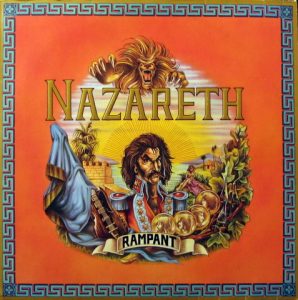 In late 1974, Nazareth issued a non-album cover of the Boudleaux Bryant-penned “Love Hurts” (b/w “Down”), first recorded in 1960 by the Everly Brothers. It was followed in early 1975 by another cover, “My White Bicycle” (b/w “Miss Misery”), originally released in 1967 by Tomorrow. Charlton produced both singles and the subsequent Hair of the Dog, released that April. The original UK version includes five originals, including the latter b-side and “Rose in the Heather,” “Changin’ Times,” and “Please Don’t Judas Me.” 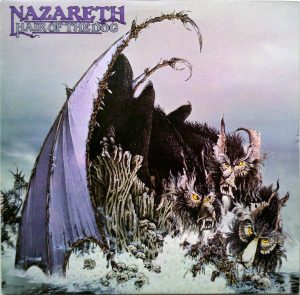 To capitalize on the transatlantic success of “Love Hurts” (US #8, Can. #1), the song was added to North American pressings of Hair of the Dog. The album’s cover art was illustrated by David Fairbrother-Roe, whose distinct fantasy imagery is seen on subsequent albums by Jon Anderson (Olias of Sunhillow) and Popol Ace (Stolen From Time).

Stray
Stray was an English hard-rock band from London that released five albums on Transatlantic Records...
Kilimanjaro
Kilimanjaro were an American jazz-rock band that released two albums between 1979 and 1982. Memb...
Zaine Griff
Zaine Griff — aka Glenn Mikkelson (born Oct. 4, 1957) — is a Kiwi vocalist and musician who was prim...
Crane
Crane were an American hard-rock band that released a self-titled album on Capitol in 1977. The a...
Slade
Slade was an English hard-rock/pop band from Wolverhampton that scored 16 hits on the UK Top 10 betw...