Paris was an American post-psych hard rock trio that released two albums on Capitol in 1976. The band was formed by singer and guitarist Bob Welch after his five-album run with Fleetwood Mac.

Welch, who studied in Paris as a teenager, first performed in The Seven Souls, an interracial soul septet from Los Angeles that competed in a battle of the bands contest. (The victors, Sly and the Family Stone, won a contract with Epic.) The Souls released three singles on assorted labels in 1967/68 before Welch and bandmate Henry Moore formed the soul-psych trio Head West, which issued a self-titled album on the French label Disques Vogue. Once again, Welch resided in Paris for a time.

In 1971, Welch joined the English band Fleetwood Mac, taking the place of guitarist/songwriter Jeremy Spencer. He played on five albums with the band: Future Games, Bare Trees, Penguin, Mystery to Me, and Heroes Are Hard to Find. By 1974, they settled in Los Angeles, where Welch left the band that December.

Cornick moved to LA around the same time after a lengthy career overseas. In 1967, he co-founded Jethro Tull and played on their first three albums: This Was, Stand Up, and Benefit. After his dismissal, he formed Wild Turkey, which issued the 1971/72 albums Battle Hymn and Turkey. In 1974, he played on the album Rock’N’Roll Testament by German rockers Karthago.

Mooney emerged in Philly psych-rockers the Nazz, which issued the 1968/69 albums Nazz and Nazz Nazz and scored a hit with “Open My Eyes.” After the departure of bandleader Todd Rundgren, they issued the leftovers album Nazz III. In 1970, Mooney played in a post-album touring lineup of Fuse, a precursor to Cheap Trick. Several quiet years passed before he linked with Welch and Cornick.

Welch named the band Paris to honor his connections to that city. They secured a deal with the Hollywood-based Capitol Records. 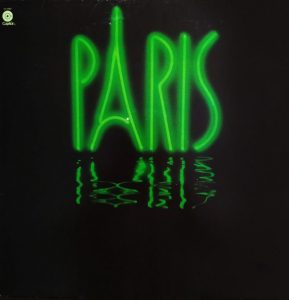 Paris released their self-titled album in January 1976 on Capitol. It features 10 Welch-written originals, including “Narrow Gate (La Porte étroite),” “Nazarene,” “Starcage,” “Red Rain,” and “Beautiful Youth.” The first two tracks, “Black Book” and “Religion,” are incorrectly swapped on the back of original US copies from Capitol’s Winchester, VA, pressing plant.

Cornick designed the album cover: a green neon sign of the word “PARIS” (all caps) reflected in rippling water in pitch black. The “A” is shaped like the outline of the Eiffel Tower. The image reappears as a thumbnail on the rear cover amid a dark-lighted b&w group shot by photographer Herbert Wheeler Worthington III, who also took the cover shots for Heroes Are Hard to Find, Fleetwood Mac, and Rumours. The inner-sleeve features song lyrics printed over a stark vintage overhead shot of Paris, plus a collage of studio pics. Welch is credited as “Robert Welch.”

Between the first and second Paris albums, Mooney departed to another aspiring band, Tattoo, which issued a self-titled album that year on Motown-subsidiary Prodigal. Also in 1976, Mooney appeared on the self-titled Polydor release by Crazy Horse-spinoff The Curtis Bros. Paris replaced him with drummer Hunt Sales, a sessionist who, at 16, played on the 1970 album Runt, the debut solo album by Mooney’s former Nazz bandmate Todd Rundgren. 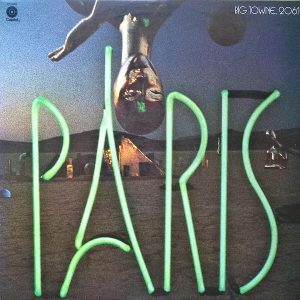 The cover reuses the neon sign, this time before a dim-lit desert hut with floating, disembodied cyborg figurines and foreign planets in low orbit. The back features a posed rooftop photo of the members standing apart at odd angles with a fourth subject (background) holding out an umbrella. Welch and Cornick sport collar-length hair with hats, small tops, and high-waisted flares. Sales, presaging styles of the upcoming decade, sports quiffed hair with a black trench coat and pleated baggies tucked into boots.

Capitol issued “New Orleans” as a proper orange-label single (b/w “Heart of Stone”). “Big Towne, 2061″ appeared on a white-label 7” in mono and stereo.

Welch prepared a new batch of songs for a third Paris album but the group disbanded in early 1977. He used them instead for his debut solo album, French Kiss, released later that year on Capitol. It generated two hits: “Ebony Eyes” and a remake of the 1972 Fleetwood Mac chestnut “Sentimental Lady.” His replacement in FM, Lindsey Buckingham, produced and played on the remake. Welch released three further Capitol albums (1979–80) and another two on RCA (1981–83).

Cornick vanished for two decades, resurfacing for a 1996 tribute to Jethro Tull. In 2006, he reunited Wild Turkey.

Hunt Sales joined Iggy Pop‘s backing band in time for the singer’s second album of 1977, Lust for Life. In 1989, he and brother Tony Sales teamed with David Bowie for two albums in the rock super-group Tin Machine.

After his round of 1976 appearances, Mooney played on 1979 albums by David Werner, Cindy Bullens, Danny O’Keefe, and John Hiatt. In 1982, he surfaced in the new wave group Noel & The Red Wedge. He subsequently played on several albums by Rita Coolidge.

In 2000, both Paris albums were reissued on CD by the hard-rock specialty label Zoom Club Records, which also reissued titles by Marcus, Legs Diamond, Grand Prix, and Nightwing. Paris got reissued again in 2012 on Rock Candy with titles by Starcastle, Wireless, Reckless, Angel, Praying Mantis, and Derringer.