Wild Turkey was an English progressive hard-rock band that released the album Battle Hymn on Chrysalis in 1971, followed by Turkey in 1972. The band was formed by Jethro Tull‘s original bassist Glenn Cornick, who subsequently joined German rockers Karthago and later played in the stateside trio Paris.

Wild Turkey was formed in 1971 by bassist Glenn Cornick after his three-year stint in Jethro Tull.

In late 1967, Cornick followed Anderson and Abrahams to their new band, Jethro Tull. After their first album, Abrahams split to form Blodwyn Pig. Tull hired ex-Penny Peeps guitarist Martin Barre and made the 1969/70 Chrysalis albums Stand Up and Benefit. As the only member with formal training, Cornick was integral in the band’s arrangements. Despite this, Anderson sacked Cornick after Tull’s appearance at the 1970 Isle of Wight Festival, purportedly due to his partying lifestyle.

(Tull replaced Cornick with his predecessor in the Smash, Jefferey Hammond. Later, Tull hired Cornick’s successor in The Executives, bassist Tony Williams, for the US leg of their Heavy Horses tour).

Hopkins and Weathers hailed from Eyes of Blue, a Welsh soul-psych band that issued two albums on Mercury in 1968/69, plus a third as Big Sleep. Weathers served as benefactor to Williams’ prior band Strawberry Dust, a Welsh blues-rock covers band. As Ancient Grease, they released the 1970 album Women and Children First, produced and largely composed by Weathers, who also played on a concurrent single by Pete Brown & Piblokto!

Before Wild Turkey hit the studio, Weathers and Williams departed for Graham Bond’s Magick. Cornick replaced them with drummer Jeff Jones and guitarist Jon Blackmore. Jones’ background stretched to The Bystanders, a Welsh beat group that morphed into Man. He stuck with Man for their first two albums, Revelation and 2 Ozs. of Plastic With a Hole in the Middle (both 1969).

For Wild Turkey, Cornick retained his ties to Tull’s label, Chrysalis. He named his band after a brand of Kentucky straight bourbon whiskey. 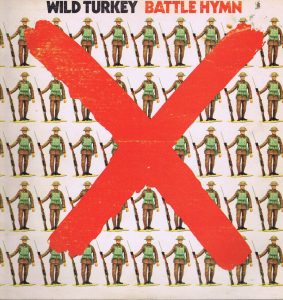 Wild Turkey debuted with Battle Hymn, released on November 19, 1971, on Chrysalis. The album flows as a song cycle comprised of 10 originals, including the Cornick compositions “Butterfly,” “To the Stars,” “Gentle Rain,” and the epic title track. Blackmore wrote three numbers (“Dulwich Fox,” “Sanctuary,” “Twelve Streets of Cobbled Black”) and co-wrote the closing track (“Sentinel“) with Lewis, who co-wrote “One Sole Survivor” with Hopkins, who contributed “Easter Psalm.”

Wild Turkey promoted Battle Hymn with a two-night engagement at the Birmingham Town Hall over Christmas, followed by a winter 1972 transatlantic tour as the opening act for Black Sabbath. Several dates on the March US leg featured triple-bills with up-and-coming acts Bang, White Witch, Sweat Hog, REO Speedwagon, and Yes. Stateside, Battle Hymn was released in February 1972 on Reprise. 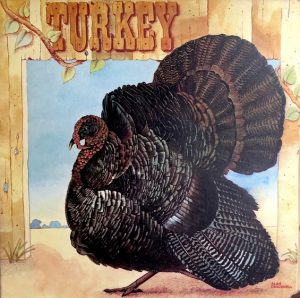 Wild Turkey released their second album, Turkey, in October 1972 on Chrysalis. It contains two Hopkins cuts (“Tomorrows Friend,” “Chuck Stallion and the Mustangs”) and six numbers by Cornick, including “Telephone,” “A Universal Man,” and the lengthy epics “Eternal Mother/The Return” and “See You Next Tuesday.” The opening track, “Good Old Days,” is a group-written number.

Chrysalis released “Good Old Days” as a single, backed with the non-album track “Life Is a Symphony.” The a-side also appears on a Thai maxi-single with cuts by Slade, Blackfoot Sue, and Harry Nilsson.

Wild Turkey did another US tour in late 1972, followed by shows across the UK and Europe throughout 1973 and early 1974. They packed it in with a show at London’s Marquee Club on June 24, 1974, where they played several post-album numbers (“Solder Boy,” “Social World,” “Brother”). In their final months, guitarist Bernie Marsden (ex-UFO) and drummer Kevin Currie (Orange Bicycle, Supertramp) stepped in for the departed Dyche and Jones.

Pickford-Hopkins sang on most of You & Me, the solo album by Ten Years After keyboardist Chick Churchill. During 1974/75, he co-sang on the Rick Wakeman albums Journey to the Centre of the Earth and The Myths and Legends of King Arthur and the Knights of the Round Table. His last appearance for many years was a 1977 live album by the Good Times Roll Band, led by bassist Tetsu Yamauchi (Samurai, Free, Faces).

Tweke Lewis joined Man for their 1973 album Back Into the Future. That same year, Jones (who played in Man before Wild Turkey) appeared on the Chrysalis release Strong In the Sun, the third and final album by Irish folksters Tír na nÓg.

Dyche spent time in the Pat Travers band. In 1978, he played on the Jet Records release Video King by Snips and joined Sniff ‘n’ the Tears for their first two albums, Fickle Heart and The Game’s Up. He later played on albums by Maddy Prior, The Proclaimers, Dire Straits bassist John Illsley, and former Moon vocalist Noel McCalla.

Gurl joined Babe Ruth for their 1975/76 albums Babe Ruth, Stealin’ Home, and Kid’s Stuff, the last two also featuring Marsden. In the early ’80s, Gurl played on recordings by the synthpop combo Victims of Pleasure and Mancunian popsters Any Trouble.

Marsden played on the 1977 album Malice in Wonderland by Paice Ashton Lord, then followed Jon Lord into Whitesnake. He also played on the first two solo albums by Cozy Powell and later surfaced in hard-rockers Alaska.

Currie appeared on two 1977 releases: the Animal Justice EP by John Cale and the second, self-titled album by Burlesque.

Early Wild Turkey members John “Pugwash” Weathers and Graham Hedley Williams joined Graham Bond’s Magick, but only Weathers played on the 1971 release We Put Our Magick On You. In 1972, Weathers joined Gentle Giant in time for their fourth album, Octopus, and served as their drummer and malletist until their breakup in 1980. Williams recorded three late ’70s albums in funk-rockers Racing Cars.

In 1996, Cornick partook in the Jethro Tull tribute disc To Cry You a Song – A Collection of Tull Tales. A decade later, he reformed Wild Turkey with Hopkins, Dyche, and Gurl. A new studio disc, You & Me In the Jungle, appeared in 2006 on Wild Turkey Music Ltd. It also features appearances by Williams, Weathers, and drummer Clive Bunker, a member of Tull during Cornick’s tenure who left one album later after their international breakthrough with Aqualung.

Battle Hymn and Turkey were first reissued during the early 1990s on Edsel Records. In 2013, both reappeared on Esoteric Recordings; the Turkey reissue includes the “Good Old Days” single version and b-side as bonus tracks. Unofficial reissues of Turkey (Progressive Line, Mason) include Marsden/Currie-era live recordings as bonuses.