Iguana was an English brass-rock/funk band from Southampton that released a self-titled album on Polydor in 1972. They later became the backing band for singer Jess Roden.

The roots of Iguana trace back to Southampton beatsters The meddyEVILS, which evolved into The Quik with guitarist John Roberts and drummer Peter Hunt. After three 1967 singles in that configuration, Roberts formed The Globe Show, a septet featuring saxophonist Ronnie Taylor and drummer John Cartwright. After two 1968/69 singles, Roberts called back Hunt and formed Iguana with Taylor, Cartwright (on bass), and trombonist Chris Gower. 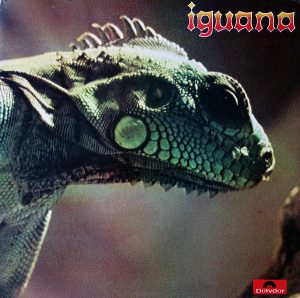 Iguana was produced by Tony Waddington (Toby Twirl, Kathe Green, Dana Gillespie, The Flirtations). Original copies of the LP feature a gatefold cover with brief liner notes that state “IGUANA IS LOOMING.” The brass section recorded their parts in one take with no overdubs.

Four years after the album’s release, the Iguana lineup reappeared as The Jess Rodan Band, backing the singer on the 1976/77 albums Play It Dirty . . Play It Class and Blowin‘.

Gower joined the Rumour Brass, which augmented Graham Parker and the Rumour on the 1977/78 albums Stick to Me and The Parkerilla. The Brass notched further credits with Supercharge, Carlene Carter, Rachel Sweet, Kirsty MacColl, and Shakin’ Stevens.

Cartwright partnered with singer/songwriter Jaki Whitren and they recorded as a husband/wife musical duo, releasing the 1982 album Rhythm Hymn on Elektra, followed in 1983 by International Times on self-press Living Records. In November 2016, the couple died within two weeks of one another from a heart attack (Cartwright) and cancer (Whitren).