Zakarrias was the alias of Austrian Robert Haumer, a singer-songwriter based in London. In 1971, he assembled a makeshift band of English musicians for a self-titled album on Deram. The album features appearances from journeyman keyboardist Peter Robinson (Ablution, Brand X, Quatermass, Sun Treader) and future-Henry Cow saxophonist Geoff Leigh.

Haumer hailed from Vienna, where he sang and played bass in the psych-rock trio Expiration. He wrote both sides of their 1968 single “It Wasn’t Right” (b/w “And the World Will Be a Bird”), released on local-press VRC.

In 1970, Haumer moved to Munich, Germany, where he met English drummer John Lingwood. That fall, they summoned guitarist Huw Lloyd-Langton, who had just left Hawkwind after playing on their debut album. (His departure was provoked by a drink-spiking incident at that year’s Isle of Wight Festival, which caused him to have a nervous breakdown.) Collectively, they formed the power-trio Salt, managed by Israeli poet Samy Birnbach.

Salt rehearsed for six months in Munich, where they built a repertoire of originals composed by Haumer and Birnbach. In early 1971, they moved to London, where Haumer and his wife, Eva, rented a flat in Knightsbridge. Salt cut a demo album at Olympic Studios, but a deal offer purportedly fell through due to the inability of Haumer or Birnbach to obtain work permits.

Unbeknownst to Lloyd-Langton and Lingwood, Haumer used the Olympic demos to secure a solo deal with Deram. Adopting the alias Zakarrias, he rerecorded the material with an impromptu band comprised of keyboardist Peter Robinson, reedist Geoff Leigh, and drummer Martin Harrison.

Robinson hailed from the organ power-trio Quatermass, which issued a 1970 self-titled album on Harvest. Leigh played in blues-rockers Crazy Mabel, which released an album on the Dutch Pink Elephant label. He also appeared on the 1970 release Mouseproof by avant-garde multi-instrumentalist G.F. Fitz-Gerald. 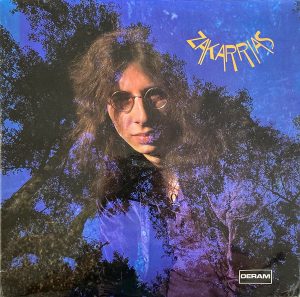 Zakarrias appeared in October 1971 on Deram (UK only). Side one contains two Haumer originals (“Who Gave You Love,” “Never Reachin'”) book-ended by two contributions from Eva (“Country Out of Reach,” “The Unknown Years”). Haumer also wrote “Spring of Fate” on side two, which features two further Eva songs (“Let Us Change,” “Don’t Cry”) and two by Birnbach (“Sunny Side,” “Cosmic Bride”).

Though the songs were conceived for a hard-rock power trio, Zakarrias contains no guitar. Haumer handles bass and kazoo, in addition to vocals. Leigh is credited with saxophone and flute. Despite the psychedelic folk ambience, the songs betray the darkness of their heavier origins.

The Zakarrias front cover sports a faded photo of the bespectacled Haumer over an upshot of trees and deep-blue sky. It was photographed by fashion photographer Daniel Volpeliere-Pièrrot, whose son Ben fronted late-’80s pop band Curiosity Killed the Cat.

The original UK Deram release of Zakarrias (cat# SML 1091) appeared between albums by Clark-Hutchinson (Gestalt) and harmony popsters the White Plains. Only a small number of copies were actually pressed or sold and the album later became one of the biggest rarities of the UK post-psych era.

Haumer returned to Switzerland soon after Zakarrias made its brief appearance. He resurfaced a decade later with the Bobby Hammer Band, which issued the 1981 synthpop single “Modern” (b/w “Zeit Bleibt”) on Lemon Records. In 1987, he issued a solo live cover of The Temptations classic “Papa Was a Rolling Stone.”

Leigh joined avant-rockers Henry Cow for their 1973 debut album Leg-end, then cleared way for bassoonist Lindsay Cooper. However, he guested on Desperate Straights and In Praise of Learning, their 1975 collaborative efforts with Slapp Happy. He also played on the first album by Hatfield and the North.

In 1979, Leigh issued the post-punk EP The Chemical Bank on the Dutch MCCB label. As Daddy Longlegs, he formed The Black Sheep for the 1981 electo-pop EP Animal Sounds Volume One. In 1988, he teamed with Belgian keyboardist Frank Wuyts (Waterloo, Pazop, Aksak Maboul) for the No Man’s Land release From Here to Drums.

In 2006, Leigh stumbled on the Zakarrias Myspace page and commented that he had no recollection of the album or his involvement, but quipped that “those who remember the ’60s probably weren’t there when it happened.” (His involvement, possibly limited to a few hours of session work, was likely due to his connection with Watson from the earlier G.F. Fitz-Gerald project.)

Harrison settled in Germany, where he played on 1974/75 albums by Peter Maffay and Ralf Nowy. He subsequently played on titles by Donna Summer, Roberta Kelly, Herbie Mann, and Sister Sledge.

Zakarrias first appeared on CD in 1990 on Deram Japan as part of that region’s Glory of British Rock series, which also included reissues of titles by Black Cat Bones, The Human Beast, Room (Pre-Flight), T2 (It’ll All Work Out In Boomland), ARC (…At This), Bread Love and Dreams (Amaryllis), and the Parlour Band (Is a Friend?).

The album became more readily available with a series of 2000s reissues on Expertise Records (Liechtenstein), Progressive Line (Australia), and further Japanese Deram pressings. In 2010, UK archivists Cherry Tree reissued the album with a five-page booklet by David Wells, who gathered info from the parties involved in this long-untold story.