Dada was an English brass-rock-soul band that released a self-titled album on Atco in 1970. They featured the husband-wife team of guitarist Pete Gage and vocalist Elkie Brooks. After the album’s release, co-vocalist Paul Korda cleared way for ex-Alan Bown Set singer Robert Palmer. This ushered a reinvention as soul-rockers Vinegar Joe, which released three albums on Island between 1972 and 1973.

Gage started in beatsters The Zephyrs, which issued four 1963–65 singles on Decca and Columbia. He then joined the Ram Jam Band, an R&B sextet that cut multiple 1965–68 singles behind American soul singer Geno Washington.

Brooks cut three singles apiece on Decca and His Master’s Voice between 1964 and 1966. After a stint with jazz bandleader Humphrey Lyttleton, she cut the 1969 NEMS single “Come September” (b/w “If You Should Go”), the b-side written by Gage.

Shinn first appeared in modsters The Soul Agents, which cut four 1964–66 singles on Pye and Polydor. He also recorded with The MeddyEvils, which issued two Pye singles around the same time. In 1969, he released the soul-jazz solo albums Temples With Prophets and Departures on Columbia.

Korda cut his first single on EMI Columbia in 1966 and formed a three-single partnership with Tim Andrews (ex-Le Fleur de Lys). He also supplied a hit for P.P Arnold (“The Time Has Come”) and wrote and produced singles by Hans Christian (aka Jon Anderson) and actor Andy Forray, his castmate in Hair. In 1969, Korda produced the brass-psych band Samson and issued “Seagull,” an ecological ballad covered that same year by Love Sculpture.

Chambers, a native of Trinidad, briefly sang in The Four Kents, an Italian-based R&B vocal group formed by US NATO soldiers.

Duggan hailed from Melbourne, where he hit the Australian jazz scene in 1958. After a two-year residency at the Hotel Raj in Bombay, he settled in the UK. He and Capewell both played saxophone and flute.

Dada — named after the 1910s European avant-garde art movement — completed their nine-piece lineup with trumpeter Ernie Luchlan and drummer Martyn Harryman. They signed with the ATCO division of Atlantic Records and recorded their album at London’s Olympic and Morgan Studios. 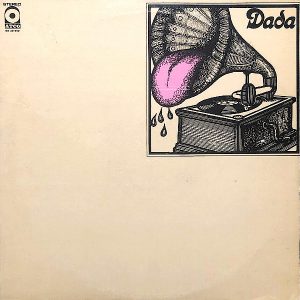 Dada released their self-titled album in 1970 on ATCO (UK, US, Canada) and Atlantic (Australia). The album contains nine proper songs in the 3-4 minute range and two 54-second organ miniatures. Korda co-wrote two songs apiece with Gage (“Big Dipper,” “This Is My Song”) and Shinn (“Seed of Peace,” “Tonite Is”) and lone-wrote the closing numbers “Jasamin” and “Dada.” Shinn contributed “Organ Interlude” and “Eyes of the Warren.” Gage composed “She Walks Away” with one Zagni. Dada also contains covers of The Rolling Stones (“The Last Time”) and Tony Joe White (“Aspen, Colorado“).

Dada sports a beige cover designed by one Dave Williams. The upper-right corner has a sketch of a vintage gramophone with a tongue dripping from the horn. The same image appears on the back, surrounded by credits and select quotes on the meaning of Dada by figures within the movement, including Tristan Tzara (“Only Dada can enable you to escape from destiny,” Dada Manifesto, 1918), Hugo Ball (“We should burn all libraries…,” 1916), André Breton (“Dada is a state of mind,” 1922), and Richard Huelsenbeck (“Dada is shaking the world of today,” 1936).

“The Last Time” appears on the 1970 comp The Age of Atlantic with cuts by the Allman Brothers Band, Vanilla Fudge, Cold Blood, Led Zeppelin, Iron Butterfly, and Yes. “Big Dipper” appears on the Dutch Atlantic Special comp The Perfumed Garden with tracks by the aforementioned artists, plus Blues Image, Cactus, Hammer, and the Velvet Underground.

Soon after the album’s release, Korda split over musical differences. Dada hired 20-year-old singer Robert Palmer, who premiered on the 1969 second album by the Alan Bown Set. The Palmer lineup toured the US during the summer of 1970.

Upon their return to the UK, Shinn departed and the frontal core of Brooks, Gage, and Palmer formed Vinegar Joe, a soul-rock band that issued three albums on Island in 1972/73. Palmer went solo with his 1974 Island release Sneakin’ Sally Through the Alley. Brooks did likewise with her 1975 A&M release Rich Man’s Woman.

Shinn played electric piano on “Past Orbits of Dust,” the closing 14-minute piece on Illusion, the 1971 second album by Renaissance (recorded by multiple lineups). In 1972, he reteamed with ex-Soul Agents colleague Pete Hunt in the brass-funk combo Iguana, but left before their self-titled album on Polydor. (Iguana later served as the backing band of Palmer’s predecessor in the Alan Bown Set, Jess Roden).

Korda released his first solo album, Passing Stranger, in 1971 on MAM with backing by Ray Russell and Forever More. In subsequent years, he played on albums by Rare Bird (Epic Forest) and Roger Daltery. His second solo album, Dancing in the Aisles, appeared on Janus in 1978.

Chambers sang on the 1974 Cube Records release I See the Light by the UK-based Trinidadian funk-psych band Batti Mamzelle. After a pair of late-’70s soul-funk singles, he joined Brit funksters Central Line for their 1981 debut album Breaking Point. A decade later, he surfaced in the dance-pop act Londonbeat, responsible for the 1991 Billboard chart-topper “I’ve Been Thinking About You.”

Duggan played on the 1973 Virgin release Manor Live by Steve York’s Camelo Pardalis, which also features Brooks and members of Patto, Piblokto, and King Crimson. He then spent two years with Australian rockers Max Merritt and the Meteors during their late-period UK residency. In 1976, he returned to Australia and joined Jazz Co-Op, a jazz-funk ensemble headed by keyboardist Roger Frampton.

Capewell returned to Australia immediately after Dada and joined bassist Charles Tumahai (later of Be-Bop Deluxe) in psych-rockers Healing Force, which cut the 1970 single “Golden Miles” (b/w “The Gully”). He also did stints in Might Mouse and blues-rockers Carson.

Dada got its first CD reissue in 1991 on Linea Records (Germany). In 2000, Russian bootleggers Collector’s Digitally Recordings pressed Dada on CD-r along with titles by Affinity, Asterix, Babe Ruth, Battered Ornaments, Birtha, and Cornucopia. Both CD issues zoom the gramophone image to full-cover. In 2010, Dada got an official reissue by US archivists Wounded Bird Records with the cover restored to its original arrangement. Further CD issues have also appeared on Atlantic (Japan, 2015) and Esoteric Recordings (Europe, 2016).