East of Eden was an English folk-rock/psych band from Bristol that released the 1969/70 Deram albums Mercator Projected and Snafu, followed by the 1971 Harvest titles East of Eden and New Leaf. An additional four albums appeared on Harvest/EMI Electrola between 1975 and 1978. Violinist Dave Arbus played on the FM evergreen “Baba O’Riley” by The Who.

East of Eden was formed in 1967 by violinist Dave Arbus (b. 1941), who also played reeds and trumpet. Founding members included saxophonist Ron Caines (b. 1939) and guitarist/singer Geoff Nicholson (b. 1948). They initially gigged as Pictures of Dorian Gray, then adopted the name of the 1952 novel East of Eden by American author John Steinbeck.

In 1968, East of Eden debuted with “King of Siam” (b/w “Ballad of Harvey Kaye”), a limited-press single on Atlantic with brief-serving vocalist Al Read. The original rhythm section cleared way for bassist Steve York (b. 1948) and drummer Dave Dufort (b. 1947). They appeared in the 1969 French drama Laughter in the Dark. 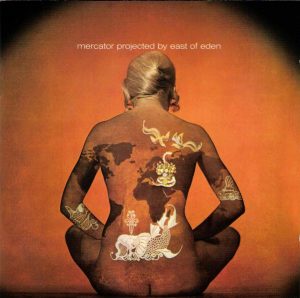 East of Eden released their debut album, Mercator Projected, in 1969 on Deram (UK, US, CN, NZ, DE, FR, ZA). Of the eight numbers, Caines lone-wrote four — “Northern Hemisphere,” “Waterways,” “Bathers,” “Moth” — with co-writes by York (“Centaur Woman”) and Arbus (“Communion”). Caines, York, and Nicholson collaborated on the ballad “Isadora.” The closing epic, “In the Stable of the Sphinx,” is a group-written piece.

Mercator Projected was produced by longtime Decca staffer Noel Walker, who also worked on 1969 recordings by Amen Corner, The Idle Race, and Trifle. The album was engineered by Derek Varnals with assistance from Adrian Martins, who jointly worked on concurrent albums by Kathe Green, the Keef Hartley Band, Martha Veléz, The Moody Blues, Web, and the World of Oz.

Arbus — who plays electric violin, flute, bagpipes, and recorder — is credited with playing “two saxophones at once,” in addition to “lavatory.” York plays harmonica and Indian thumb piano, in addition to bass. Caines arsenal consists of organ and both acoustic and amplified soprano and alto saxophones.

Mercator Projected sports a cover supplied by the Decca Publicity Art Department. It shows the backview of a female nude seated Indian style in an orange-lit setting with projections of a silhouetted Earth spread and Eastern sea art, cast to resemble tattoos. The back features b&w medium-shots of the group in pharaoh garb with liner notes that state “Take one electric violin which blows rock and Bartok, add one flute from the East, mix in Sumerian saxophones, bass, drums, guitar and liquid world-pictures—mark East of Eden.”

CD pressings of the album on Eclectic Discs and Esoteric Recordings add July 1968 demos of “Waterways” and an elongated “In the Stable of the Sphinx” (11:10), plus a 1969 studio recording of the Byrds staple “Eight Miles High.”

Deram lifted “Northern Hemisphere” as a single, backed with “Communion.” The b-side appears on Wowie Zowie!, a 1969 Decca comp with cuts by Genesis, John Mayall, Savoy Brown, and Touch.

Between the first and second albums, York and Dufort cleared out for bassist Andy Sneddon and drummer Geoff Britton. York joined Manfred Mann Chapter Three for their two albums (1969/70) and surfaced in Vinegar Joe for a three-album run (1972/73). Dufort played on 1971/72 albums by Lol Coxhill and Kevin Ayers and later surfaced in the NWOBHM band Angel Witch. 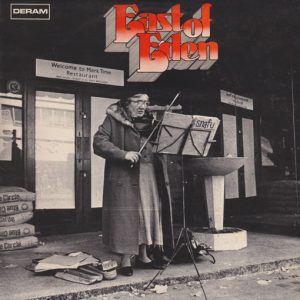 Everything was group-composed apart from snippets of Charles Mingus (“Better Git It”), Don Drummond (“Marcus,” “Confucius”), and John Coltrane (“Ramadhan”). The album closes with the descriptively titled “Traditional: Arranged by East of Eden.”

East of Eden self-designed the Snafu cover: a b&w picture of an old lady violinist, busking outside a closed restaurant on a rundown street with sheet music marked “SNAFU.” The back features medium performance pics of each member and a review of the album by Richard Williams of Melody Maker, who places East of Eden in the same class as Frank Zappa and Burnin’ Red Ivanhoe as acts with “their hearts and heads set firmly in the right place” regarding jazz/rock fusion. 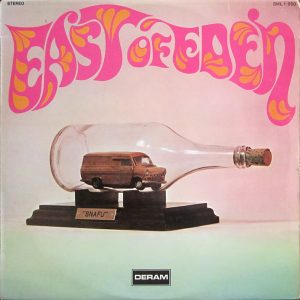 European copies sport an alternate cover with a toy van inside a corked, horizontal bottle with the nameplate in pink bubble letters, adorned with orange teardrops. The group photo on back shows Arbus at the center in trademark hasidic attire.

Deram issued two singles from Snafu: “Jig-a-Jig” (b/w “Marcus Junior”) and “Ramadhan” (b/w “Have to Whack It Up”). “Jig-a-Jig” reached #7 on the UK Singles Chart in early 1971. The song appears on multiple 1970/71 Decca/Deram comps, including The World of Rock, which also features cuts by Clark Hutchinson, Crow, Frijid Pink, Human Beast, and UFO.

In late 1970, Arbus assembled a new East of Eden lineup with guitarist Jim Roche, bassist David Jack, and drummer Jeff Allen. Roche was a formative member of Colosseum but left after playing on one track (“Backwater Blues”) on their debut album. Allen hailed from The Beatstalkers, a ’60s Glaswegian act that hopped the German club circuit. 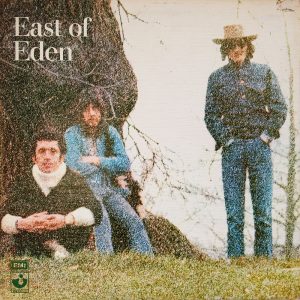 To signal the fresh start, Arbus titled his group’s third album East of Eden. It appeared in early 1971 on Harvest (UK, US, Europe, Oceania) and Odeon (Japan). The album contains seven songs, mostly in the 5–6-minute range and all credited to Jack, including “Crazy Daisy,” “To Mrs. V,” “Take What You Need,” “Wonderful Feeling,” and “Goodbye.”

Hipgnosis, repsonsible for numerous Harvest visuals (The Going’s Easy, Quatermass, The Electric Light Orchestra, Meddle) designed the gatefold cover to East of Eden. It’s an embossed, grainy image of the four members positioned at the base of a tree under grey sky. The inner-spread shows b&w group and member pics.

Arbus’s violin work caught the attention of Who drummer Keith Moon, who invited him to play on the upcoming Who’s Next. His alternately smooth and frenzied playing is heard while the instrumental section heads toward the climax on “Baba O’Riley,” an FM evergreen and one of The Who’s most recognized songs.

Headstone
Headstone were an English hard-rock band that released the album Bad Habits on EMI in 1974, follow...
Isotope
Isotope was an English jazz-rock band that released three albums on Gull between 1974 and 1976. Guit...
Flashman
Flashman were an English cabaret/art-pop trio that released a self-titled album on Pye/Vanguard in...
Esther Satterfield
Esther Satterfield (born 1946) is an American soul singer from NC. Discography: Once I Love...
Moonstone
Moonstone were an American symphonic/hard-rock band from Lancaster, Penn., that issued a standalo...