Ancient Grease was a Welsh hard-rock/psych band that was active between 1967 and 1970. The band’s singular album, Women and Children First, appeared on Mercury during their final year together. Frontman Gareth “Morty” Mortimer later headed Rhondda funk-rockers Racing Cars for three albums during the late ’70s.

In 1969, Strawberry Dust was spotted in Swansea by Eyes of Blue drummer John Weathers, who booked them time at Rockfield Studios in Monmouth, where EoB backed American singer Buzzy Linhart on his 1969 debut album Buzzy. Undeterred by Strawberry Dust’s lack of originals, Weathers selected a Linhart song for them to cover as a demo. He took the tape to Buzzy producer Lou Reizner, who secured a deal for Strawberry Dust with Mercury Records.

They recorded their album over a week-long series of midnight-to-six sessions at Rockfield, which had just acquired a 16-track recorder. Weathers, who produced the album, supplied them with material that he’d stockpiled during his time with Eyes of Blue; numbers he felt were more suited to the rockier approach of Morty’s band. As the record went to press, Linhart picked a new name for the band, Ancient Grease, a pun on Ancient Greece. 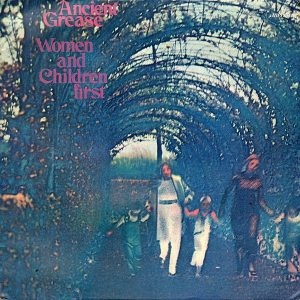 The side one closer, “Where the Snow Lies Forever,” was written and arranged by EoB keyboardist Phil Ryan. The centerpiece on side two, “Prelude to a Blind Man,” came from Greg Curran, a friend of Weathers. 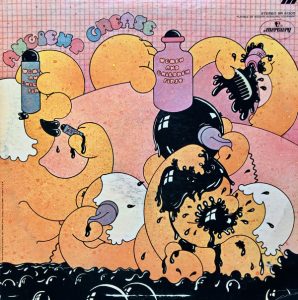 Weathers produced Women and Children First single-handedly, though Reizner claimed credit as a co-producer. On select cuts, Weathers and Pickford-Hopkins appear as musical guests. UK and Dutch copies sport a blue-saturated photo of a family walking through a garden arbour. US and Canadian copies show an image of rounded yellow cartoon characters rolling in black grease.

No singles were released from the album. However, the song “Women and Children First” appears on the 1971 Mercury comp Dimension of Miracles with cuts by David Bowie, Rod Stewart, and the American acts Broth, Trilogy, Gator Creek, Second Coming, Buddy Miles, and JD Blackfoot. Despite this, Women and Children First received no promotion from Mercury UK, which placed most of its resources behind Stewart’s first two albums, An Old Raincoat Won’t Ever Let You Down and Gasoline Alley.

The band returned to the South Wales club circuit as Strawberry Dust and disbanded in early 1971 when Williams — along with Weathers, who joined the final lineup of Pete Brown’s Piblokto! after Eyes of Blue folded — joined the formative lineup of Wild Turkey, assembled by Jethro Tull bassist Glenn Cornick. Before that launched, the pair jumped ship to Graham Bond’s Magick, but this arrangement didn’t gel. Weathers joined Gentle Giant in 1972.

Meanwhile, Morty took up songwriting in another band, Good Habit. After that ran aground, he phoned Williams for a new project that evolved into Racing Cars. By 1976, they moved to London and signed to Chrysalis. They released three albums — Downtown Tonight, Weekend Rendezvous, and Bring on the Night — and scored a 1977 UK Top 20 hit with “They Shoot Horses Don’t They?”

Women and Children First got its first official CD reissue in 1993 on Repertoire Records. It has since appeared on Angel Air Records (Europe) and Air Mail Archive (Japan). All CD versions contain a bonus alternate take of “Freedom Train.”

SRC
SRC were an American psych-rock band from Ann Arbor, Mich., that released three albums on Capitol...
Contraction
Contraction was a Québécois symphonic/jazz/folk band that released a self-titled album on Columbia...
The Chi-Lites
The Chi-Lites were an American soul group from Chicago, formed in 1959. After a string of 1965–68 ...
Beau
Beau is the performance moniker of John Trevor Midgley, an English singer-songwriter who released th...
Jack Bruce
Jack Bruce (1943— 2014) was a Scottish-born bassist, vocalist, and composer who played in a series...