Marsupilami was an English post-psych six-piece band that released two albums on Transatlantic Records in 1970 and 1971.

Marsupilami emerged in Taunton, Somerset, in 1968 as the outgrowth of R&B rockers Levitation, which featured Anglo-French keyboardist Leary Hasson. That year, Levitation toured Southern Spain with the last-minute addition of Hasson’s brother, Fred, a former choir singer who assumed the mic from their deserter frontman. 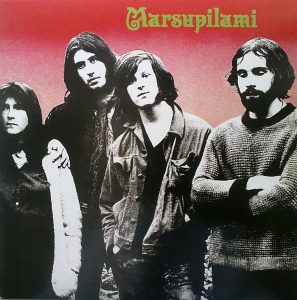 Marsupilami released their self-titled debut album in April 1970 on Transatlantic (UK, NZ). It features five lengthy songs, mostly by chief writer Laverock, who wrote two numbers (“And the Eagle Chased the Dove to Its Ruin,” “Facilis Descencus Averni”) and partnered with Fred Hasson on the opener, “Dorian Deep.” Leary Hasson composed the 10-minute “Ab Initio ad Finem (The Opera)” and collaborated with the other two on “Born to Be Free.”

The Marsupilami cover layout is attributed to the design firm Diogenic Attempts Ltd., also credited on the 1970 debut album by Atomic Rooster. The album’s catalog number (TRA 213) placed it between label titles by ex-Deviants singer Mick Farren (Mona – The Carnivorous Circus) and the live in-studio free jazz session attributed to The People Band.

For their next album, Marsupilami added singer/lyricist Bob West and German reedist Mandi Riedelbauch. They teamed with ex-Them and future Camel keyboardist Peter Bardens, who made two 1970/71 solo albums as a solo artist on Transatlantic. 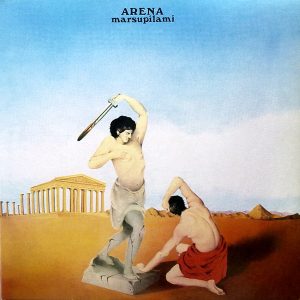 Marsupilami’s second album, Arena, appeared in 1971 on Transatlantic. As on the preceding album, side one contains three songs, this time co-written by Leary Hasson and West: “Prelude to the Arena,” “Peace of Rome,” and “The Arena.” Fred Hanson collaborated with the pair on “Time Shadows,” which shares side two with the group-composed “Spring.” The songs concern the barbaric nature of the Roman Empire.

Clarke played a fictional flutist, Jessica, in the 1973 Doctor Who serial The Green Death. Under her married name Jekka McVicar, she became a herb cultivator and renowned horticulturalist.

Fred Hasson went into media and served as Head of Corporate Relations in the BBC Regional Broadcasting Directorate. In 2001, he became the CEO of TIGA (The Independent Games Developers Trade Association).

Marsupilami and Arena first appeared on CD in 1989 on the German Line label. Both albums have since been reissued multiple times on different regional archivist labels, including four reissues apiece on Esoteric Recordings.