The Masters Apprentices were an Australian rock band from Adelaide that emerged as one of the nation’s premiere beat groups. They issued five singles and one album on Astor between 1966 and 1968, including the Aussie rock classics “Undecided,” “Wars or Hands of Time,” and “Elevator Driver.” After a change in lineup, they advanced into […] 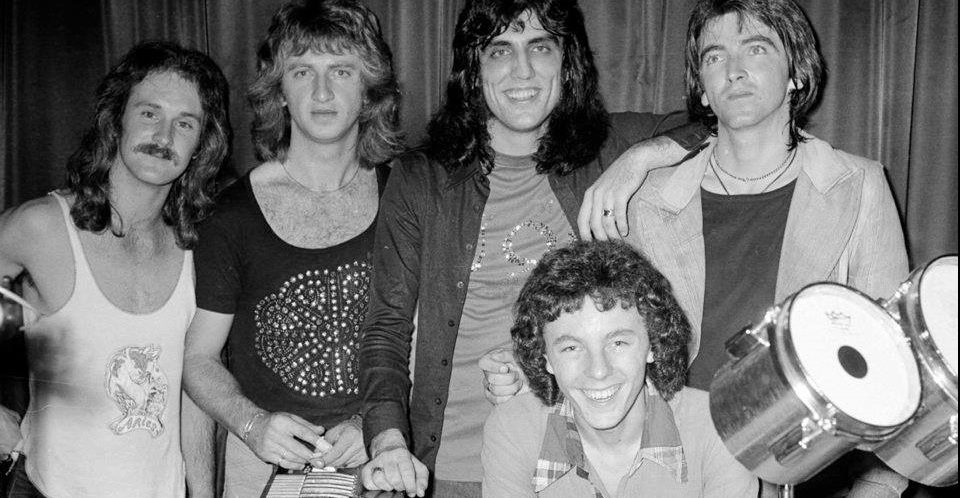 The James Taylor Move were an Australian pop-psych band from Adelaide that issued two singles on Festival Records in 1967, followed by a stint as the backing act for blues singer Wendy Saddington. Guitarist Kevin Peek and rhythm players Alan Tarney (bass) and Trevor Spencor (drums) moved to the UK where they teamed with fellow […]

Fanny Adams were a hard-rock/blues band comprised of Australian musicians based in London, England. Guitarist Vince Melouney was a founding member of the Aztecs and served in the 1967–68 lineup of the Bee Gees. Vocalist Doug Parkinson had fronted his own psych-rock band In Focus, which also included Welsh-born drummer Johnny Dick, who did prior […]

The Saints were an Australian rock band from Brisbane that issued the punk single “I’m Stranded” on self-press Fatal in 1976, followed by three albums on Harvest between 1977 and 1978. A further round of albums appeared on assorted labels during the 1980s, culminating with a second career-wind on Mushroom during the latter part of […]

Samantha Sang (born Aug. 5, 1953) is an Australian singer and entertainer from Melbourne who released three albums between 1975 and 1979. Her duet with writer/producer Barry Gibb yielded the lush, calypso-flavored “Emotion” — one of the biggest global hits of 1978. Discography: Samantha Sang and Rocked the World (1975) Emotion (1978) From Dance to […]

Steve Kipner (born 1950) is a U.S.-born Australian songwriter, producer, and former singer with a career in music that dates back to the mid-1960s. He first emerged as the namesake frontman of the antipodean beat combo Steve & the Board. In the early 1970s, he made headway in the Northern Hemisphere with the pop trio […]

Steve Maxwell Von Braund is an Australian keyboardist and saxist who recorded the album Monster Planet for the Clear Light of Jupiter label in 1975. Soon thereafter, he formed the electronic trio Cybotron, which recorded three albums between 1976 and 1980. Discography: Monster Planet (1975)

Sherbet were an Australian pop-rock band from Sydney that released five studio albums on Infinity between 1972 and 1976, followed by Photoplay on Festival in 1977 and an eponymous album on their own namesake imprint in 1978. The last two albums were respectively issued as Magazine on MCA and Highway on RSO. The band briefly […]

The Moodists were an Australian New Wave band from Melbourne that released two singles and an EP on Au-Go-Go Records circa 1981/82, followed by another round of shortplayers on Red Flame and T.I.M. between 1983 and 1987. The band’s only proper album, Thirsty’s Calling, appeared on Virgin in 1984. Members: Dave Graney (vocals), Steve Miller […]

The Moirs were an Australian vocal trio comprised of Scottish-born sisters Jean, Margot, and Lesley Moir. In 1975, they released the album Lost – Somewhere Beyond Harmony as the Moir Sisters on EMI, followed in 1978 by the album State of Shock as The Moirs on Elton John‘s Rocket label. Members: Jean Moir (vocals), Margot […]