Zorch were an English electronic duo that formed as a four-piece in 1973, eventually pairing down to keyboardists Basil Brooks and Gwyo Ze Pix. In 1975, the pair recorded an album’s worth of material that was ultimately released a quarter-century later as Ouroboros on Zorch Records. 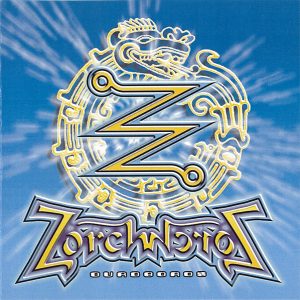 “Electro Flow” (6:10) is framed by trebly, Clavinet-like synth arpeggios that interlock in a 48-bar F/B♭/Gm/Am/Dm/E♭ progression, soon overlaid with cosmic and celestial runs.

Along with Wavemaker and Tim Blake, Zorch were among the few U.K. purveyors of electronic music during the mid-to-late 1970s. Unlike the German acts of the time (Tangerine Dream, Klaus Schulze, Ash Ra Temple) that relied mostly on tonal colors, the material on Ouroboros is built around chordal patterns and harmonic layers that reveal the duo’s English melodic sensibilities. The disc indicates what might have been had more U.K. acts of the era explored this very European vein of music.