Writing On the Wall was a Scottish post-psych band that released a standalone single and the album The Power of the Picts on Middle Earth in 1969. Four years later, the band released a one-off single on Pye.

They formed in 1967 in Edinburgh as The Jury, a soul-psych group comprised of singer Linnie Paterson, guitarist Willy Finlayson, drummer Jimmy Hush, bassist Jake Scott, and keyboardist William “Bill” Scott. Their early set was a mix of covers (“Peter Gunn”) and group-written originals (“Words and Music”) in an organ-drenched Animals vein.

In early 1968, they changed their name to Writing on the Wall and moved to London. They played the Middle Earth Club, a converted cellar on King Street that featured the day’s leading psych acts: The Bonzo Dog Band, The Crazy World of Arthur Brown, The Deviants, July, The Move, Pink Floyd, The Pretty Things, Soft Machine, Tomorrow, and Tyrannosaurus Rex.

That fall, they did a session for the 12/8/68 broadcast of the BBC Radio One music program Top Gear hosted by John Peel. Their set comprised five numbers: the band originals “Taskers Successor,” “Shadow of Man,” “Profile of a Door,” “Felicity Jane,” and the Small Faces‘ “Sha La La La La Le.” After police raids forced Middle Earth’s closure, club and band manager Brian Waldman signed Writing On the Wall to his new Middle Earth label.

Writing On the Wall made their vinyl debut with the non-album single “Child On a Crossing” (b/w “Lucifer’s Corpus”), released in October 1969 on Middle Earth. 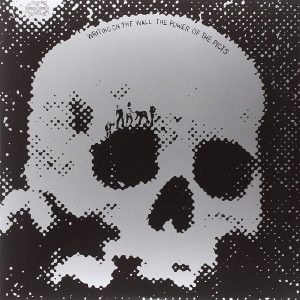 Their album, The Power of the Picts, appeared the following month on Middle Earth (UK), Astor (Australia), and Disques Vogue (France). It features nine songs in the 3–6-minute range, including the Scott/Scott “Shadow of Man,” the group-written “Ladybird,” the traditional “Aries,” and the Smiggy-penned opener “It Came On a Sunday.”

The Power of the Picts and the preceding single were produced by arranger/conductor Dave Howson, who also produced the album and single for fellow Middle Earth signees Arcadium. The original release of Picts (cat# MDLS 303) directly followed Arcadium’s Breathe Awhile  (cat# MDLS 302). Along with A Handeful of Pleasant Delites  by the folk duo Wooden O (#301) and the self-titled release by Tam White (#304), these were the label’s only albums in its two-year existence.

Garrod & Lofthouse printed the textured cover art, which shows a pixelated xerox of a skull pic. The five band members cavort above its right eye socket.

Writing On the Wall continued as a popular live act with Smiggy in lieu of Finlayson. However, Waldman kept them contract-bound despite the collapse of his label. In early 1972, Paterson and Smiggy quite over musical differences. Hush and the Scott’s reinstated Finlayson and continued as a four-piece. They demoed new material at their shared Victorian house on Burghley Road in West London.

In 1973, Writing On the Wall landed a deal with Pye Records that yielded one single, “Man of Renown” (b/w “Buffalo”), both J. Scott/Finlayson compositions. The a-side was produced by Don Lawson and Biddu. The b-side (4:20) was extracted from a longer composition (6:54).

That December, Writing On the Wall headed to Wales to make a new album. The plan got thwarted by the theft of their equipment, which left the cash-strapped band no other choice but to call it a day.

After Writing On the Wall

Linnie Paterson joined fellow Scots Beggars Opera for their 1973 fourth album Get Your Dog Off Me.

Robert “Smiggy” Smith did a brief stint in Cliff Bennett’s Rebellion and joined Scottish popsters Blue for their 1974 release Life In the Navy. As an engineer, he worked on 1976/77 albums by Grateful Dead frontman Jerry Garcia, Starsky & Hutch actor David Soul, American hard-rockers Yesterday & Today, Australian rustic-rockers The Dingoes, and the pre-Perry Journey (Next).

The Power of the Picts was first reissued on CD in 1992 on Repetoire (Germany), which re-pressed the disc thrice more through 2000. During the noughties, the disc reappeared on CD and LP on Arkama (Italy) and Alkinous Ltd (Russia). Most reissues add both sides of the 1969 Middle Earth single as bonus tracks.

Four discs of archival material have surfaced since the band’s 25th anniversary:

In 2007, UK archivists Ork Records issued The Power of the Picts as a two-CD set with a second disc titled Buffalo, which collects material from the Tenth Planet releases. Belle Antique (Japan) reissued the double-disc in 2021.