Womega was a Belgian jazz-rock/soul band that released the album A Quick Step on self-press Skruup Records in 1975. The band was active until 1981, releasing two locally-pressed singles after their singular album. 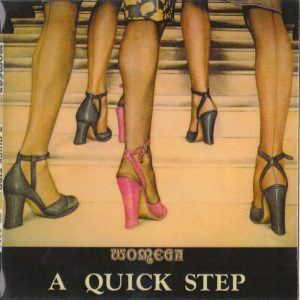 Womega was formed in 1974 in Bilzen, Limburg, by the Flemish Vanlessen brothers. In October 1975, the seven-piece recorded A Quick Step at Acorn Studio in Oxford, England. They issued the album later that year on their exclusive Skruup Records label. It features eight originals, including “Christo Said,” “Sweet Sleeping Sixteen,” “Tu Quoue,” and “Nympho’s Belly Button.” The material is primarily credited to keyboardist/producer Paul Vrijens with co-writes on three tracks by woodwindist Paul Peters. The artwork was designed by guitarist Jos Vanlessen.

In 1976, Womega issued the single “Don’t Work Yourself” (b/w “Doctor Make Me Well”) on Belgian EMI. This would be their last release until the 1980 single “Two Red Lights” (b/w “Emma”), once again on Skruup. By then, brother Jen Vanlessen had switched from bass to drums, clearing way for new bassist Fa Vanham. They disbanded soon after with Vanham going on to back local pop singer Jo Lemaire.

A Quick Step was reissued in 2015 by German archivists Paisley Press.