Westwind was an English folk trio that released the album Love Is… on the Penny Farthing label in 1970. 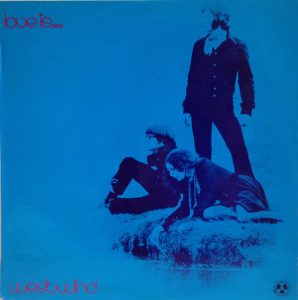 Westwind’s singular album, Love Is…, appeared in 1970 on Penny Farthing (UK, Oceania). The album sports an azure-tinged monochrome waterside shot of the trio. The back features liner notes by journalist Peter Robinson of Music Business Weekly.

Love Is… contains six songs per side in the 2–4-minute range, including one about the Victorian penny dreadful villain Sweeney Todd. The songs concern seafaring woes, wildlife-romance metaphors, vintage travel vignettes, and natural disasters.

Nothing more was heard from Westwind. Stowell resurfaced in a duo with folkie Julie Mairs.  They issued one album, Soft Sea Blue, in 1977 on Cottage Records, a Daventry-based folk label that also issued albums by Brandywine Bridge and Magenta.

Love Is… was first reissued on CD in 2001 on Elegy, a short-lived UK archivist label that also excavated titles by Aubrey Small, C.O.B., Frogmorton, Justine, Synanthesia, and Wooden Horse. On this release, one Johnny Watson and one Michael Moores (no further credits according to Discogs) are identified as the album’s arranger and arranger/director, respectively.