West Wing was an American soul group that released a self-titled album on 20th Century in 1975, produced by Barry White.

West Wing was one of several mid-’70s projects overseen by musician and producer Barry White (Love Unlimited, Love Unlimited Orchestra, Tom Brock, White Heat). In 1973, he produced the foursome’s standalone single “Falling In Love Is a No No Baby” for 20th Century. The song is co-credited to White, Blanchard Montgomery, Thomas Brocker, and R. Relf. Their name is spelled Westwing on this release. 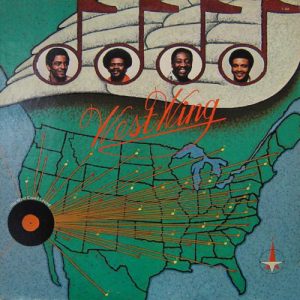 In 1975, White produced the album West Wing for 20th Century. Five of the eight songs are credited to the team of Horace Coleman (Tavares, The Whispers, Shalamar), Thomas Anderson and Vance Wilson (Gloria Scott, Jay Dee), inlcuding “She Loves Me (That’s What the Flower Said),” “I Wanna Thank You, Love,” and “I Got a Love for You.”

The White composition “I’m Gonna Love You Just a Little Bit More Baby” originally appeared on his 1973 release I’ve Got So Much to Give. Arrangements on the album are credited to Vance, Jack Eskew (El Chicano), and Gerald Lee (Eddie Harris, Candi Staton, Promises, Patti LaBelle). As on most White-associated releases, industry mogul Larry Nunes is credited as “spiritual advisor.”

West Wing was reissued for the first time in 2018 by Mercury Japan as part of the label’s Diggin’ Universal Music series.