Web was an English jazz-rock/psych band that released the 1968/69 albums Fully Interlocking and Theraphosa Blondi (as The Web) on Deram, followed by the 1970 release I Spider (without the definite article) on Polydor. They morphed into Samurai for a 1971 self-titled album on Greenwich Gramophone.

Web coalesced from a pool of unrecorded Bournemouth R&B/beat acts that also involved the pre-history of King Crimson. Guitarist John Eaton played in The Indigos with drummer Andy McCulloch. Eaton then joined guitarist Tony Edwards in The Tallmen, which interacted with Zoot Money’s Big Roll Band and the Giles brothers on the south sea circuit. Drummer Kenny Beveridge played in combos with Greg Lake and Robert Fripp.

(The Giles brothers and Fripp recorded as Giles Giles and Fripp. Lake and McCulloch cut singles in the Shy Limbs. In 1969, Lake joined Michael Giles and Fripp in the first King Crimson lineup that made In the Court of the Crimson King. McCulloch joined a subsequent, Lake/Giles-less KC lineup for their 1970 third album Lizard.) 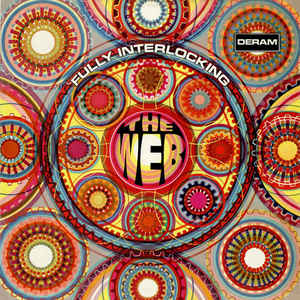 The Web released their first album, Fully Interlocking, in August 1968. Side one contains six tracks, including “Green Side Up,” “City of Darkness,” “Harold Dubbleyew,” and their first a-side, “Hatton Mill Morning.” Side two contains three short songs (“Reverend J. McKinnon,” “Sunday Joint,” “Watcha Kelele”) and the nine-minute War or Peace suite, comprised of five sections. Part four, “Conscience,” was extracted as the “Hatton” b-side. Eaton co-wrote 10 of the 14 numbers.

Vernon’s production of Fully Interlocking overlapped with his work on albums by Fleetwood Mac (Mr. Wonderful) and Ten Years After (Undead). The album was engineered by Derek Varnals, a technical hand on Days of Future Passed. Arranger Terry Noonan (Keef Hartley Band) handled orchestration on the War or Peace suite and composed its intro theme.

The album’s cover, a display of psychedelic mandalas arranged as cogs, is credited to the Decca Publicity Art Department. The back contains liner notes by Vernon and five additional industry heavyweights, including Dave Dee, Mickie Most, and Manfred Mann singer Mike D’Abo, who especially liked the segue between “Wallpaper” and “Did You Die Four Years Ago Tonight?” 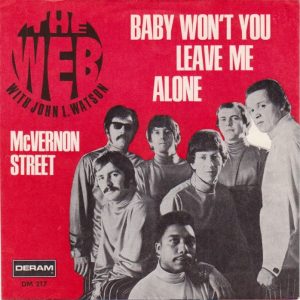 In November 1968, they issued the non-album single “Baby Won’t You Leave Me Alone” (b/w “McVernon Street“). They’re listed on this release as “The Web with John L. Watson.” The single sports a different sleeve on each Continental pressing, including a German issue with a b&w group photo against a red backdrop. 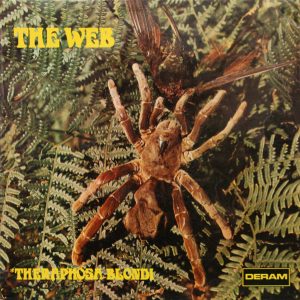 The Web’s second album, Theraphosa Blondi, appeared in 1969 on Deram. Side one contains the seven-minute Wright original “Like the Man Said,” an extended cover of the Cream classic “Sunshine of Your Love,” and the Gilbert O’Sullivan song “‘Till I Come Home Again Once More.”

Side two contains a track apiece by Eaton (“1,000 Miles Away”), Harris (“Blues for Two T’s”), an Eaton/Wright co-write (“Kilimanjaro (African Lullaby)”), and the group-written “Bewala.” A medley of “Tobacco Road” and the Bernstein/Sondheim number “America” (from West Side Story) closes the album. Most of the tracks feature mallet percussion (vibraphone and occasional marimba/xylophone), played by Wright and sometimes Harris.

Photographer Terence Ibbott took the cover shot of the Theraphosa blondi arachnida, a South American Goliath birdeater of the tarantula family Theraphosidae. Ibbott’s photography can also be seen on 1969 albums by ‘Igginbottom, Synanthesia, Ashkan, Fleetwood Mac (Then Play On), and a slew of titles that also involved Vernon and/or Varnals, including albums by Martha Velez, Kathe Green, Savoy Brown, and Chicken Shack. 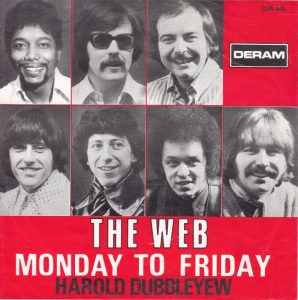 In May 1969, they issued the non-album a-side “Monday to Friday,” backed with “Harold Dubbleyew” from Fully Interlocking. Late that year, Eaton replaced the departing Lee-Smith on bass. Watson, intent on a solo career, cleared out for singer and keyboard player Dave Lawson. The revised six-piece proceeded simply as Web. 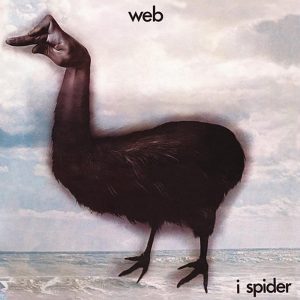 Web signed to Polydor and released I Spider in November 1970. Side one features the eight-minute title track and the 10-minute “Concerto for Bedsprings,” divided into five parts. Side two contains two medium-length tracks (“Love You,” “Ymphasomniac”) and the lengthier “Always I Wait.” Lawson, who handles organ, piano, harpsichord, and Mellotron in addition to vocals, composed the entire album.

I Spider was produced Wright, who plays vibraphone, tympani, congas, and guiro in addition to drums. Sessions took place at Wessex Sound Studios in Highbury, London, where the album was engineered by brothers Mike and Robin Thompson (Cressida, Brainchild).

The gatefold shows human hands in lieu of heads on three different animals: a chicken (front) and two foxes (back), all afoot on air or clouds. The inner-spread has all the lyrics over a b&w group shot. Photographer Robin Clifford took visual credit on this and the following Samurai release.

Harris left Web after I Spider. The remaining quintet continued as Samurai and released a self-titled album on Greenwich Gramophone in 1971. Lawson then formed Greenslade with McCulloch and members of Colosseum. Harris resurfaced on the 1985 album Waking Up by ex-Clash drummer Topper Headon.

Watson released the 1970 album White Hot Blue Black on Deram, produced and conducted by the Vernon/Varnals/Noonan team with backing by Pete Wingfield, Rick Hayward, and session bassist Herbie Flowers (Rumplestiltskin, Hungry Wolf). After assorted singles on EMI and Delta, he returned with the 1975 Spark release Let’s Straighten It Out.