Walrus was an English brass-rock band that released a self-titled album on Deram in 1970, followed by a standalone a-side in 1971. 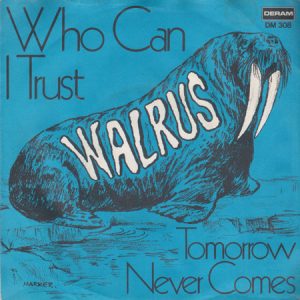 Decca records, basking in the success of UK brass rockers Galliard and the Keef Hartley Band on its progressive Deram imprint, took an interest in the new London octet. Walrus signed with Deram in June 1970 and entered Decca’s West Hampstead Studios with rookie producer David Hitchcock.

Walrus made their vinyl debut with the August 1970 single “Who Can I Trust” (b/w “Tomorrow Never Comes“), both Hawthorn originals. As they preceded with sessions for a full album, Harrison cleared out for drummer Nick Gabb. 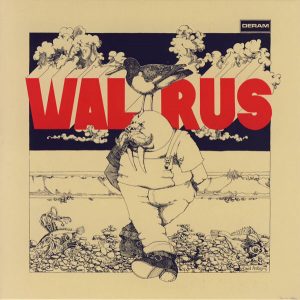 Walrus released their self-titled album in December 1970 on Deram (UK, Germany, Japan). Both sides of the earlier single bookend the album, which also contains two additional standalone songs (“Why,” “Sunshine Needs Me“) and three multi-movement suites, including “Rags and Old Iron”/”Blind Man”/”Roadside” and “Turning”/”Woman”/”Turning (reprise).”

Walrus is one of six albums produced in 1970 Hitchcock, who also handled Decca/Deram titles by Aardvark, Black Cat Bones, East of Eden, Jan Dukes de Grey, and Satisfaction. The album was engineered by John Punter, who concurrently worked on albums by Caravan, Hunter Muskett, Savoy Brown, and Trapeze.

The cover sports a sketch of an anthropomorphic male walrus. He’s dressed in boots and overalls and has a bird perched on his head. Most copies sport a key lime hew with red letters. The design and illustration are credited to Decca visual artist David Anstey, who also did covers for the Moody Blues, Martha Veléz, World of Oz, and the two Galliard albums, Strange Pleasure and New Dawn. His work on Walrus most resembles his illustration on Swaddling Songs, the 1972 singular album by Irish folksters Mellow Candle.

In early 1971, Decca issued a 7″ of “Never Gonna Let My Body Touch the Ground,” an outtake from the Walrus sessions (b/w “Why”). The song appears on the BBC Transcription Services promo comp Pick of the Pops for Your D.J.-331 with cuts by Osibisa and Ashton, Gardner & Dyke.

Walrus built a live following on the back of their album and toured into the early weeks of 1972. In this final period, Gabb made way for 18-year-old drummer Ian Mosley.

Hawthorn wrote both sides of the 1973 single “Old Sunshine, He’s a Friend of Mine” / “Growing Pains,” released on Avalanche by Cochise vocalist John Gilbert.

Parfitt worked with bassist Nick Simper (Deep Purple, Warhorse) in Blagards & Cowboys, recordings of which surfaced on the 2010 comp Skulduggery.

Mosley joined Darryl Way’s Wolf and played on their three 1973/74 albums. He subsequently played on albums by Trace, Adrian Snell, and Gordon Giltrap. After appearances on early ’80s titles by Sally Oldfield, Steve Hackett (Highly Strung), and Renaissance (Time-Line), he joined Marillion for the long haul, starting with their 1984 second album Fugazi.

Walrus got its first CD reissue in 1995 on South Korea’s Si-Wan Records. In 2008, Esoteric Recordings reissued the album with the 1971 a-side as a bonus track.

Chico Magnetic Band
The Chico Magnetic Band was a French psych-rock band from Lyon that released a self-titled album on ...
Aretha Franklin
Aretha Franklin (March 25, 1942 — Aug. 16, 2018) was an American soul singer from Memphis. Sh...
The Buggles
The Buggles were a studio-based English new wave/art pop duo that scored a global hit in 1979 with "...
The Herd
The Herd were an English beat group from London that issued three singles on Parlophone circa 1965...
Wayne Shorter
Wayne Shorter (born Aug. 25, 1933) is an American saxophonist from Newark, N.J., who co-led the ja...