Melvin “Wah Wah” Watson — aka Melvin Ragin (1950 — Oct. 24, 2018) — was an American guitarist noted for his session work on numerous jazz-funk and soul albums from the 1970s and 1980s. Deriving his stagename from the wah-wah pedal, he released the album Elementary on Columbia in 1976.

A Detroit local, Ragin first emerged in Motown house band the Funk Brothers, with whom his budding licks were laid for the likes of the Four Tops, the Jackson 5, The Supremes, and the Undisputed Truth. An iconic example of his eventual namesake sound is heard on The Temptation‘s 1972 classic “Papa Was a Rollin’ Stone.”

By the mid-1970s, the rechristened Watson was backing an array of vocal and instrumental talent, with everyone from Eddie Kendricks and Etta James to Bohannon and Johnny Hammond employing Wah Wah’s distinct, six-string tones. A gig with Herbie Hancock precipitated a one-off deal with Columbia Records — a liaison that bore fruit in 1976’s Elementary LP. 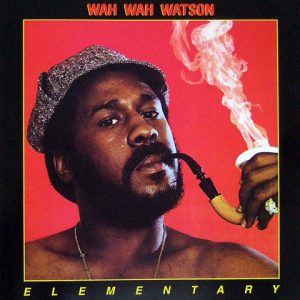 The night is spent alone on the paradoxically multi-voiced “I’ll Get by Without You,” on which the velvety licks of bassist Henry David meld with David Grusin’s wall-of-Rhodes. Bubbling keys and fizzy strings embellish the slow, sensual, dreamy soundscape, in which Watson bids adiós to a former flame with support from the ladies of The Waters.

The uptempo “Together (Whatever)” juxtaposes vocal optimism against the mournful minor modes of G and C. As minutes pass, fuzz lines and sax spiral like confetti around the track’s prominent, centrifugal rhythmic figure.

The deep syncopation of “Cry Baby” opens crater-sized grooves for Watson to fill with ample talk-box play and assorted gadgetry — sounds that he also carries to their furthest reaches on the thematic “Goo Goo Wah Wah.”

The ever-soothing “Bubbles” allows Watson to relive his favorite spot on Hancock’s Man-Child LP — complete with that album’s woodwind player Bennie Maupin and the famed keyboardist himself — with a faithful rendition that sonically extends on the crimson-skied, oily lucidity of the original.

The Bicentennial year would also see Watson’s name on at least 15 other albums, including titles by Labelle (Chameleon), Marvin Gaye (I Want You), Rose Royce (Car Wash [OST]), and Dee Dee Bridgewater‘s self-titled second album. In 1977, the guitarist teamed with Ray Parker Jr. and other studio notables in the First Cosins Jazz Ensemble.

Rounding out the 1970s, Watson notched studio time with saxist Gary Bartz, keyboardist George Duke, drummer Harvey Mason, arranger Gene Page, and vocalists Patti LaBelle, Carolyn Crawford, Lalomie Washburn, Lenny Williams, Gloria Gaynor, and numerous others. In 1979, he helped Patrice Rushen consolidate her move from jazz-funk to soul-funk on the keyboardist/vocalist’s triumphant Pizzazz LP. Wah Wah’s characteristic licks can also be heard on the tracks “Get On the Floor,” “Girlfriend,” and a cover of Carole Bayer Sager‘s ubiquitous “It’s the Falling in Love” from Michael Jackson‘s decade-ending breakthrough Off the Wall.

The early 1980s found Watson’s name on the LP jackets of everyone from Smokey Robinson and Cheryl Lynn to Argentinian saxist Gato Barbieri and NYC pop sextet Blondie. The guitarist continued to be an R&B studio presence into the mid-2000s. He passed away in October 2018 at age 67.