U.K. was an English symphonic-rock supergroup that released a self-titled album on Polydor as a four-piece in 1978, followed by the album Danger Money under a revised trio lineup in 1979.

After the departure of Holdsworth and Bruford to the latter’s namesake jazz-rock combo, the remaining two enlisted ex-Zappa/future-Missing Persons drummer Terry Bozio.

Wetton first emerged in brass-rockers Mogul Thrash, a Colosseum spin-off that released a 1971 self-titled album on RCA Victor. He then joined Family for the 1971/72 albums Fearless and Bandstand.

In 1973, Robert Fripp summoned Wetton into a reconstituted King Crimson with Bruford. The drummer was fresh off a five-album stint with Yes that culminated in the 1972 classics Fragile and Close to the Edge. The Wetton/Bruford Crimson lineup produced the albums Larks’ Tongues in Aspic, Starless and Bible Black, and Red.

After Crimson, Bruford played on albums by Roy Harper, Pavlov’s Dog, Absolute Elsewhere, and solo albums by his former Yes bandmates Steve Howe and Chris Squire (Fish Out of Water). He did a brief stint in National Health — a jazz-rock band formed by ex-members of Hatfield and the North and Gilgamesh, including keyboardist Dave Stewart — and toured with Genesis behind their 1976 release A Trick of the Tail, their first with Phil Collins as vocalist. Meanwhile, Wetton served as a touring bassist for Roxy Music and Bryan Ferry and joined Uriah Heep for their 1975/76 albums Return to Fantasy and High and Mighty.

In late 1976, Wetton and Bruford rehearsed with another Yes alumnus, Rick Wakeman. The proposed super-trio faltered a short time later when Wakeman rejoined Yes (ousting their temporary keyboardist, Patrick Moraz). Intent on forming a project, the pair approached Fripp to no avail.

As their joint efforts stalled, Wetton played on Ferry’s 1977 release In Your Mind while Bruford cut a solo album with Stewart, Holdsworth, and bassist Jeff Berlin. They recorded Feels Good to Me with help from singer Annette Peacock and trumpeter Kenny Wheeler. It was released in January 1978 under the band moniker Bruford.

Between the recording and release of that album, Bill Bruford renewed his commitment to launch a project with Wetton. They agreed to each pick a member for their proposed four-piece. Bruford chose Holdsworth, having just worked with him on Feels Good. Wetton drafted Jobson, having interacted with him on the Roxy tours.

Holdsworth first emerged in ‘Igginbottom, a jazz-psych band that made the 1969 album ‘Igginbottom’s Wrench. In 1973, he played on the first of two albums by Tempest, formed by drummer Jon Hiseman between his time leading Colosseum and Colosseum II. During 1975/76, Holdsworth did one-album stints in Soft Machine, Gong (Gazeuse!), and Tony Williams New Lifetime.

In 1976, Holdsworth did a taped rehearsal session at New Jersey’s Van Gelder Studio that CTI issued without his consent as Velvet Darkness, his unofficial debut solo album. Just prior to Bruford, he played on Jean Luc-Ponty‘s 1977 album Enigmatic Ocean.

Jobson got his break in Curved Air, where he replaced Darryl Way for their 1973 fourth album Air Cut. Months later, Roxy Music selected him to replace Brian Eno. Jobson played on their 1973–75 albums Stranded, Country Life, and Siren. He interacted with Wetton on 1975/76 albums by Phil Manzanera (Diamond Head) and Ferry (Let’s Stick Together).

In 1977, Jobson played on Manzanera’s Listen Now and Frank Zappa‘s live double-album Zappa in New York, on which he established contact with drummer Terry Bozzio.

The lineup of Bruford, Holdsworth, Jobson, and Wetton named their act U.K. and signed to Polydor. Sessions for their debut album took place between December 1977 and January 1978. 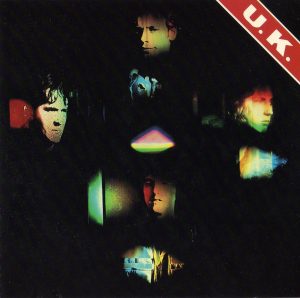 U.K. released their self-titled debut album in March 1978 on Polydor/EG. Side one contains “In the Dead of Night,” a 13-minute Jobson/Wetton epic divided into three parts: “In the Dead of Night” (the anthemic song proper), “By the Light of Day” (the eerie reverse), and “Presto Vivace and Reprise” (a frenzied instrumental break, followed by the return of the main song). The Jobson/Wetton pair also wrote two pieces with Bruford (“Thirty Years,” “Time to Kill”) and two with Holdsworth (“Nevermore,” “Mental Medication”). Jobson sole-wrote the side two opener “Alaska.”

Jobson’s arsenal here includes the Yamaha CS-80, a just-released polyphonic synthesizer that gives U.K. a more hi-tech sound than prior recordings in the symphonic-rock vein.

Sessions for U.K. commenced four months after the completion of Feels Good to Me at the same Soho studio, Trident, and wrapped just as the Bruford album hit shelves. U.K. was self-produced by the band with engineer Stephen W. Tayler, who did the same on Feels Good as well as 1978 titles by Anthony Phillips (Wise After the Event), Brand X (Masques), Charlie (Lines), and Peter Gabriel (scratch).

Tayler had three assistants, including Reno Ruocco, a technical hand on recent contemporary titles by Cafe Jacques (Round the Back) and Rush (Hemispheres). Another assistant, Steve Short, worked on concurrent albums by Genesis (And Then There Were Three), Renaissance (A Song for All Seasons), and several aforementioned titles.

On the cover of U.K., siren lights shine in the dark across each member’s face. It was designed by Nicholas De Ville, who did cover visuals for all the ’70s-era Roxy Music and Bryan Ferry albums, plus the 1974 release Kimono My House by Sparks. His other 1978 credit is Crossing the Red Sea With the Adverts, the debut album by punk rockers The Adverts. The back shows a space station view of Great Britain and the LP labels sport a blue, jagged silhouette of the island.

Polydor issued an edit of “In the Dead of Night” as a single, backed with “Mental Medication.” The picture sleeve presents the band’s name as a chrome letter sculpture with the jagged island silhouette split between the U and the K. The a-side appears on Investigacion De Mercado 1, a 1978 Spanish Polydor promo comp with cuts by the Atlanta Rhythm Section, Barclay James Harvest, Charlie, the Marshall Tucker Band, Rainbow, and Walter Egan.

U.K. toured the album into the latter part of 1978. During the North American leg of their tour, the band split into two factions. Bruford and Holdsworth wanted to steer the band toward jazz-rock, as hinted by two post-album Bruford compositions (“Forever Until Sunday,” “Sahara of Snow”) recently introduced to their live set. Jobson and Wetton favored the classic symphonic-rock style. Weary of Holdsworth’s improvisational playing, they fired the guitarist that fall.

Bruford left with Holdsworth and the pair called back the Feels Good lineup for a second round of activity under the band name Bruford. Their 1979 release, One of a Kind, features studio recordings of Bill’s two compositions intended for U.K. “Forever Until Sunday” features Jobson on violin.

For the second U.K. album, Jobson roped in Bozzio, who recently backed the Brecker Brothers amid his ongoing Zappa commitments. 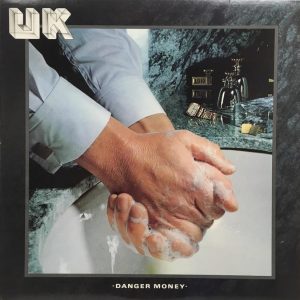 U.K.’s second album, Danger Money, appeared in March 1979 on EG/Polydor. The album contains six Jobson/Wetton compositions, three of which — “The Only Thing She Needs,” “Caesar’s Palace Blues,” and the 12-minute “Carrying No Cross” — were introduced live in prototype form by the original lineup. The title track evolved from a chord sequence initially placed at the intro of “Cross.” Wetton conceived “Nothing to Lose,” a chorus-dominant melodic rocker with two verses rearranged by Jobson, who did a unison oscillator trick during the CS80 solo on “Rendezvous 6:02.”

Jobson and Wetton produced Danger Money at AIR Studios, London, between November 1978 and January 1979 with engineer John Punter, who also worked on contemporary albums by Gloria Mundi, Japan (Quiet Life), Judie Tzuke (Welcome to the Cruise), and Sad Cafe. Punter’s assistant, Nigel Walker, worked on recent albums by Chris De Burgh, Kate Bush, and the debut album by The Cars. Beatles engineer Geoff Emerick, who recently worked with Split Enz (Dizrythmia) and Supertramp (Even in the Quietest Moments…), is credited here as the backing-track recorder.

Hipgnosis designed the Danger Money cover, an act of hand-washing that references the hit man protagonist of the title track. The back features bleak b&w middle-shots of the three members, reflecting the mood of the lyrics. The labels and inner-sleeve show space station images of an overcast Earth.

Polydor issued “Nothing to Lose” and “Rendezvous 6:02” as a-sides in select territories, each backed with the edit of “In the Dead of Night.”

U.K. toured Japan in the spring of 1979, followed by late summer US dates supporting Jethro Tull. That September, EG issued the live album Night After Night in both territories, taken from May–June performances at Tokyo’s Nakano Sun Plaza Hall and Nippon Seinenkan. It features roughly 16 minutes of material from each of the two albums, but two unrecorded Jobson/Wetton songs, “As Long As You Want Me Here” and the title track.

An edit of “Night After Night” appeared as a single, backed with the non-album Wetton number “When Will You Realize.” Arguments over the latter track contributed to the band’s breakup.

John Wetton played on the 1979 blues-rock album I Wish You Would by Jack Knife, a Munich-based project with drummer Curt Cress and Supertramp co-founder Richard Palmer-James, the lyricist for Crimson during Wetton’s tenure. That same year, Wetton almost joined French symphonic rockers Atoll. He recorded three songs with the band, later included on CD reissues of their 1979 album Rock Puzzle, including “Here Comes the Feeling,” which he rerecorded with Asia.

In 1980, Wetton released his debut solo album Caught in the Crossfire, which contains a modified rerecording of “When Will You Realize.” He briefly joined Wishbone Ash for their 1981 album Number the Brave, which also features singer Claire Hamill. Wetton then formed Asia with guitarist Steve Howe (Yes), drummer Carl Palmer (Emerson Lake & Palmer), and keyboardist Geoff Downes (The Buggles, Yes). Their self-titled debut album became one of the biggest sellers of 1982, spurred by the FM rock hits “Heat of the Moment” and “Only Time Will Tell.”

Eddie Jobson joined Jethro Tull for their 1980 release A, originally conceived as an Ian Anderson solo album. In 1983, he almost joined the reformed Yes and appeared in the video for “Owner of the Lonely Heart,” filmed before the return of their original keyboardist Tony Kaye. That year, Jobson debuted as a solo artist with The Green Album, recorded with his backing band Zinc, featuring ex-Gentle Giant guitarist Gary Green.

In 1981, Ian Anderson asked Bozzio to join Jethro Tull for their upcoming album Broadsword and the Beast. Though tempted, Bozzio and O’Hearn had already formed Missing Persons, a New Romantic synthpop band with Zappa bassist Warren Cuccurullo and Terry’s wife, singer Dale Bozzio. They debuted with an eponymous EP on self-press KoMoS, followed by the 1982 Capitol release Spring Session M, which spawned the hits “Words,” “Destination Unknown,” and “Walking in L.A.”

Leo Sayer
Leo Sayer is an English pop singer who released 10 studio albums between 1973 and 1983. Leo was...
Martha Veléz
Martha Veléz (born August 25, 1945) is an American singer who released the blues-rock-soul albums Fi...
Amazing Rhythm Aces
The Amazing Rhythm Aces were an American rustic-rock band from Memphis that released five albums ...
Yellowstone & Voice
Yellowstone & Voice were an English chamber-pop duo that released a self-titled album on Regal...
Mirror
Mirror were a Dutch symphonic-rock quintet that self-pressed the album Daybreak in 1978. Three-fif...