Trees were an English folk-rock/psych band from London that released the album The Garden of Jane Delawney on CBS in 1970, followed by On the Shore in 1971.

In need of a singer, Costa contacted Celia Humphris, a former dance and drama student at London’s Arts Educational. Humphris, the daughter of comics artist Frank Humphris (Eagle‘s “Riders of the Range” series), was the sister of a Costa associate. The five piece, dubbed Trees, cut demos in the summer of 1969 and signed to CBS that August. Their management agency, Clearwater Productions, also handled contemporaries Cochise, High Tide, and Thunderclap Newman. 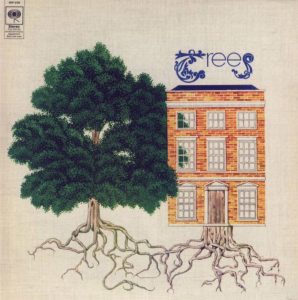 Trees released their debut album, The Garden of Jane Delawney, in April 1970. It starts with the group-written “Nothing Special” and features four Boshell originals (“Road,” “Epitaph,” “Snail’s Lament,” the title track) and four band-arranged traditionals (“The Great Silkie,” “Lady Margaret,” “Glasgerion,” “She Moved Thro’ the Fair”).

“Nothing Special” appeared on 7″ (b/w “Epitath”). It also appears on the 1970 CBS compilation In Good Company with tracks by Chicago, Laura Nyro, Argent, and It’s a Beautiful Day.

Clarke played guitar on two tracks (“Ship,” “If You’re Not Part of the Solution, You Must Be Part of the Problem“) on another 1970 CBS Cox/Gamm production, Sunrise by singer-songwriter Mick Softley. 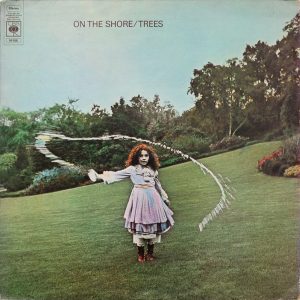 Tree’s second album, On the Shore, appeared in January 1971 on CBS. It features two Boshell originals (“Murdoch,” “While the Iron Is Hot”), a Costa co-write (“Fool”), a Cyril Tawney cover (“Sally Free and Easy”), and five band-arranged traditionals, including “Streets of Derry,” “Geordie,” “Little Sadie,” and “Polly on the Shore.”

Sessions for On the Shore occurred at Sound Techniques in October 1970, once again with Cox and Gamm. The cover shows a young Katie Meehan (daughter of early Shadows drummer Tony Meehan) amid a swirl of water, photographed by Storm Thorgerson of Hipgnosis.

“Polly on the Shore” appears on the two-LP CBS compilation Rock Buster with tracks by Blood Sweat & Tears, Miles Davis, The Flock, Santana, and Spirit. “Fool” appears on the label comp Together with cuts by Ballin’ Jack, Dreams, Soft Machine, and the Chamber Brothers.

Costa joined the second Trees lineup for a series of dates, documented on the 1989 archival release Live!

Clarke and Costa partook in the 1973 soul-rock project Casablanca with (ex-East of Eden / Manfred Mann Chapter Three) bassist Steve York and (future Blockhead) drummer Charley Charles. Their one album appeared on Elton John‘s Rocket Record Company. Clarke then played on the 1974 Epic release Steppin’ Out by Vigrass and Osborne.

Boshell played on the 1972 Sovereign release Boo by singer/songwriter Juliet Lawson. He then joined the Kiki Dee Band and wrote five songs on her 1974 release I’ve Got The Music In Me, including the hit title track. His subsequent credits include titles by Kevin Ayers, Barbara Dickson, Barclay James Harvest, Sheena Easton, Private Lives, and further albums by Dee. In 1991, he replaced Patrick Moraz as keyboardist in the Moody Blues.

Costa became an album illustrator, responsible for the cover visuals on titles by Elton John, Queen (A Night at the Opera), Stackridge, Cliff Richard (Every Face Tells a Story), The Moirs, and Electric Light Orchestra.

All About Eve covered “The Garden of Jane Delawney” as a b-side to their 1988 single “What Kind of Fool.”

Since 1993, numerous labels have reissued the two Trees albums. In 2008, UK archivists Sunbeam Records issued The Garden of Jane Delawney with a bonus EP that contains three early demo tracks, including the otherwise unavailable “Little Black Cloud” and “Pretty Polly.” A 2007 Sony BMG reissue of On the Shore contains a second disc of remixes and the 1971 rarity “Forest Fire,” recorded for the BBC.

Haircut One Hundred
Haircut One Hundred were an English New Wave/sophisti-pop band from Beckenham, Kent, that released...
The Waterboys
The Waterboys were an English folk-rock/psych band that released a self-titled album on Island/Chi...
Doug Carn
Doug Carn (born July 14, 1948) is an American jazz keyboardist from N.Y.C. who recorded four album...
Mike Oldfield
Mike Oldfield (born May 15, 1953) is an English composer, arranger, and multi-instrumentalist with a...
Jimmy Smith
Jimmy Smith — aka James Oscar Smith (Dec. 8, 1928 — Feb. 8, 2005) — was an American soul-jazz/fun...