Travis Biggs is an American composer, producer, and multi-instrumentalist whose services were widely employed on the jazz-funk and soul circuits throughout the 1970s and early 1980s. Under his own name, he released two albums during the late 1970s.

Spreading his talents over sides by John Kasandra and Bohannon, among others, Biggs adopted the little-used nickname “Hyena.” With an array of sundry instruments at his fingertips, he secured a deal with TB & C Enterprises in 1976 and assembled a sizable studio ensemble — including his brass/woodwind-playing brother Rayse — to record Challenges. 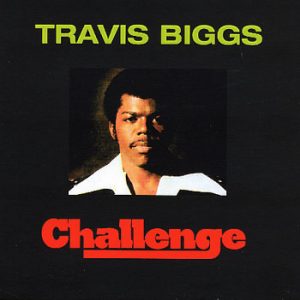 Across the first side, renditions of the ever-familiar “I Wish” and “Fly Like an Eagle” are separated by the soaring “Autumn Jewel,” which flies with ARP aglow from the cloudy highs of Dmaj7 to the horizon spans of Cmaj7 and Fmaj7. Picking up his violin, Travis bows across the slip/slide rhythmic circularity of “Solar Funk” and slings relentlessly through the mole-maze grooves of “Stone Country.” Turning to his harp for “Tibetan Serenity,” the multi-instrumentalist plucks and strums over a downbeat minimalist backdrop laced with brotherly woodwind incense. 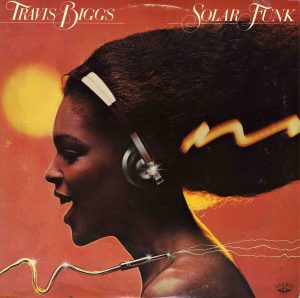 Retaining most of his backing players, Biggs jumped ship for Source Records, which issued Solar Funk in 1979 with a mix of new and repeat thrills.

With the brothers interlocked on flugelhorn and violin atop the slick, speedy hit-hat of Jerome Spearman, “Nashville Express” blows and fiddles along with steam-powered gusto. Though the albums is mostly wordless, Jeanette McGruder and fellow vocalists announce select titles at timed intervals with sheer exuberance.

Amidst the rhythmic rattle and thump of “It’s Live,” bassist Don Mayberry scales up the octave of D-sharp as brother Rayse and saxist Vincent Bowens wiggle around the low and mid ranges. As the tune advances, our bandleader lays it on thick and foamy with turns at his synthesizer, organ, and clavinet.

Of the revisited highlights from Challenges, “Tibetan Serenity” and “Solar Funk” benefit from elongated playing times — the latter by more than three minutes — and cleaner production, albeit with frequent cooing on the now title-track. By contrast, “Autumn Jewel” is trimmed by over a minute, yet remains a standard-bearer of its kind.

Between albums, Biggs conducted sides for soulster Emanuel Taylor, played strings on Michael Henderson‘s Solid LP, and joined Herman Kelly & Life — a studio project that issued the danceable 1978 longplayer Percussion Explosion! Rounding out his career as the new decade dawned, the multi-talent lent his keyboard skills to Isaac Hayes and Linda Clifford and played assorted instruments on the 1981 sophomore effort by the S.O.S. Band.