Trader Horne were an English/Irish folk-psych duo that released a standalone single and the album Morning Way, both on Pye-subsidiary Dawn in 1970. The duo comprised ex-Fairport Convention vocalist Judy Dyble and former Them/Belfast Gypsies multi-instrumentalist Jackie McAuley, who issued a self-titled solo album the following year.

Trader Horne came together through a grapevine of musicians in Notting Hill Gate, where Judy Dyble (b. Feb. 13, 1949: London) was introduced to Jackie McAuley (b. Dec. 14, 1946: Londonderry). Dyble sang on the eponymous 1968 debut album by Fairport Convention. She briefly joined Giles Giles and Fripp along with her then-boyfriend Ian McDonald. The couple soon broke up and she left the band, which retained McDonald and morphed into King Crimson.

McAuley hailed from Them, where he drummed and played piano alongside an up-and-coming Van Morrison and pre-Camel Peter Bardens. 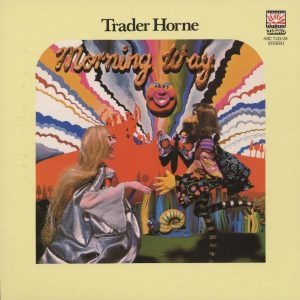 Trader Horne took their name from two sources: Horne was the surname of John Peel’s nanny, Florence. “Trader” was added as a play on tradesman Trader Horn. The duo released their singular album, Morning Way, on Dawn in March 1970. It was produced by Barry Murray (Blonde On Blonde, Titus Groan, Demon Fuzz, Mungo Jerry) with flute and clarinet on select tracks by Ray Elliott. Ten of the album’s 13 songs were written by McAuley, including “The Mixed Up Kind,” “Growing Man,” “The Mutant,” “Sheena,” and “Children of Oare.” Dyble contributed “Velvet to Atone” and the title-track. The traditional “Down and Out Blues” is the one non-original.

Weeks later, Trader Horne released the non-album 7″ “Here Comes the Rain” (b/w “Goodbye Mercy Kelly”). They shared billing with the likes of Humble Pie, Yes, and Genesis. That May, however, Dyble quit just before the pair was slated to headline the Hollywood Music Festival in Newcastle. McAuley enlisted Saffron Summerfield to fulfill outstanding commitments. Trader Horne ended in late 1970.

McAuley issued a self-titled solo album on Dawn in 1971. He later played on albums by Jim Capaldi and Rick Wakeman. Dyble reemerged from musical retirement in the 2000s. Summerfield released two folk albums on Mother Earth Records during the mid-1970s.