Tonton Macoute was an English jazz-rock/psych band from Newbury, Berkshire, that released a self-titled album on RCA-subsidiary Neon in 1971, followed by a standalone single under the abbreviated name Tonton in 1972. Keyboardist/vocalist Paul French reemerged at decade’s end with art-rockers Voyager, which issued three albums between 1979 and 1981.

Tonton Macoute had its roots in The Dick Scott Company, formed in 1966 by guitarist/singer Dick Scott, a one-time backing player for Screaming Lord Sutch. Through an ad in Melody Maker, he recruited keyboardist Paul French, bassist Chris Gavin, reedist Dave Knowles, and drummer Nigel Reveler. For the next two years, DSC gigged steadily in Germany.

In 1969, they signed a management deal with the songwriting team of Ken Howard and Alan Blaikley, responsible for hits by Lulu, The Herd, The Honeycombs, and Dave Dee, Dozy, Beaky, Mick & Tich. The pair had just ventured into psychedelia with the 1969 concept album Ark 2, recorded by soul-psych rockers Flaming Youth (featuring a young Phil Collins).

Howard and Blaikley changed the name of Scott’s band to Windmill and produced their three 1969/70 singles on MCA/Decca: “Big Bertha” (b/w “Hey, Drummer Man“), “Such Sweet Sorrow” (b/w “I Can Fly,” recorded earlier by The Herd), and “Wilbur’s Thing” (b/w “Two’s Company, Three’s a Crowd”). In partnership with songwriter Barry Mason, the pair composed all but the second a-side (Saint-Preux) and last b-side, a Scott/Reveler original. “Big Bertha,” with its fuzzy organ, snaky flute, booming drums, gritty vocals, and complex harmonies, demonstrates their soul-psych penchant across its stop/start structure. The song hit #1 on the Belgian singles chart.

Scott left Windmill and toured as a solo act in Germany, where he was killed in a roadside accident in 1970. The other members regrouped in England, where they adopted a new style and name, Tonton Macoute, taken from the Haitian folkloric character who abducted and banished children who roamed the streets after dark. They signed to RCA, which placed them in a group of bands (Spring, Dando Shaft, Raw Material, Indian Summer) issued on the label’s short-lived underground division, Neon. 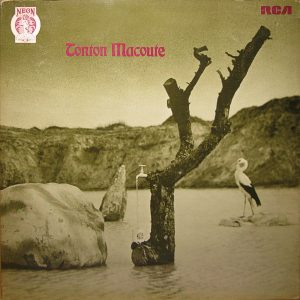 Tonton Macoute appeared in 1971 in a gatefold sleeve and Neon’s trademark mascot image (Botticelli’s Birth of Venus) on the label of side 1. The album features seven numbers, including two apiece by Knowles (“Dreams,” “You Make My Jelly Roll”) and French (“Natural High Part I” and “Part II,” counted as two separate songs). Side one contains three group-composed pieces: “Just Like Stone,” “Don’t Make Me Cry,” and “Flying South in Winter.”

The self-produced effort was recorded at Advision Studios and engineered by Martin Rushent. Along with titles by Stone the Crows, Fleetwood Mac, and Osibisa, this was near the start of a long career for Rushent, who would later work on classics by Gentle Giant (Octopus), Groundhogs (Hogwash), Premiata Forneria Marconi (L’Isola di Niente), Roderick Falconer (New Nation), David Essex (Out on the Street), Trickster (Trickster), The Stranglers (Rattus Norvegicus), Buzzcocks (Another Music in a Different Kitchen), J.J. Burnel (Euroman Cometh), Visage (Visage), and The Human League (Dare).

Across its gatefold cover, Tonton Macoute shows a sepia-tinged lake populated with jutting rocks facing a faucet-tapped dendroid (front) and a carriage atop an iceberg (back). The innerfold shows the members spread about a car heap. The imagery was photographed and illustrated by Keef (aka Keith MacMillan) in a style similar to his other covers from the period, as seen on titles by Rod Stewart (An Old Raincoat Won’t Ever Let You Down), Colosseum (Valentyne Suite), Affinity (Affinity), and Beggars Opera (Act One).

In 1972, the band halved its name to Tonton for the RCA standalone single “Summer of Our Love” (b/w “Greyhound Lady”), orchestrated by Junior Campbell (Marmalade, Miller Anderson). It sees the band divided into two songwriting pairs: Knowles/French (side A) and Gavin/Reveler (side B). Afterwards, French folded the band to become a teacher.

French remained sporadically active during the next half-decade, issuing the 1973 single “Slow Foxtrots” on Northern Dance Services ‎and two 1974 singles (“Life Is Grand” and “Love Letter Blues”) on CBS (UK). Around this time, he composed for ATV Music. In 1977, he formed the Paul French Connection for the Arista single “Halfway Hotel.” That band morphed into melodic-rockers Voyager, which issued three albums between 1979 and 1981. He’s issued solo material at a slowed pace in the decades since. Reveler co-produced a 1990 field recording by Humpback Whale.

Tonton Macoute was first reissued in 1992 by German archivists Witch & Warlock. It has since been reissued multiple times by Repertoire, Akarma, and Air Mail Archive.

(Tonton Macoute is not to be confused with the 1970 album Ton-Ton Macoute! by American blues guitarist and former Otis Redding-sideman Johnny Jenkins, released on ATCO/Capricorn with backing by members of the Allman Brothers.)

The Idle Race
The Idle Race was an English pop-psych band from Birmingham, best known for the 1967 single "Imposte...
The Whatnauts
The Whatnauts were an American soul group from Baltimore. Members: Billy Herndon, Garrett Jones,...
Sir Lord Baltimore
Sir Lord Baltimore were an American hard-rock/psych band from Brooklyn that released two albums on...
Detective
Detective was an English-American hard-rock band that released the 1977 albums Detective and It Ta...
Greenslade
Greenslade was an English symphonic-rock supergroup comprised of ex-members of Colosseum, Fields, ...