Tomorrow was an English psych-rock band that released two singles on Parlophone in 1967, belatedly followed by a self-titled album in 1968. Guitarist Steve Howe attained virtuoso status in the ’70s lineup of Yes. Drummer Twink later co-founded the Pink Fairies.

Hopkins hailed from R&B/beatsters Four + One, which issued the 1964 Parlophone single “Time Is on My Side” (b/w “Don’t Lie to Me”). Earlier, he played bass in the skiffle group The Teenbeats with singer Tony Colton (later Heads Hands & Feet) and guitarist Ken Burgess. He adopted the stagename West, but used his legal surname on songwriting credits. West and Burgess would later co-write most of Tomorrow’s material.

Howe first recorded in The Syndicats, which issued three Columbia beat singles in 1964/65. When he jumped ship to The In Crowd, his spot was claimed by (future After Tea, Spencer Davis Group, Ian Gillan Band) guitarist Ray Fenwick, who quickly cleared out for Peter Banks. (Howe, in turn, would later replace Banks in Yes.)

Adler first drummed in The Strangers, then The Fairies, which issued one 1964 Columbia single and two in 1965 on His Master’s Voice. When he left The Fairies to join The In Crowd, he replaced original drummer Ken Lawrence.

As The In Crowd, they released three 1965 Parlophone singles: “That’s How Strong My Love Is” (b/w “Things She Says”), “Stop, Wait a Minute” (b/w “You’re on Your Own”), and “Why Must They Criticize” (b/w “I Don’t Mind”). After these singles, Lawrence cleared out for Adler.

In 1966, The In Crowd was tapped for a club scene in the British mod-action film Blowup starring David Hemmings, Vanessa Redgrave, and Sarah Miles. The band recorded two songs for the film, “Blow-Up” (with lyrics concerning the plot) and “Am I Glad to See You.” The production crew made several Gibson 175 replicas for Howe to smash during the club scene. However, the band was dropped for the Yardbirds, who perform “Stroll On” in said scene, after which Jeff Beck smashes one of the 175 replicas. (Before they contacted The In Crown, studio reps asked The Animals and The Velvet Underground to perform in that scene.)

Following the Blowup debacle, The In Crowd morphed into Tomorrow. Their debut single, “My White Bicycle” (b/w “Claramount Lake,” both Hopkins/Burgess) appeared on Parlophone in May 1967, just ahead of the British psych wave heralded by The Beatles (Sgt. Pepper) and Pink Floyd (The Piper at the Gates of Dawn). “My White Bicycle” was inspired by the Dutch Provos, an Amsterdam anarchist collective that left white bikes around town for random free access. (The song was later covered by Scottish hard-rockers Nazareth for a 1974 single.)

Tomorrow’s second single, the West/Howe “Revolution” (b/w the West/Burgess “Three Jolly Little Dwarfs”), appeared in September 1967. The a-side preceded the namesake Beatles song by a year. That month, Tomorrow performed on the first installment of DJ John Peel’s BBC Radio 1 program (9/21/67). They were tapped for a scene in the British comedy Smashing Time starring Rita Tushingham, Lynn Redgrave, and Michael York. However, they were dropped from the project in favor of Tyneside psychsters Skip Bifferty.

Just as Tomorrow gained steam, West got sidetracked with A Teenage Opera, a psychedelic rock opera devised by the band’s producer, Mark Wirtz. West co-wrote and performed the song “Excerpt From A Teenage Opera,” a UK #2 hit. That and the followup, “Sam,” were issued as Keith West solo singles on Parlophone, but the proposed album was vaulted until 1996. 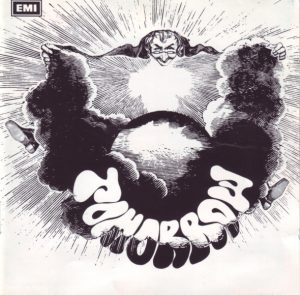 Tomorrow’s belated self-titled album appeared on Parlophone in February 1968. It features three of their prior single sides (minus “Claramount Lake”), and eight other tracks, including the West/Burgess originals “Colonel Brown,” “Shy Boy,” “Auntie Mary’s Dress Shop,” and “Hallucinations.” Tomorrow also features three songs credited solely to West (“Real Life Permanent Dream,” “The Incredible Journey of Timothy Chase,” “Now Your Time Has Come”) and a cover of the Beatles’ “Strawberry Fields Forever.” The album was produced by Wirtz and co-engineered by Geoff Emerick and Peter Bown. Artist Mike Sedgewick designed the psychedelic cover art.

In July 1968, West released a third solo single, “On a Saturday” (b/w “The Kid Was a Killer”), two originals with backing by Howe, bassist Ron Wood (then involved in The Creation), and drummer Aynsley Dunbar.

With Tomorrow disbanded, Wirtz produced Adler and Wood in the pop-psych studio project The Aquarian Age. They created one 1968 single on Parlophone: the shimmery/cello-laden “10,000 Words In a Cardboard Box” (b/w the acting dialogue “Good Wizard Meets Naughty Wizard”).

Adler joined The Pretty Things just in time to help them complete their 1968 rock opera S.F. Sorrow. He also partook in their masquerade recordings as The Electric Banana for the DeWolfe label. In 1970, he released the solo album Think Pink as Twink. That same year, he played on the album Mona – The Carnivorous Circus by ex-Deviants singer Mick Farren. Along with the other ex-Deviants, Twink co-founded the Pink Fairies and played on their 1971 debut Never Never Land. In 1973, he played on the single “Ejection” by Captain Lockheed & The Starfighters, a Hawkwind side-project. In 1977, Adler sang on a standalone single by The Rings, an early punk band. He then issued the maxi-single Do It ’77 in 1978 on Chiswick Records.

Howe followed Tomorrow with Bodast, which recorded an album that got shelved when their prospective label, Tetragrammaton Records, went out of business. Bassist Bruce Thomas (later Quiver, Sutherland Brothers, Elvis Costello) was briefly involved in the project. One Bodast track, “Nether Street,” includes a riff that would later form the basis of “Würm,” Howe’s contribution to the three-part epic “Starship Trooper” by Yes, included on their 1971 release The Yes Album, Howe’s debut with the band. He ultimately recorded eight studio albums with Yes (up through 1980) and courted further fame as part of the ’80s supergroup Asia.