Timeless Legend were an American soul group from Columbus, Ohio, that released sporadic singles on the small-press labels of manager/producer Carl Fagain. Their one album, Synchronized, appeared on lone-press Pendulum Records in 1976.

Timeless Legend were discovered by Carl Fagain, who first recorded the band for his Black Forest label in partnership with Eddy Parker. In 1975, the group made its vinyl debut with “(Baby) Don’t Do This to Me” (b/w “Where There’s Love There’s a Way”). Both sides were written by ex-Four Mints drummer/future Sun vocalist Dean Francis. It was one of two records issued on Black Forest; the other was “Brother, Wake Up” / “Junkie Hustle” by Earth’s Delight (also 1975). 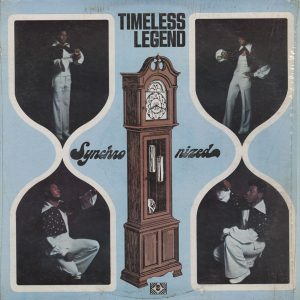 After a few years of silence, Timeless Legend issued the 1979/80 singles “Everybody Disco” and “I Was Born to Love You” on Fagain’s Dawn-Lite label. Both songs were written by Hogg. The group (along with the Pendulum imprint) returned once more for the 1985 single “Do You Love Me” (b/w “You’re the One”).

Synchronized has been thrice reissued in the 21st century with five bonus tracks taken from the group’s singles.