Ticket was a New Zealander post-psych band that released the albums Awake and Let Sleeping Dogs Lie on small-press Down Under Records in 1972.

Hansen cut his teeth in Christchurch blues-rockers The Revival. His older brother, Peter Hansen, was the bassist in ’60s garage rockers Chants R&B. Ball hailed from beatsters The Challenge, which scored a national hit in 1969 with “Honey Do” (NZ #2). Woolright came from soul covers band The Entry.

Inspired by Jimi Hendrix and The Electric Flag, they hired singer Trevor Tombleson, formerly of the Jamestown Union. Trevor’s band performed once on the NZ music television program C’Mon and served as the local opening act for Eric Burdon and the Animals.

On the brink of their first live dates, the new four-piece named itself Ticket. They gained instant notoriety when south island club promoter Trevor Spitz billed them with the tagline “HAIR HAS COME TO CHRISTCHURCH,” thus conflated the band with the controversial national debut of the hippy musical Hair. Their early live set consisted of lengthy jam numbers.

In August 1971, Ticket flew to Wellington and cut their first single, “Country High” (b/w “Highway of Love”), both band-written originals. It was released by the Ode Recording Co. 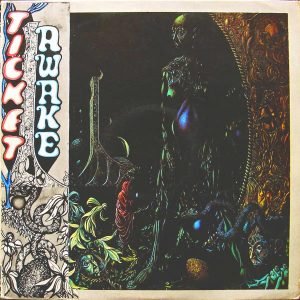 Ticket signed a management deal with promoters Barry Coburn and Robert Raymond, owners of Down Under Records Ltd. Their debut album, Awake, appeared on said label in 1972. It was self-produced by the band at Wakefield Street Studios and engineered by Frank Douglas.

Awake consists of seven group-composed originals, including the two single sides plus “Dream Chant,” “Highway of Love,” “Reign Away,” “Broken Wings,” and the title-track. It features a post-psychedelic cover illustration credited to one Jo Hardy of Mystic Garbage Truck. The back cover features a fish-eye band photo taken by Vince Vendetti of World Wide Vibes. To the bottom left is a hippy couple beside the dedication “To John + Diana.” Both “Dream Chant” and “Awake” appeared as 7″ a-sides. 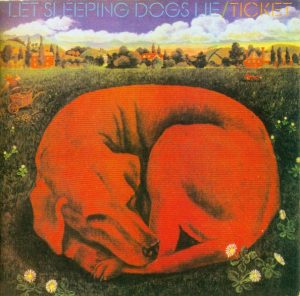 In March 1972, Ticket made their first rounds in Australia. That May, they entered Melbourne’s T.C.S. Studios and recorded their second album, Let Sleeping Dogs Lie, engineered by John French (Coloured Balls, Madder Lake, Sherbet, Skyhooks). The cover depicts a red Labrador Retriever asleep in a bagel position. It was illustrated by Dick Frizzell, who also did covers for The Human Instinct, Serenity, and Dragon (Universal Radio).

Let Sleeping Dogs Lie features eight band-written originals, including “People Going Nowhere,” “On This Planet,” “Gipsy Rover,” and “The Bad Things in the World Make the Nicer Things Nicer.” The title-track was issued as a single.

In January 1973, Ticket played the Great Ngaruawahia Festival, a three-day event on the Waikato River outside Hamilton. It would be their last show before Hansen and Tombleson left for spiritual pursuits. The band’s final single, “Mr. Music” (b/w the Buddy Miles cover “Them Changes”), appeared that year on the Vertigo swirl label, courtesy of Phonogram Ltd. Wellington. Hansen and Tombleson briefly reformed the band in 1974 with ex-Space Farm bassist Billy Williams, but no recordings came from this lineup.

Hansen, Woolright, and Ricky Ball backed singer/songwriter Lindsay Marks on his 1973 self-titled album on Vertigo. In 1977, Hansen formed the Latin-rock band Living Force, which issued a self-titled album on Atlantic. Ball surfaced in pub-rockers Hello Sailor, one of New Zealand’s most popular acts during 1977/78 with two albums on Key. Woolright reappeared in 1980 with new wavers Dave McArtney & The Pink Flamingos.

Tombleson went to the UK, where he briefly fronted the Keef Hartley Band.

Awake was first reissued on CD by Rock In Psych Records (Germany, 2000) with one bonus track, “Over the Ocean.” A decade later, it was reissued on Aztec Music (Australia) without the earlier bonus but with four added tracks: the 1973 single plus “Stoned Condition” and “Then You’ll Fly.” In 2011, Let Sleeping Dogs Lie got a CD reissue on Down Under with three bonus live tracks from a 2009 reunion concert.

Ticket ‎– Awake (1972)
Awake is the first of two back-to-back albums by Kiwi psych-rock/jam band Ticket, released in 1972 o...
Pacific Eardrum
Pacific Eardrum were a multi-national jazz-funk/soul band that released two albums on Charisma in 19...
Mi-Sex
Mi-Sex were a New Zealander New Wave/modern-rock combo that released four albums on CBS/Epic between...
Spring ‎– Spring (1971)
Spring is the singular album by the English symphonic-rock quintet of the same name, released in 197...
Spring
Spring was an English symphonic-rock band that released a self-titled album on RCA/Neon in 1971. It ...