Three Man Army was an English hard-rock trio that released the album A Third of a Lifetime on Pegasus in 1971, followed by two self-titled albums on Reprise. They featured guitarist/vocalist Adrian Gurvitz and his bassist brother Paul Gurvitz, the team behind ’60s psych-rockers Gun.

The trio first included drummer Mike Kellie (Spooky Tooth, The Only Ones), replaced after one album by Tony Newman, formerly of May Blitz. After three albums, Newman cleared out for ex-Cream drummer Ginger Baker. This prompted a name-change to Baker Gurvitz Army, which issued three albums on Atco/Vertigo between 1974 and 1976.

Three years earlier, the brothers burst onto the scene in the power-trio Gun, which charted with “Race With the Devil” and issued the 1968/69 albums Gun and Gun Sight. In the interim, Adrian toured with ex-Band of Gypsys drummer Buddy Miles while Paul formed the duo Parrish & Gurvitz with guitarist/singer Brian Parrish, who’d partnered earlier with Paul in the pre-Gun beat group The Knack.

Parrish & Gurvitz issued one album in early 1971 and recorded a vaulted second, both with drummer Mike Kellie, then on furlough from Spooky Tooth. Kellie completed the initial Three Man Army lineup. (Essentially, Three Man Army was Parrish & Gurvitz with Adrian in lieu of Brian or, more accurately, a reformed Gun with Kellie in place of drummer Louie Farrell). 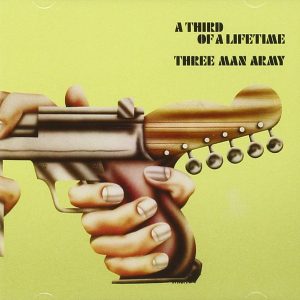 A Third of a Lifetime features 10 Adrian originals, including “What’s My Name,” “Another Way,” and “Together.” Buddy Miles plays bass on “Nice One,” organ on “Midnight,” and drums on the opening track “Butter Queen,” co-written by bassist Keith Ellis (Koobas, Van der Graaf Generator, Juicy Lucy). The title-track features strings arranged by Wil Malone (ex-Orange Bicycle), who later did orchestration for the Intergalactic Touring Band.

A Third of a Lifetime was produced by Lou Reizner, who co-wrote the track “Daze.” As on the two Gun albums, the Gurvitz brothers are listed on this and subsequent TMA releases by their alternate surname Curtis. Original copies are housed in a gatefold with photos of the three members on the inner-spread. The outer-fold shows three silver-manicured hands wrapped around a gun/guitar hybrid device, designed by painter/illustrator Terry Pastor, who also did cover visuals for David Bowie (Hunky Dory, Ziggy Stardust), Soft Machine (Six), Sweet (Off the Record), and Byzantium (Byzantium). 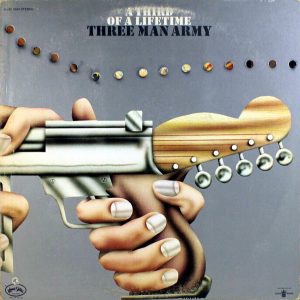 Stateside, the album was issued on Kama Sutra in an altered cover riddled with bullet holes. In the UK, Pegasus issued an accompanying single: “What’s Your Name?” (an alternate version of the album track “What’s My Name”), backed with the non-album “Travelin’.” The a-side is co-credited to Lee Baxter Hayes Jr., who drummed on the 1972 DJM release East 17 by blues rockers Sam Apple Pie.

While involved with the Gurvitz brothers, Kellie drummed on albums by Stefan Grossman, John Simson, Steve Gibbons, and ex-Spooky Tooth bandmate Luther Grosvenor. In 1972, he exited Three Man Army to play on albums by Peter Frampton, Joe Cocker, Ritchie Francis, and Jim Capaldi. The brothers replaced him with Tony Newman, who drummed on the 1969 releases Beck-Ola by the Jeff Beck Group and Is This What You Want? by Jackie Lomax. More recently, he cut two albums with hard rockers May Blitz. 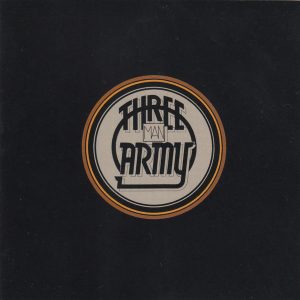 In April 1972, the trio entered Morgan Studios and recorded their second album. In the US, it was issued in 1973 on Reprise as Three Man Army. The album features nine cuts; four co-written by A. Gurvitz and Newman, including the side B bookends “Mahesha” and “Trip.” Adrian lone-composed “Come On Down to Earth,” “Take Me Down From the Mountain,” and “Can’t Leave the Summer, Pts. 1 & 2.” The track “Take a Look at the Light” is another Baxter Hayes co-write. The only non-original is the Jewish vaudeville standard “My Yiddishe Mama.” 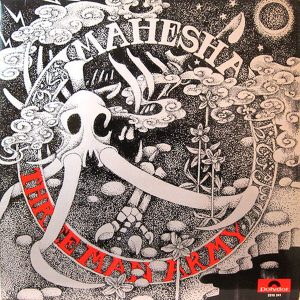 Three Man Army was co-produced between Reizner and the band and engineered by Robin Black (Jethro Tull, Steeleye Span). In Germany, the album was issued in 1974 on Polydor as Mahesha with a surreal, pointillist cover in a style reminiscent of M. C. Escher. Between the recording and release dates of Three Man Army / Mahesha, Adrian toured the US with the Buddy Miles Express and played on their 1973 album Chapter VII. 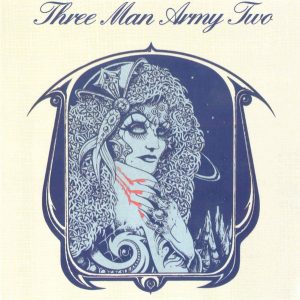 The trio’s third album, confusingly titled Three Man Army Two (perhaps excluding the pre-Newman era), appeared in 1974 on Reprise in the UK, US, France, and Australia. It features four originals per side, including three Baxter Hayes co-writes (“Polecat Woman,” “I Can’t Make the Blind See,” “In My Eyes”) and two (“Irving,” “Burning Angel”) with writing input from Newman and Paul Gurvitz. (Adrian is once again credited as Curtis while Paul is listed by their real surname.) ‘Curtis’ lone-composed the bulk of side A: “Today,” “Flying,” and “Space Is the Place.”

The cover of Three Man Army Two depicts a star-haired, stiletto-nailed vamp in the act of shoulder-gashing. It was illustrated by American artist Joe Petagno, who also did covers for West, Bruce & Laing (Whatever Turns You On), Captain Beyond (Sufficiently Breathless), Renaissance (Turn of the Cards), Nazareth (Rampant), The Kinks (Soap Opera), and Man (The Welsh Connection). Petango continued his Gurvitz association on albums by Baker Gurvitz Army and the Graeme Edge Band. 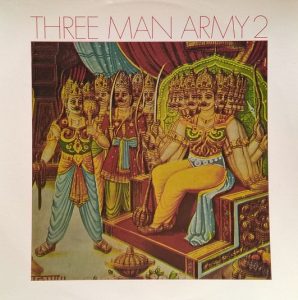 In Australia and France, the album appeared as Three Man Army 2 with an alternate cover: a white-framed, 3-D image of Ravana, the multi-headed demon king.

Reprise issued “Polecat Woman” on 7″, backed with the prior album’s “Take Me Down From the Mountain.” In Portugal, “Polecat” appeared on Warner with the otherwise unavailable b-side “Schoolgirl Queen.” 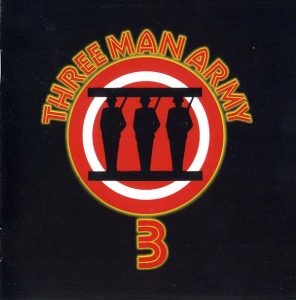 During 1973/74, the Gurvitz brothers demoed cuts for a rock opera under the working title Three Days to Go. Three decades later, Paul rediscovered the tapes. In 2004, German archivists Revisited Rec. issued the lost Three Man Album album as 3. It features nine songs, including the Malone-orchestrated “Look at the Sun.” Through attributed to the Reprise-era trio, the CD liner notes identify Baxter Hayes as the drummer on “Jubilee.”