Third World War was an English rock band that released two albums between 1971 and 1973 on Fly and Track. Along with the Groundhogs, Pink Fairies, and the Edgar Broughton Band, they gave blues rock a fractious twist that presaged punk.

Avery’s prior stints included psych-rockers The Attack and a 1969 touring gig with Thunderclap Newman. At the invitation of producer Denny Cordell (The Moody Blues, Procol Harum), he joined the Writers Workshop label, where he played on demos with John Renbourn and a young Rick Wakeman.

Stamp served as the bassist behind bandleader Mike Rabin (The Demons, His Music) on a pair of 1964/65 beat singles. In 1968, Stamp wrote songs recorded by psych-rockers Harsh Reality (“Tobacco Ash Sunday”) and folksters Foggy Dew-O (“All the Best Songs and Marches”). Harsh Reality used a second Stamp composition (“Heaven and Hell“) as the title-track to their 1969 album on Philips. By 1970, “All the Best Songs and Marches” had also been covered by Amory Kane and the Family Dogg. When Fenton made the call, Stamp worked as a lorry driver.

Avery and Stamp formed a writing partnership at Fenton’s flat in Brompton Road, Knightsbridge. For the first TWW recording, Fenton enlisted drummer Fred Smith (ex-Ian & The Zodiacs) and Scottish-born guitarist Mick Liber, once of Aussie surf-rockers The Denvermen. They recorded Third World War over a two-week period in September 1970 at Basing Street studio. 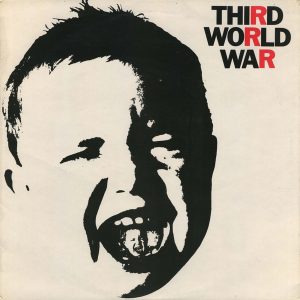 When sessions wrapped, Ashton drafted Liber into the backing band of Ashton, Gardner & Dyke. Smith departed after a residency at the Dustbin in Hanover; he later backed Brian Eno, John Cale, and Kevin Ayers. As a member of The Soporifics, he appears on their joint Island release June 1, 1974.

In April 1971, Third World War hired drummer “Funky” Paul Olsen, guitarist John Knightsbridge, and ex-Renaissance keyboardist John Hawken. On May 23, they opened for Mountain at London’s Lyceum Theatre. Their performance received a scything review by Roy Hollingworth of Melody Maker, who declared them “the worst band I have ever heard perform, ever….” In his efforts to hype the band, Fenton spun the quote to their advantage, hoping for a BBC ban (and Streisand effect) of their single “Ascension Day” (b/w “Teddy Teeth Goes Sailing”).

Third World War played a sequence of special events, including fundraisers for the UK publications Oz (their obscenity trial) and Time Out (their third anniversary). They typically attracted riotous crowds, namely at their benefit for leftist agitators the Angry Brigade. TWW gained its most loyal audience in Europe, where their album appeared on Polydor (Germany) and Regal Zonophone (France). 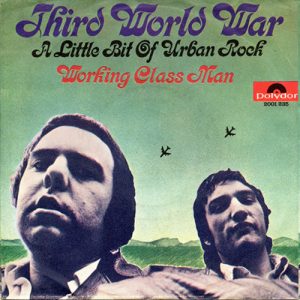 For a subsequent round of London dates, Fenton swapped Olsen with Australian drummer Craig Collinge, recently of Manfred Mann Chapter Three. (Olsen became a cover illustrator for Robin Trower.) Plans for an upcoming US tour with the Allman Brothers collapsed with the untimely death of Duane Allman that November. 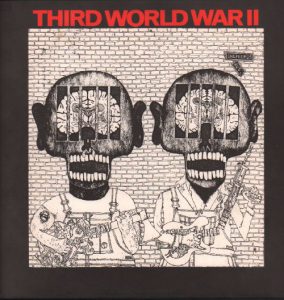 Fly Records, lured by the pop success of its flagship act T. Rex, rejected the album. Fenton publicized this as a corporate conspiracy to silence Third World War. However, with no money in the band, Hawken jumped ship to Vinegar Joe and Stamp returned to his lorry job. Knightsbridge assumed vocals on a brief tour of the continent before TWW went into a holding pattern.

Knightsbridge played on one track (“Long Road”) on the 1972 self-titled third album by Warm Dust.

In April 1973, the album finally appeared (as Third World War II) on Track Record, the label established by Who managers Kit Lambert and Chris Stamp. Track released the album at the insistence of Pete Townshend, a TWW fan. In France, the album appeared on Vertigo. To capitalize, Fenton summoned Terry Stamp to kickstart the band. After a sequence of subpar live events, the band folded for good.

Avery arranged the 1976 album Suite Sounds by Tower Suite. In 1978, he cut the Charisma single “Idle Rich” (b/w “One Room Doom”) with punk rockers Razar. After years away from music, he renewed his partnership with Stamp in the late 1990s for a string of GSL releases.

Hawken joined the Strawbs for their 1974/75 albums Hero and Heroine and Ghosts. Knightsbridge cut a 1975 album with Hug, the funk-rock namesake of ex-Manfred Mann/Chapter Three musician Mike Hugg. In 1977, Hawken and Knightsbridge reteamed in Illusion, the reformed original version of Renaissance.

In 1995, the two Third World War albums were reissued on CD by German archivists Repertoire Records. Both discs were subsequently issued on Spalax Music (Germany/France, 1997) and Dogtoire (Russia, 2010).

Third World War are now recognized as forerunners to the UK punk explosion of 1976/77. The band’s bluesy, hard rock leanings were rendered with a trebly, fractious abandon that presaged the sound of the late-’70s London club scene.

According to Fenton, he was approached at the Oxhoft Club, Amsterdam, in January 1977 by Sex Pistols singer John Lydon, who recited “Ascension Day” word-for-word. That same month, Clash frontman Joe Strummer approached Avery at the Speakeasy and cited TWW as punk’s only UK antecedent from the early 1970s.

In 2010, UK punk compilers Year Zero included “A Little Bit of Urban Rock” on the chronological proto-punk collection Dirty Water: The Birth of Punk Attitude. The song appears on disc two along with tracks by the New York Dolls, the Sensational Alex Harvey Band, Dr. Feelgood, Rocket From the Tombs, Red Krayola, The Saints, and Culture.

As a testament to the blues and R&B aspects of Third World War, “Working Class Man” makes an unlikely appearance on Heart & Soul – 28 Easy Soul Classics, a 1982 double-LP on the Dutch Arcade label. Aside from Joe Cocker, TWW are the only white and non-American act on the comp, which features soul ballads by Dionne Warwick, Minnie Riperton, Three Degrees, Billy Paul and harder-edged soul-funk by the Isley Brothers, Sly and the Family Stone, Rose Royce, and Main Ingredient.