The Police were an English New Wave/modern-rock trio that released five albums on A&M between 1978 and 1983. The band was formed by ex-Curved Air drummer Stewart Copeland in 1977, releasing its first single that summer on brother Miles Copeland’s Illegal Records label. After the arrival of veteran guitarist Andy Summers, the lineup stabilized around the classic three-piece that achieved international fame during the early 1980s with the albums Ghost in the Machine and Synchronicity. Bassist/vocalist Sting subsequently launched a successful solo career and parlayed into film roles and philanthropy.

The Police were formed in early 1977 by American drummer Stewart Copeland (b. 1952). He moved to England two years earlier and worked as a roadie for Curved Air, a post-psych band managed by his older brother Miles Copeland III, the founder of British Talent Management Ltd. Stewart joined the band for their 1975/76 albums Midnight Wire and Airborne and got engaged to frontwoman Sonja Kristina.

The Police made their live debut as the opening act for Cherry Vanilla on March 1, 1977, at Alexander’s in Newport, Wales. Two nights later, they played at the Roxy Club in Convent Garden, the epicenter of the burgeoning punk scene. 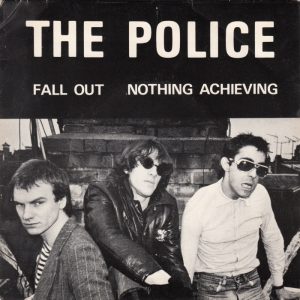 The Police released their first single, “Fall Out” (b/w “Nothing Achieving”), in May 1977 on Illegal Records, an indie founded by Miles Copeland after the collapse of BTM. It was the inaugural release on the label (IL 001), which also issued singles by The Wasps, Menace, and John Cale. The label hatched Deptford Fun City Records, which issued the EP Packet of Three, the 1977 debut release by Squeeze.

Elsewhere, Copeland augmented Metro for their standalone single “Naive” (b/w “Innocence”), released in mid-1977 as Public Zone. He declined an invitation to join Metro as he was now committed to launching The Police.

Immediately after “Fall Out,” The Police were summoned to France by erstwhile Gong bassist Mike Howlett. The two parties performed a Paris Gong reunion concert as Strontium 90 and cut several demos, including an embryonic version of the Sting composition “Every Little Thing She Does Is Magic.” These recordings were unearthed two decades later on the disc Strontium 90: Police Academy.

The Strontium gig marked the first interaction between Sting, Copeland and veteran guitarist Andy Summers (b. 1942), a longtime journeyman with roots in the beat era (Zoot Money, Dantalian’s Chariot, The Animals). In 1975, he was named as a possible replacement for Mick Taylor in The Rolling Stones.

Summers joined The Police, which briefly gigged as a four-piece before Padovani joined tour mates Wayne County & the Electric Chairs. The classic trio lineup of Sting, Copeland, and Summers made their live debut on August 18, 1977, at Rebecca’s in Birmingham. That same month, they played the second Mont de Marsan Punk Festival, which also featured sets by The Clash, The Damned, Dr. Feelgood, and Eddie & the Hot Rods. (Another slated act, The Jam, were unable to perform.) 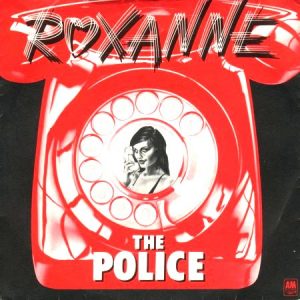 The Police singed to A&M in 1978 and issued the reggae-rocker “Roxanne” as a single that April. The song was met with resistance from programmers on first release due to its lyrical content about the narrator’s love for a prostitute. 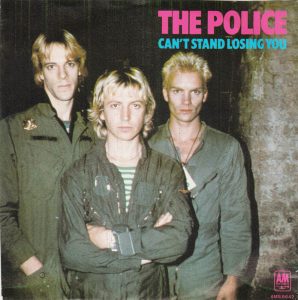 In August 1978, The Police released “Can’t Stand Losing You,” a more upbeat reggae rocker with comically grim lyrics about post-romantic despair. The b-side, “Dead End Job,” is a punked-out rant about menial labor. 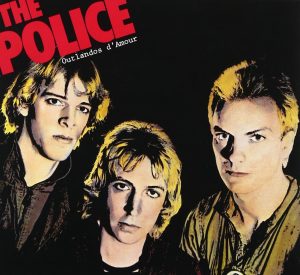 The Police released their debut album, Outlandos d’Amour, on November 2, 1978, on A&M.  It includes “Roxanne,” “Peanuts,” “Can’t Stand Losing You,” and another reggaefied track, “So Lonely.”

The album also documents the band’s early punk leanings (“Next to You,” “Peanuts,” “Truth Hits Everybody”) while previewing future sonic developments on the harmonic-tinged instrumental “Masoko Tanga”: an early showcase for Summers’ chorused guitar techniques. As on all future albums, Sting assumed the bulk of writing credits. His “Born in the ’50s” is an early example of boomer self-reflection: a theme that would dominate pop culture and journalism in the coming decade. 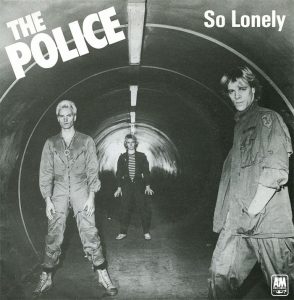 Just ahead of Outlandos, The Police lifted “So Lonely” as their fourth single, backed with “No Time This Time,” an exclusive b-side for the time being. 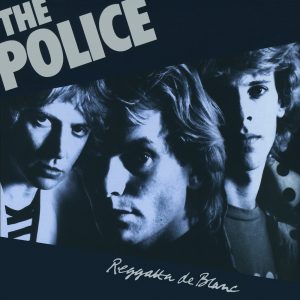 The Police released their second album, Reggatta de Blanc, on October 5, 1979, on A&M. 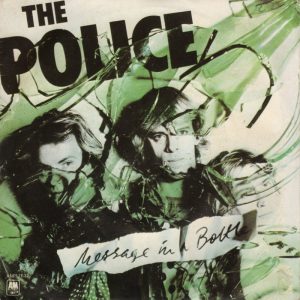 Three weeks ahead of the album, The Police issued “Message In a Bottle” as their fifth single, backed with the exclusive “Landlord.” 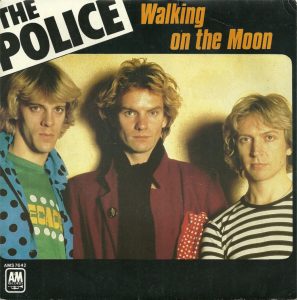 In mid-November, The Police lifted “Walking On the Moon” as their sixth single, backed with “Visions of the Night.” 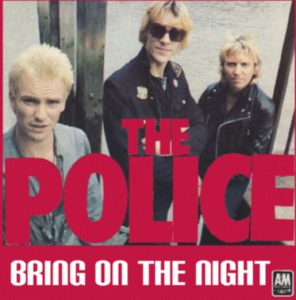 In the US, “Bring On the Night” appeared in lieu of “Walking On the Moon” as the second Reggatta a-side. 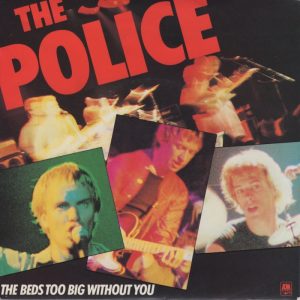 In June 1980, an alternate version of the Reggatta track “The Bed’s Too Big Without You” appeared as a single in the UK, backed with a live version of “Truth Hits Everybody.” This was included in Six Pack, a collection of the band’s 1978–79 A&M singles. 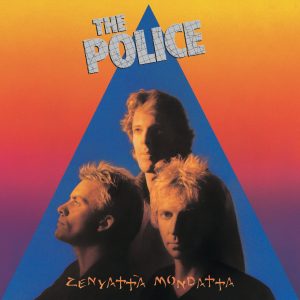 The Police released their third album, Zenyatta Mondatta, on October 3, 1980, on A&M.

A week prior to the album, “Don’t Stand So Close to Me” appeared as the first single, backed with “Friends.” 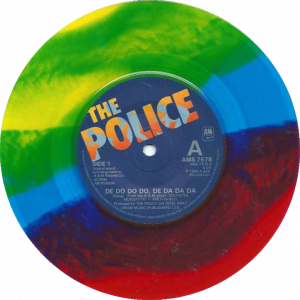 In late November, “De Do Do Do, De Da Da Da” appeared as the second UK Zenyatta a-side, backed with “A Sermon.”

Ghost in the Machine 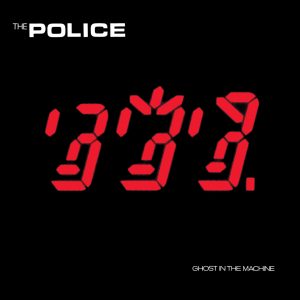 The Police released their fourth album, Ghost in the Machine, on October 2, 1981, on A&M. 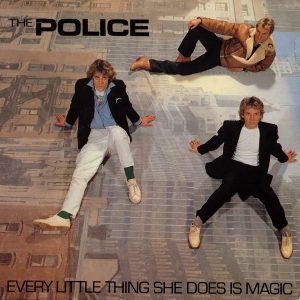 “Invisible Sun” appeared seven days ahead of Ghost in the Machine as the lead-off single in the British Isles, backed with the non-album “Shamelle.” Abroad, “Every Little Thing She Does Is Magic” was the first a-side. 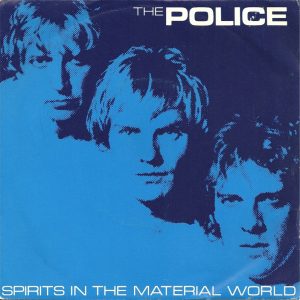 In December, The Police lifted “Spirits in the Material World” as the third UK single and second abroad; backed with “Low Life.” In the US and Canada, “Secret Journey” appeared in March 1982 as the third Ghost a-side (b/w “Darkness”). 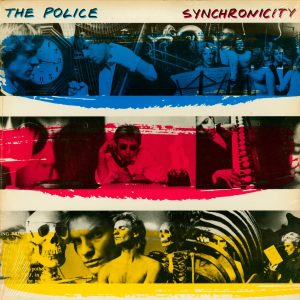 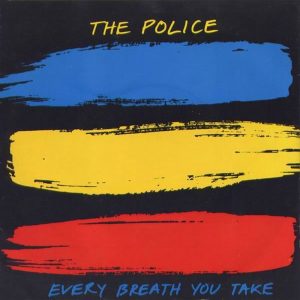 “Every Breath You Take” appeared on May 20 as the lead-off single, backed with “Murder by Numbers.” 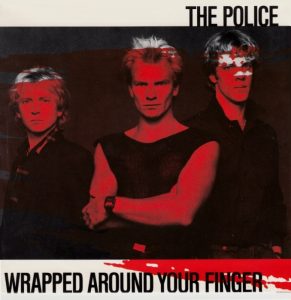 In July, The Police lifted “Wrapped Around Your Finger” as the album’s second UK single, backed with “Someone to Talk To.” 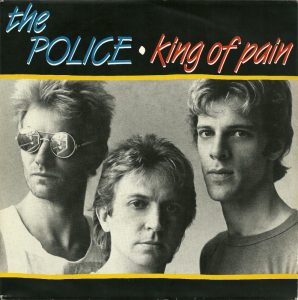 Meanwhile, “King of Pain” appeared as the second US single. 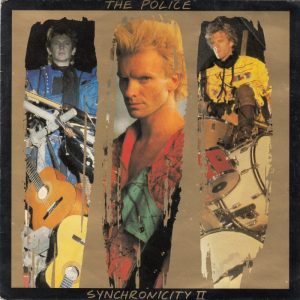 In October, “Synchronicity II” appeared as the album’s second transatlantic single (third overall), backed with “Once Upon a Daydream.” 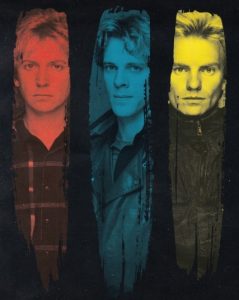 In January 1984, “Wrapped Around Your Finger” appeared as the fourth single in the US, backed with a live version of “Tea In the Sahara.”

James Mason
James Mason is an American keyboardist, guitarist, songwriter, and producer who released the album...
Samson
Samson were an English hard-rock metal band from London, formed in 1977 by namesake guitarist Paul...
Sailor
Sailor were an American rustic-rock band from Indianapolis that released a self-titled album on l...
F.B.I.
F.B.I. was a nine-piece English funk band that released a self-titled album on Tony Visconti’s Good ...
Trees
Trees were an English folk-rock/psych band from London that released the album The Garden of Jane ...