The Pale Fountains were an English sophisti-pop band that released three standalone singles and two albums on Virgin between 1982 and 1985.

Formed in 1980 Liverpool, The Pale Fountains were part of that city’s post-Deaf School musical renaissance. The band was led by singer/guitarist/songwriter Michael Head and his guitarist brother John Head, both newcomers to the scene. The rhythm section of Chris McCaffery (bass) and Thomas Whelan (drums) rounded out the lineup.

Trumpeter Andy Diagram (The Diagram Brothers, Dislocation Dance) served as the band’s fifth wheel while moonlighting with other acts.

The Pale Fountains debuted with the single “Just a Girl” (b/w “(There’s Always) Something on My Mind”) in mid-1982 on Operation Twilight/Les Disques du Crépuscule. As on all subsequent recordings, both sides were composed by Michael Head. That October, the band signed to Virgin and issued their second single, “Thank You” (b/w “Meadow of Love”). The sleeve shows the members canoeing in their trademark 1930s attire.

In 1983, the band released their third single, “Palm of My Hand” (b/w “Love’s a Beautiful Place”). It was issued in 7″ and 12″ versions, the latter containing a bonus instrumental version of the a-side. The single was produced by Greg Walsh (The Bible, Then Jerico) and Associates guitarist/keyboardist Alan Rankine. 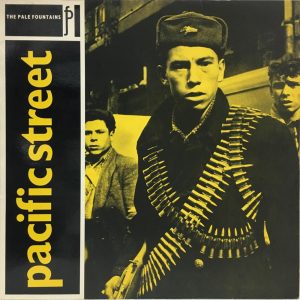 The Pale Fountains released their debut album, Pacific Street, in February 1984 on Virgin Records. It features nine proper songs, including “Southbound Excursion,” “Beyond Fridays Field,” “Abergele Next Time,” and a re-recorded “Something on My Mind.” Side two is bookended by the two-part miniature “Faithful Pillow.” 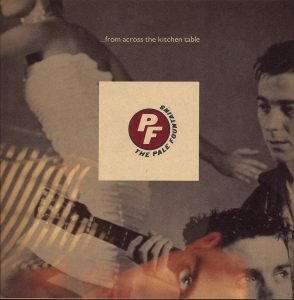 In 1985, The Pale Fountains released their second album, …From Across the Kitchen Table. It features six songs per side, including “Shelter,” “Bruised Arcade,” “Hey,” “Limit,” and “It’s Only Hard.” The title-track and “Jean’s Not Happening” were issued as singles.

The Pale Fountains disbanded in 1986 and the Head brothers returned with a new band, Shack, the following year. McCaffery died of a brain tumor in 1989.

André Demay
André Demay is a French guitarist, composer, and producer who was musically active for 10 years, s...
Noir
Noir were an English soul-psych band that released the album We Had to Let You Have It on Pye/Dawn...
Judy Roberts
Judy Roberts is an American jazz vocalist from Chicago. Discography: Judy Roberts (1979 • Th...
Fancy
Fancy were an English funk-rock band that released the album Wild Thing on WEA-subsidiary Antic in...
Romeo Void
Romeo Void were an American New Wave band from San Francisco that released the EP Never Say Never...
Roxy Music
Roxy Music was an English art-rock band led by singer Bryan Ferry. They emerged with the 1972/73 alb...
Travis Biggs
Travis Biggs is an American composer, producer, and multi-instrumentalist whose services were widely...
Imagination
Imagination were an English funk trio that released four albums on R & B Records between 1981 ...
Nash the Slash
Nash the Slash — aka Jeff Plewman (March 26, 1948 — May 2014) — was a Canadian violinist and keybo...
Ruefrex
Ruefrex were an Irish New Wave/post-punk band from Belfast, formed in 1977 and active for 10 years...
Mick Ronson
Mick Ronson (May 26, 1946 — April 29, 1993) was an English guitarist and producer from Kingston up...
First Aid
First Aid were an English symphonic-rock band that released the album Nostradamus on Decca in 1976. ...