The Masters Apprentices were an Australian rock band from Adelaide that emerged as one of the nation’s premiere beat groups. They issued five singles and one album on Astor between 1966 and 1968, including the Aussie rock classics “Undecided,” “Wars or Hands of Time,” and “Elevator Driver.” After a change in lineup, they advanced into psych and progressive hard rock on the 1970–72 Columbia albums Masterpiece, Choice Cuts, and A Toast to Panama Red.

They evolved from The Mustangs, an instrumental surf-rock band formed in 1964 by bassist Gavin Webb, drummer Brian Vaughton, and guitarists Mick Bower (rhythm) and Rick Morrison (lead). That June, The Beatles conquered Adelaide, where they were greeted in the city center by 300,000 locals (roughly half the city’s population). This prompted the Mustangs to add singer Jim Keays (b. 1946, Glasgow, Scotland) and adopt the British beat style.

At Bower’s insistence, they changed their name to The Masters Apprentices, a reference to the band’s avowed role as “apprentices to the masters of the blues.” They cut a four-track demo for Astor, including the Bower/Morrison original “Undecided,” marked by an accidental fuzz-tone caused by a faulty amp valve.

The Masters Apprentices issued their debut single, “Undecided” (b/w “Wars or Hands of Time”), in October 1966 on Astor. The b-side is one of the earliest rock songs concerning the Vietnam War, a then-pressing issue among Aussies due to the reintroduction of national service. (Keays avoided the draft by signing with the Citizens Military Force.) The single hit #13 on the Australian chart.

In February 1967, Vaughton cleared out for drummer Steve Hoppgood as the band headed for Melbourne. That May, the Masters issued their second single, “Buried and Dead” (b/w “She’s My Girl”). The following month, their self-titled debut album hit the shelves. 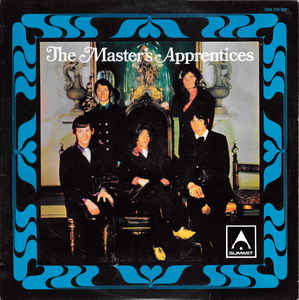 The Masters Apprentices features both sides of the first two singles and three other Bower originals (“But One Day,” “Hot Gully Wind,” “Theme for a Social Climber”) and covers of The Beatles (“I Feel Fine”), Otis Redding, Wilson Pickett, Bo Diddley, and Chuck Berry. (Later pressings append the subsequent a-sides “Elevator Driver” and “Brigette”.) The album was produced by engineer Max Pepper at his namesake Adelaide studio.

As the pressures of touring wore on the band, Morrison suffered a collapsed lung. The Masters hired guitarist Tony Summers (ex-Johnny Young’s Kompany) and returned in August 1967 with their third Astor single, “Living in a Child’s Dream” (b/w “Tired of Just Wandering”), an early example of Aussie psych-rock.

That fall, Bower had a nervous breakdown and was forced out of the band. Keays replaced him with lead-guitarist Peter Tilbrook (ex-The Bentbeaks).

In January 1968, Summers and Hopgood cleared out for guitarist Doug Ford (ex-Missing Links) and drummer Colin Burgess (of recent Masters support act The Haze). The Masters sourced songwriter Brian Cadd (of The Groop) for a new song, “Silver People,” which they retitled “Elevator Driver” and issued as their fourth single in February 1968. Meanwhile, Ford and Keays launched a songwriting partnership.

In June 1968, the Masters issued their fifth and final Astor single, the Keays/Ford “Brigette” (backed with the Keays/Tilbrook “Four Years of Five”). The a-side, inspired by the recent Donovan hit “Mellow Yellow,” features strings arranged by John Farrar (then of The Strangers). That summer, the annual Go Set Pop Poll ranked The Masters Apprentices as the number two ‘Most Popular Australian Group,’ second to The Twilights. In October, Tilbrook left and Wheatley switched to bass.

The Masters signed to EMI/Columbia and issued their second single of the Ford/Keays era in March 1969: the music hall “Linda Linda” (b/w “Merry-Go-Round”). The b-side marked their turn toward hard-rock, further evidenced on the follow-up “5:10 Man” (b/w “How I Love You”), issued that July. They closed the year with the bluesy “Think about Tomorrow Today” (b/w “A Dog, a Siren and Memories”). 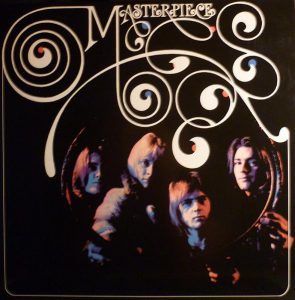 Their long-awaited second album, Masterpiece, appeared in February 1970 on Columbia. It features “Linda Linda,” “5:10 Man,” and the two most recent b-sides, plus eight other Keays/Ford originals, including “Isabella,” “Captivating Voice,” “Titanic,” and the title-track. Also present is the band’s own version of “St John’s Wood,” a Keays/Ford composition first recorded by Brisbane rockers The Sect. To give the album conceptual semblance, producer Howard Gable linked each track with cross-faded orchestral interludes.

In April 1970, the Masters issued “Turn Up Your Radio” (Aus #7, b/w “Jam It Up”). Cut during an overnight session, it features a tired, drunken Keays being physically propped before the microphone. The following month, they boarded the turbine steamship Fairsky for England. 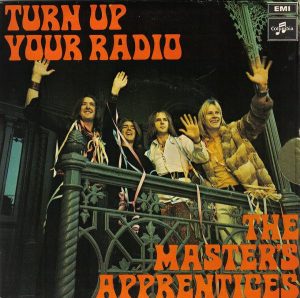 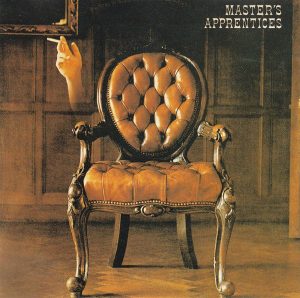 The Masters’ third album, Choice Cuts, appeared in Australia in March 1971. It was their first album issued in the UK and France, where it appeared as Master’s Apprentices on Regal Zonophone. (Both versions add the apostrophe to the band’s name.) The album features six Keays/Ford originals (incl. “Rio de Camero,” “Easy to Lie,” “Our Friend Owsley Stanley 3,” and “I’m Your Satisfier”), three lone-composed Ford numbers (“Michael,” “Catty,” “Death of a King”), and the group-written outro “Song for Joey – Part 2.”

Choice Cuts features cover art by London design firm Hipgnosis. It shows a disembodied hand holding a cigarette beside a tufted Victorian round-back chair (presumably occupied by an otherwise invisible subject). “Because I Love You” was issued a single (Aus #12). EMI culled “I’m Your Satisfier” for single release in Europe, where it went Top 10 in France.

The Masters toured Australia’s west coast and taped their performance at the Nickelodeon Theatre in Perth. The resulting live album, Nickelodeon, appeared in December 1971. It features a six-minute rendition of “Because I Love You” plus three unrecorded Keays/Ford originals (“Future of Our Nation,” “When I’ve Got Your Soul,” “Fresh Air by the Ton”), one new Ford composition (“Light a Fire Within Yourself”), and a 19-minute rendition of “Evil Woman” by American songwriter Larry Weiss (“Bend Me, Shape Me,” “Rhinestone Cowboy”). That song was recently popularized by Spooky Tooth on their 1969 second album Spooky Two.

“Future of Our Nation” was issued on 7″, backed with the non-album “New Day.” Just prior to the release of Nickelodeon, the Masters sailed back to England to capitalize on their UK/European momentum. In late 1971, they re-entered Abbey Road Studio with Jarratt and Brown. 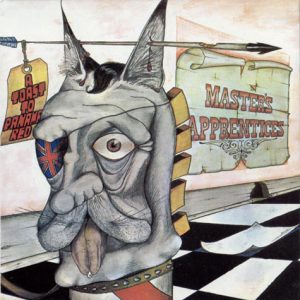 The Masters Apprentices fourth album, A Toast to Panama Red, appeared at the start of 1972 (Dec. 1971 by some sources) on EMI/Columbia (Aus) and Regal Zonophone (UK). Side A features four numbers: “Answer Lies Beyond,” “Beneath the Sun,” and the two-part “Games We Play,” which forms a 12-minute epic. Side B has five cuts: “The Lesson So Listen,” “Love Is,” “Melodies of St. Kilda,” “Southern Cross,” and “Thyme to Rhyme.” All the songs are Keays/Ford originals except “Beneath the Sun,” a Ford solo composition.

Though the primary sessions took place at Abbey Road, “Games We Play” was recorded at Air Studios, where owner George Martin conducted the children’s choir on Part II. As the sessions advanced, tensions mounted between Wheatley (sometimes absent) and the other members. On select passages, Ford handles bass.

A Toast to Panama Red was engineered by Englishman Richard Lush (Mayfields Mule, Badfinger), who later moved to Australia and produced records for Sherbet, Sebastian Hardie, Blerta, and Mondo Rock. The term “Panama red” derives from a Central American strain of marijuana. Keays designed the album’s cover, a painting that shows a bulldog’s head with an arrow through its ears and a candy striped collar. Other details (Union Jack eyepatch, check-floored backdrop, tag and poster credits) add patterns and color to the controversial image.

In Australia, Columbia lifted one single from the album, “Love Is” (b/w “Southern Cross”). The a-side features Ford on a 12-string acoustic guitar loaned by one of his idols, Shadows guitarist Hank B. Marvin.

In early 1972, Wheatley left the band to work full-time as a managing agent at Drum. Soon after, Keays returned to Australia to launch a solo career. Ford and Burgess carried on with Colin’s brother Denny Burgess, who took up bass. This three-man Masters Apprentices cut one song, “Freedom Seekers,” but disbanded that summer.

In March 1973, Keaye played ‘The Lover’ in an Australian staging of The Who‘s rock opera Tommy. His debut solo album, The Boy From the Stars, appeared on EMI in 1974. It features a host of players, including guitarist Lobby Loyde (Coloured Balls) and keyboardist Mal Logan (Carson).

Wheatley took the Aussie supergroup Little River Band under his managerial wing. During 1976/77, he was instrumental in their commercial conquest of the US market.