The Idle Race was an English pop-psych band from Birmingham, best known for the 1967 single “Imposters of Life’s Magazine” and the 1968/69 albums The Birthday Party and Idle Race. Singer Jeff Lynne joined Roy Wood in The Move, which morphed into the Electric Light Orchestra.

The Idle Race had its roots in The Nightriders, a Midlands rock ‘n’ roll band formed in 1959 as Billy King & the Nightriders. The original lineup included rhythm guitarist Dave Pritchard and drummer Roger Spencer. In 1962, singer Mike Sheridan replaced King. They signed to EMI Columbia with bassist Greg Masters and cut four 1963/64 singles. By 1964, they featured lead guitarist Roy Wood, who wrote their 1965 b-side “Make Them Understand,” issued as Mike Sheridan’s Lot.

In January 1966, Wood jumped ship to rival Brumbeat stalwarts Carl Wayne & the Vikings, which swiftly became The Move. Mike Sheridan & the Nightriders hired Wood’s predecessor in The Vikings, Johnny Mann, who quit soon after the departure of Sheridan. As The Nightriders, they hired guitar prodigy Jeff Lynne (of Erdington beatsters The Chads) and released the November 1966 Polydor single “It’s Only the Dog” (b/w “Your Friend,” written and sung by Pritchard).

As psychedelia took hold, the band changed its name to The Idyll Race, then The Idle Race. Wood — now a power player in light of The Move’s rise to stardom — linked them with the fledgling production team of Eddie Offord and Gerald Chevin. The Idle Race were the first act signed to the newly established UK branch of Liberty Records. 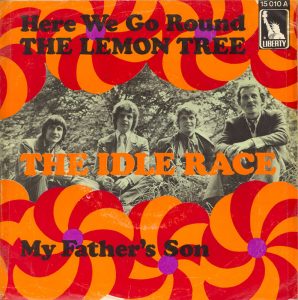 The Idle Race cut the Wood composition “Here We Go ‘Round the Lemon Tree,” which first appeared on German Liberty in July 1967 in an orange-red lollipop sleeve. It was slated for a September UK release with the Prichtard b-side “My Father’s Son.” However, The Move’s own version of “Lemon Tree” — the b-side of their August ’67 third single “Flowers In the Rain” — started getting airplay of its own, prompting UK Liberty to release Lynne’s “Impostors of Life’s Magazine” instead.

In March 1968, Liberty issued the third Idle Race single, “The Skeleton and the Roundabout,” a hopping 2/4 ditty with a pipe organ intro and vintage music hall touches. The b-side, “Knocking Nails Into My House,” is a stately 4/4 singalong in C minor, flanked with echoey fuzz and slapstick effects. The following year, Ambrose Slade and Tinkerbell’s Fairydust released covers of “Knocking Nails.”

Lynne composed both sides of that single and the May release “The End of the Road,” a jolly 2/4 ditty with a double-tracked guitar refrain. They diverged from music hall on the flipside, “Morning Sunshine,” a nocturnal piece with remote, quasi-ethnic drumming and twangy guitar, evocative of darker moments from the surf era (“Apache”). 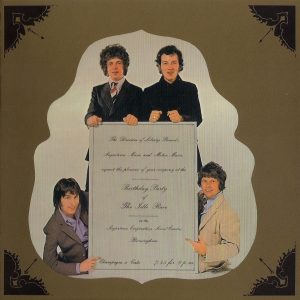 The Idle Race released their debut album, The Birthday Party, in October 1968 on Liberty (UK, US). It contains “Imposters” and both sides of the May single, plus eight further Lynne originals, including “The Birthday,” “On With the Show,” “I Like My Toys,” “Sitting in My Tree,” and “Don’t Put Your Boys in the Army, Mrs. Ward.” Pritchard contributed “Pie in the Sky,” a harmonized 4/4 freakbeat number with a pinched high-end guitar refrain.

The Birthday Party was produced and engineered by Offord, Chevin, and the band. Arranger Cy Payne conducted the strings on “Follow Me, Follow” and “The Lady Who Said She Could Fly.” The latter, with its fluttering violins and flowing Lynne vocal, presages the sound he’d create in the Electric Light Orchestra.

Sessions for The Birthday Party took place during Sundays, when they commuted from Birmingham to London for free time at Advision Studios.

The cover was designed by Paul Whitehead, an emerging graphic artist who also did 1968 cover visuals for Irma Thomas, T.I.M.E., and The Sunshine Company. He later gained renown with his gatefold paintings for Genesis (Nursery Cryme, Foxtrot) and Van Der Graaf Generator (H to He, Who Am the Only One, Pawn Hearts).

Liberty planned a single release of “I Like My Toys” (b/w “The Birthday”) but shelved the idea, despite giving it a catalog number (LBF 15129).

Interim, “Days of the Broken Arrows”

In February 1969, Wood asked Lynne to replace guitarist Trevor Burton in The Move, but Lynne declined this first invitation. 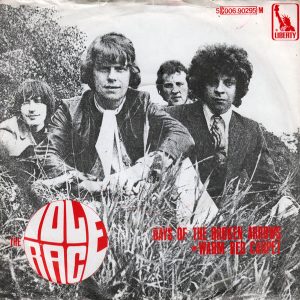 In May 1969, The Idle Race returned with another non-album single, Lynne’s “Days of the Broken Arrows,” which ties a guitar/vocal ballad intro to a mid-tempo stretch of freakbeat amplification and rockabilly licks. The chorus and arrangement derive from The Move’s recent “Wild Tiger Woman.” Pritchard’s b-side, “Warm Red Carpet,” is marked by acoustic picking over a pensive, mono-chordal structure (B minor) and a sitar-droning middle and outro.

In late July, The Idle Race issued their sixth single, Lynne’s “Come With Me,” a marching 2/4 singalong with echoes of The Move’s “Blackberry Way.” It’s backed with Pritchard’s plaintive “Reminds Me of You,” a melancholy love lament with sparse arrangements over a lopsided beat. 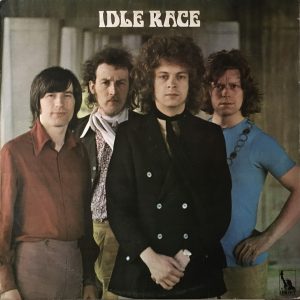 “Come With Me” opens their second album Idle Race, released in November 1969 on Liberty (UK, Australia, Brazil). Lynne wrote nine of the eleven songs, including the celesta-sprinkled harmony ballad “Please No More Sad Songs,” the piano lullaby “A Better Life (The Weatherman Knows),” the phased freakbeat rocker “Hurry Up John,” the 2/4 carnival number “Mr Crow and Sir Norman,” and the folksy “Sea of Dreams.” Pritchard contributed the pre-released “Reminds Me of You” and the galloping “Someone Knocking,” driven by a twangy, circular motif flanked with subway echo.

Idle Race sports a cover image by photographer Michael Hasted (Groundhogs, Thoughts and Words). It shows Lynne (second from right) in his final days without facial hair. Ray Coleman, the editor-in-chief at Melody Maker, wrote the album’s liner notes, which contain short bios on each member.

In February 1970, Lynne moved over to The Move, enticed by Wood’s proposed side project: an orchestral rock band tentatively dubbed Electric Light Orchestra. With Lynne, The Move made their third album Looking On and proceeded to work on the first ELO album, No Answer. To fund that project, they cut a fourth Move album, the 1971 release Message from the Country.

In June, The Idle Race covered the recent Mungo Jerry skiffle hit “In the Summertime” for release as a single in Continental Europe, Japan, and the Southern Hemisphere, where it reached the Top 10 in Argentina. The group-written b-side, “Told You Twice,” is a rootsy number with gritty electric soloing over brisk acoustic strumming.

On July 5, 1970, The Idle Race played a festival at London’s Roundhouse with David Bowie and the Hype, Medicine Head, Quiver, and James Litherland’s Brotherhood: a Colosseum spinoff that soon made an album as Mogul Thrash.

For their next single, The Idle Race covered “Neanderthal Man,” a recent UK No. 2 hit by the 10cc precursor Hotlegs. This version, only released beyond UK/US borders, is backed with Pritchard’s “Victim of Circumstance,” a mid-tempo roots rocker with swampy, psychedelic guitar. 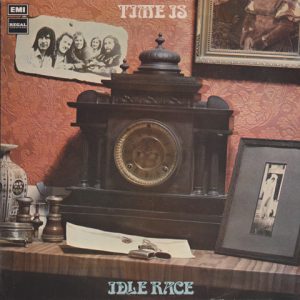 The Idle Race issued their third album, Time Is, in May 1971 on Regal Zonophone. Pritchard wrote the first three songs (“Dancing Flower,” “Sad O’Sad,” “The Clock”) and co-wrote the raunchy rocker “Alcatraz” with Walker and Spencer, who in turn co-wrote “We Want It All.” Spencer himself wrote “By the Sun” while Walker contributed two numbers, “I Will See You” and “After the Rain.” The album also contains covers of Gordon Lightfoot (“Bitter Green“) and Jesse Lee Kincaid (“She Sang Hymns Out of Tune”).

Time Is was co-produced between the band, Kenneth Young, and David Arden, son of manager Don Arden. The cover, designed by Joe McGillicuddy (Nite People, Hardin & York, In the Land of Grey and Pink), shows a vintage clock on a counter of antiques. Photographer Tim Fulford-Brown (Barclay James Harvest, Soft Machine) took the saturated b&w group photo (back cover).

Regal Zonophone planned “Dancing Flower” as a single, backed with “Bitter Green.” Despite allotting a catalog number (RZ 3036), this was cancelled when Pritchard, Spencer, Hopkins, and Walker quit the band.

In 2018, archivists Maide Vale released BBC Radio Sessions 1967-1969, comprised of seven sets for the BBC’s Top Gear program hosted by John Peel. The 6/4/68 set features a cover of “Blueberry Blue” by The Lemon Pipers. The comp ends with a seven-minute live rendition of “Deborah” by Tyrannosaurus Rex.