The Greatest Show on Earth was an English brass-rock band that released the albums Horizons and The Going’s Easy on Harvest in 1970. All eight members initially grouped in the Ossie Laine Show, an R&B covers band that cut an album for the Spanish market. Bassist Norman Watt-Roy later surfaced in Ian Dury’s Blockheads.

Guitarist Garth Watt-Roy (b. 1947, Bombay, India) and his bassist brother Norman (b. 1951, Bombay) got their starts in the London psych-rock quartet The Living Daylights, which issued two 1967 Philips singles: “Baila Maria” (b/w “Always With Him”) and “Let’s Live for Today” (b/w “I’m Real”). The latter a-side is the earliest English translation of the 1966 Italian hit “Piangi Con Me” by The Rokes. (Later in 1967, a cover by US popsters The Grass Roots became a Top 10 Billboard hit and Vietnam-era anthem.) Ex-Bluesology guitarist Caleb Quaye (later of Hookfoot and the Elton John Band) produced both singles.

In 1968, the brothers joined the Ossie Laine Show, the UK backing band of American soul singer Ossie Laine. They released one album, Maddox 2, on the Spanish Edigsa label. It features covers of hits by Jackie Wilson (“Higher and Higher”), Eddie Floyd (“Knock on Wood”), Wilson Pickett (“Midnight Hour”), Leon Haywood (“Mellow Moonlight”), The Temptations (“It’s Growing”), and Sly & the Family Stone (“Sing a Simple Song”), plus versions of the Jay Ferguson-penned Spirit song “Fresh Garbage” and the Jeff Beck/Rod Stewart composition “Rock My Plimsoll.” They named the album after the Maddox nightclub on Costa Brava, where they did a summer-long residency.

When Laine returned to his native New Orleans, the eight musicians reconfigured as The Greatest Show on Earth. The lineup featured the two Watt-Roy brothers plus drummer/singer Colin Horton-Jennings, keyboardist Mike Deacon, percussionist Ron Prudence, trumpeter Dick Hanson, and saxophonists Ian Aitcheson and Tex Philpotts. In this new iteration, they played brass-rock-soul originals in the vein of Colosseum, Galliard, and American acts like Dreams and Second Coming. 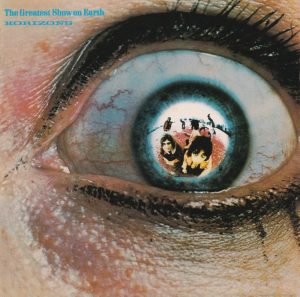 The Greatest Show on Earth released their debut album, Horizons, in the UK and Germany in March 1970 on Harvest. It features longer versions of the two aforementioned songs and six new originals: five written primarily by Horton-Jennings (incl. “Sunflower Morning,” “Angelina,” “Day of the Lady,” and “Skylight Man”) and the 11-minute group-composed title-track.

Horizons was produced by Jonathan Peel (not to be confused with BBC Radio One DJ John “Peel” Ravenscroft), who also produced albums that year by Panama Limited, Orange Bicycle, Toe Fat, and Gravy Train. London design firm Hipgnosis conceived the cover image: a zoomed-in, fish-eyed view of the band in the pupil of an alarmed woman’s left eye. The image is mirrored on the back with a different fish-eyed view. On the inner-spread, the subject (background) gazes gap-mouthed into a packed, checker-floored stadium, all super-imposed against a cloudy, high-altitude backdrop.

The Greatest Show on Earth promoted Horizons with high-profile festival appearances, including the second International Essen Blues & Pop Festival in April 1970. They performed on the second day of the event, where they traded the stage with Black Sabbath, Keef Hartley Band, Kraftwerk, Krokodil, Little Free Rock, Marsha Hunt, Renaissance, and Xhol Caravan. Also that month, they played the Rose d’Or Festival at the Casino de Montreux with Ekseption, IF, Golden Earring, The Flock, Quintessence, and Ashton Gardner & Dyke. On June 28, they played the Festival of the Golden Guitar at the Cour Monseu in Ciney, Belgium, alongside Family and the Benelux artists Waterloo, Brainbox, and Arkham.

In September 1970, The Greatest Show on Earth issued a new single, the Deacon/Prudence/Phillpotts composition “Tell the Story” (b/w the Garth original “Mountain Song”). The a-side appears as the last track on The Going’s Easy, released that November. The album features three songs per side, including “Story Times and Nursery Rhymes,” “The Leader,” “Magic Woman Touch,” and the nine-minute epics “Love Magnet” and “Borderline.”

Peel produced The Going’s Easy with engineers Jeff Jarrett (Ginhouse, Quatermass, Locomotive, Procol Harum) and John Kerlander. The Hipgnosis gatefold shows the band huddled inside a train compartment (front) and a motion-blurred image of them looking out from the inside (back). On the inner-spread, they’re slumped across the terminal with printed lyrics overhead.

Like its predecessor, The Going’s Easy (cat# SHVL 783) followed a release by Harvest label-mates Pete Brown & Piblokto! (Thousands On a Raft) and directly preceded the second album by Forest (The Full Circle).

Between the two albums, The Greatest Show on Earth did two sessions for Radio One DJ Mike Harding, performing five songs in all, including the unrecorded numbers “Check Me Into Your Life” and “Time.”

The Greatest Show on Earth disbanded in mid-1971. Everyone except Aitcheson, Prudence, and Phillpotts continued in the music industry.

Garth Watt-Roy joined Fuzzy Duck for their 1971 post-album single “Double Time Woman” (b/w “Just Look Around You”). As a vocalist, he sings on Speech, the 1972 fourth and final album by Steamhammer, released on the German underground label Brain. Under the alias Leon Paul-Phillips, he released two albums of stage/screen instrumentals — London’s Underground (1972) and London’s Underground No. 2 (1975) — on the UK library label Conroy. During the mid-’70s, Garth played on albums by East of Eden and rustic-rockers Limey. In 1980, he surfaced in The Q-Tips, an R&B octet fronted by Paul Young. He subsequently toured with Adam Ant on the singer’s 1982–84 Friend or Foe and Strip tours.

Norman Watt-Roy teamed with guitarist John Turnbull (Skip Bifferty, ARC), drummer Stewart Francis (Forever More), and keyboardist Graham Maitland (Les Fleur de Lys) in the rustic-rock quartet Glencoe, which issued two albums on Epic in 1972/73. Norman and Turnball then teamed with another Bifferty alumni, Mick Gallagher, in the band Loving Awareness, which issued a self-titled album (Netherlands only) in 1976. That band subsequently teamed with ex-Byzantium musician Chaz Jankel in the Blockheads, the backing band of Ian Dury. During the ’80s, Norman played on records by Jankel (Questionnaire), The Clash (Sandinista), The Selecter, Ellen Foley, Carol Grimes, and Roger Daltery.

Horton-Jennings submitted four songs to The Hollies for their 1972 album Romany, including “Magic Woman Touch.” As a single, their version charted in New Zealand (#4), the Netherlands (#8), Germany (#32), and Australia (#33). He then formed rustic-rockers Taggett with ex-Gracious bassist Tim Wheatley. Their one album, released on United Artists in 1974, includes a version of the unrecorded Greatest Show on Earth song “Time” (also recorded by The Dealians and Jack Carone). Later that decade, Horton-Jennings cut three Harvest singles in soft-rockers Chaser and sang backing vocals on the 1978 debut album by Family-offshoot Axis Point.

Hanson guested on Taggett and joined the Rumour Brass, which played on 1976–78 albums by Graham Parker and his backing band The Rumour (with and without Parker). He also played on late ’70s/early ’80s albums by Supercharge, The Inmates, Fingerprintz, and Jona Lewie.

Deacon joined Vinegar Joe and played on their 1972/73 second and third albums, Rock ‘N Roll Gypsies and Six Star General. In subsequent years, he played on albums by Kiki Dee (I’ve Got the Music in Me), Alan Sorrenti, Dr. Feelgood, Darts, and John Entwistle.