The Dog That Bit People was an English four-piece that released a self-titled album on Parlophone in 1971. The band was formed by bassist Mick Hincks and drummer Bob Lamb after the breakup of their prior outfit Locomotive.

The Dog That Bit People emerged from the final lineup of Locomotive, an R&B/psych group from Birmingham whose singular album, We Are Everything You See, was belatedly released on Parlophone in February 1970, months after the departure of singer, keyboardist, and songwriter Norman Haines. The final lineup consisted of Hincks, Lamb, guitarist John Caswell, and keyboardist Keith Millar.

Hincks and Lamb joined Locomotive in early 1968, in time for the band’s second single “Rudi’s In Love” (b/w “Never Set Me Free”), a ska-pop recording that hit #25 on the UK singles chart. The band released a third single as Steam Shovel, then recorded their album as a quintet augmented by a three-piece brass section. The album finally appeared a year after its completion because Parlophone optioned singles from the sessions.

During the delay, Haines formed his own namesake band and made one album, Den of Iniquity, then retired from the scene. Hincks and Lamb hired Caswell and Millar, both prolific songwriters with rustic, folksy leanings. In March 1970, the new four-piece Locomotive issued the single “Roll Over Mary” (b/w “Movin’ Down the Line”), both Millar originals.

Due to vast musical differences between the Caswell/Millar lineup and prior incarnations of Locomotive, they picked a new name, “The Dog That Bit People,” the title of a short story about a biting Airedale Terrier, originally published in My Life and Hard Times, the 1933 autobiography of American humorist and author James Thurber.

The band did a fall/winter van tour of freezing Holland and Germany, then headed to Abbey Road Studios to record their album. 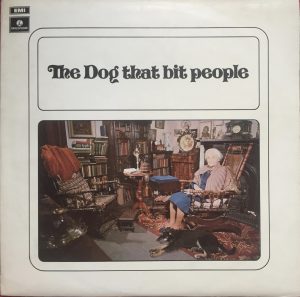 The Dog That Bit People debuted with the Caswell/Millar single “Lovely Lady” (b/w the Millar/Hincks “Merry-Go-Round”) in January 1971 on Parlophone.

The a-side appears on their self-titled album, released that February. The Dog That Bit People features four Millar originals (“Goodbye Country,” “Sound of Thunder,” “Red Queen’s Dance,” “Tin Soldier”), three Caswell cuts (“Cover Me In Roses,” “A Snapshot of Rex,” “Walking”), and another Caswell/Millar co-write (“Mr. Sunshine”). Lamb assisted them on “The Monkey and the Sailor.” The closing “Reptile Man” is a group composition.

Across the album’s 12 songs, The Dog That Bit People fuses Nilssonian/Revolver-esque craft with the airy effervescence of rustic contemporaries America, Home, and Byzantium: a match exemplified on the opener “Goodbye Country.” Millar plays piano, organ, Mellotron, and harmonica; he and Caswell both play electric and 12-string guitar and harmonize with Hincks.

The Dog That Bit People was produced by the band’s manager, Jim Simpson, a West Midlands rock mogul who initially played in Locomotive and also managed Black Sabbath, Bakerloo, Tea and Symphony, and Indian Summer. The album was engineered by Peter Vince, who worked on recordings by The Hollies, Donovan, The Zombies (Odessey and Oracle), The Gods, Cliff Richard, Olivia Newton-John, and Colin Blunstone.

The Dog That Bit People wandered off in late 1971. Hincks played on the 1972–74 albums Bleach and Rogues and Thieves by Brummie singer/songwriter Raymond Froggatt. He then left the industry and took up residence in Spain.

Lamb joined a late-stage Idle Race and later surfaced in the Steve Gibbons Band (with Caswell) and its synthpop offshoot The System. He produced Caswell’s 1982 solo album Vineyards In Japan and helmed numerous recordings by UB40, Weapon of Peace, Stephen Duffy, and Lilac Time.

The Dog That Bit People was first reissued in 1994 by the short-lived archival label Shoestring Records, which also reissued Den of Iniquity. That and all subsequent reissues (Esoteric Recordings, Mayfair Music) add “Merry-Go-Round” as a bonus 13th track.

Alternative TV
Alternative TV were an English post-punk/industrial band from London that released four albums on...
Cold Blood
Cold Blood were an American brass-rock band from San Francisco. Members: Larry Field (guitar), L...
Gordon Haskell
Gordon Haskell (April 27, 1946 — Oct. 15, 2020) was an English musician, vocalist, and songwriter ...
Irish Coffee
Irish Coffee were a Belgian hard rock band that was active during the first half of the 1970s. Signe...
Blind Faith
Blind Faith was an English hard-rock/psych band that released a self-titled album on Atco in 1969....

1 thought on “The Dog That Bit People”