The Crazy World of Arthur Brown was an English psych-rock band that released the single “Devil’s Grip” on Track Record in 1967, followed by a self-titled album (co-produced by Pete Townshend) and the single “Nightmare” in 1968. The band is best known for the shock theatrics of vocalist Arthur Brown, whose hair-lighting antics ignited performances of their signature hit “Fire.”

Arthur Brown hailed from Whitby and attended the University of Reading, where he formed his first band, Blues and Brown. In 1966, he studied theater in Paris, where he cut two songs for the French-Italian drama La Curée (aka The Game Is Over), a modern-day adaptation of Émile Zola’s 1872 novel by director Roger Vadim.

Brown returned to London at the start of 1967 for a brief stint with soul-rockers the Ramong Sound, which soon became The Foundations. By the time they signed with Pye, Brown teamed with organist Vincent Crane, who briefly gigged with his namesake soul-jazz outfit the Vincent Crane Combo. With bassist Nick Greenwood and drummer Drachen Theaker, they became the Crazy World of Arthur Brown.

Brown drew attention for his theatrics on stage, where he donned horror makeup and a fire helmet, enacted during renditions of the Crazy World showpiece “Fire.” 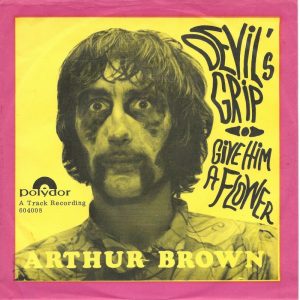 They impressed Pete Townshend and Who manager Kit Lambert, who signed Crazy World to the Who’s Track Record label (Jimi Hendrix, John’s Children). Townshend and Lambert co-produced the debut Crazy World single “Devil’s Grip,” a Brown composition backed with the Crane co-write “Give Him a Flower.” The single dropped in September 1967 (UK, Denmark). 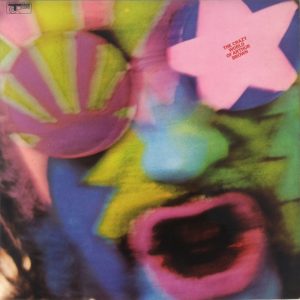 The Crazy World of Arthur Brown released their self-titled debut album in June 1968 on Track (UK) and Atlantic (US). Its lead-off single, “Fire,” hit the top 10 in multiple markets, reaching No. 1 in the UK and Canada and No. 2 in the US.

Side one starts with Brown’s “Prelude/Nightmare” and proceeds through the Brown/Crane co-credited “Fanfare/Fire Poem,” “Fire,” and “Come and Buy.” The side, linked by lyrical themes about the horrors of hell, wraps with Brown’s “Time” and Crane’s “Confusion.” Side two contains covers of James Brown (“I’ve Got Money”) and Screamin’ Jay Hawkins (“I Put a Spell on You”). The latter — one of rocker’s first ominous numbers (first recorded in 1956) — was recently re-popularized by the Alan Price Set. Three further Brown/Crane numbers complete the album: “Spontaneous Apple Creation,” “Rest Cure” (the “Fire” b-side), and the seven-minute “Child of My Kingdom.”

Lambert produced The Crazy World of Arthur Brown with associate Townshend. The album appeared in mono and stereo in the UK; monophonic copies trim “Child of My Kingdom” to 6:04. At Atlantic’s request, Lambert added brass and strings to the stereo version to mask perceived deficiencies in Theaker’s drumming. On “I Put a Spell on You” and “Child,” Theaker is deputized by jazz drummer John Marshall (later Nucleus, Soft Machine). In addition to organ, Crane handles vibes and orchestral arrangements. Greenwood (listed as Sean Nicholas) doesn’t play on “Fire,” which features Crane on bass pedals.

The Crazy World of Arthur Brown sports cover art by David King, which shows a technicolor closeup of Brown overlaid with circus holograms (front) and a b&w closeup of the singer with a shocked expression (back). King also designed 1967/68 covers for The Who (The Who Sell Out) and Jimi Hendrix (Axis: Bold as Love, Electric Ladyland).

In France, the album appeared on Polydor as Revisited with a b&w cover that shows a profile view of Brown with his name in bubble letters.

Brown and Crane were later forced by court order to share credits on “Fire” with the team of Mike Finesilver and Peter Ker, who noted melodic similarities between that song and their composition “Baby, You’re a Long Way Behind.” (Finesilver and Ker collaborated with Dave Edmunds on the second Love Sculpture album, Forms and Feelings). 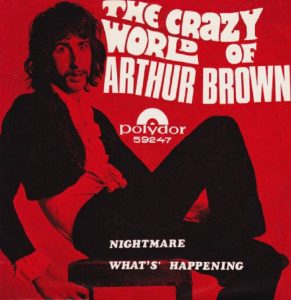 Theaker — who balked at a planned stateside tour due to aviophobia — was replaced by drummer Carl Palmer, formerly of Brummie mod rockers The Craig (with the nucleus of Galliard). In early 1969, Crazy World recorded a second album comprised of a song suite divided into four main parts: “The Country” (four subsections), “The City,” “The Cosmos” (five subsections), and “The Afterlife.” Label heads blocked the album’s release over its perceived lack of commercial appeal. It remained vaulted until 1988 when the UK psych label Reckless Records issued the contents as Strangelands.

After Crazy World’s first US tour, Crane suffered a nervous breakdown and entered a Bandstead mental hospital for three months. He rejoined the band for a second tour of the US, where Brown disappeared to a commune.

Vincent Crane and Palmer returned to the UK and formed Atomic Rooster, which cut a 1970 debut album with bassist Nick Graham. After the departures of Palmer (to Emerson Lake & Palmer) and Graham (to Skin Alley), Crane hired drummer Paul Hammond and ex-Attack guitarist John Du Cann for a round of Rooster activity, starting with the late 1970 release Death Walks Behind You.

Drachen Theaker formed the Beefheart-influenced Rustic Hinge with bassist Peter Pavli (High Tide) and guitarist Andy Rickell, who played on the Strangelands sessions. Documentation of Rustic’s existence is compiled on the 1988 Reckless release Replicas, which contains eight numbers recorded circa 1970, including the 20-minute suite “T On the Lawn for Three.”

Nicholas Greenwood recorded a solo album in 1970 with drummer Eric Peachey. As it sat unreleased, they joined Khan with guitarist Steve Hillage, formerly of Arzachel with keyboardist Dave Stewart (Egg). They made one album, Space Shanty, in 1972. Greenwood’s album, Cold Cuts, appeared that year on Kingdom Records.

Arthur Brown resurfaced as the frontman of Kingdom Come, an electro-space-rock band that released three albums between 1971 and 1973. He debuted as a solo artist with the 1975 Gull release Dance. In 1977, he appeared on the all-star sci-fi concept album Intergalactic Touring Band and issued his second solo album, Chisholm In My Bosom, which includes another remake of “I Put a Spell On You” and an 18-minute title track.

Brown and Crane reunited on the 1979 concept album Faster Than the Speed of Light, produced by Klaus Schulze and released in Germany on his Innovative Communication label.

The Lilac Time
The Lilac Time is an English sophisti-pop band, formed in 1986 by singer Stephen Duffy. Their initia...
Audience
Audience was an English folk-psych band that debuted with the 1969 album Audience on Polydor. Betwee...
Limey
Limey was an English rustic-rock band that cut an eponymous 1975 album on RCA. Guitarist–singer Bria...
Hubert Laws
Hubert Laws (born Nov. 10, 1939) is an American flutist from Houston. He is the eldest of kin in t...
Mick Karn
Mick Karn — aka Andonis Michaelides (July 24, 1958 — Jan. 4, 2011) — was an English-Cypriot multi-...