The Cars were an American New Wave/modern-rock band that released six studio albums on Elektra between 1978 and 1987. Their first two albums, The Cars (1978) and Candy-O (1979), spawned a slew of radio-rock evergreens, including “Just What I Needed,” “My Best Friend’s Girl,” “Good Times Roll, and “Let’s Go.”

A turn toward icy modernism on Panorama (1980) was further explored on Beatitude, the debut solo album by frontman Ric Ocasek. A slew of videos behind their fourth album Shake It Up (1981) and its multi-platinum followup Heatbeat City (1984) made the band a fixture of the cable station MTV. Their biggest hits from this period include “Shake It Up,” “Since You’re Gone,” “You Might Think,” “Magic,” and the ballad “Drive.”

The Cars evolved from the Boston jazz-funk bar band Cap’n Swing, which included singer/guitarist Ric Ocasek (aka Richard Otcasek), singer Ben Orr (aka Benjamin Orzechowski), and guitarist Elliot Easton. Ocasek and Orr had partnered earlier in the folk combo Milkwood, which released the 1972 album How’s the Weather on Paramount Records. More recently, the pair had gigged as Richard and the Rabbits with keyboardist Greg Hawkes, who also toured with the comedic act Martin Mull and His Fabulous Furniture.

In late 1976, as Cap’n Swing courted local press and radio attention, the rhythm section was ousted in favor of ex-Modern Lovers drummer David Robinson and Orr, who took up bass. With Hawkes roped into the fold, the band steered toward New Wave rock and renamed itself The Cars.

In early 1977, The Cars cut a nine-song demo. One track, “Just What I Needed,” got rotated on the Boston FM radio stations WBCN and WCOZ. This drew several label offers and the band signed to Elektra later that year.

In February 1978, The Cars flew to London and entered AIR studios with producer Roy Thomas Baker (Queen, Be-Bop Deluxe, Gasolin’, Pilot, Lone Star, Peter Straker, Starcastle, Journey). As an initial taster, Elektra issued the Orr-sung “Just What I Needed” (b/w “I’m in Touch with Your World”) as their first single on May 29. The a-side builds layer-by-layer from a matted riff and tense vocal to a swelling bridge and anthemic chorus, complemented by a wavy, swirly keyboard break. The flip is an experiment in library synth sounds and odd percussion, reminiscent of Gentle Giant circa Interview. Both sides are included on their self-titled debut album, released on June 6, 1978. 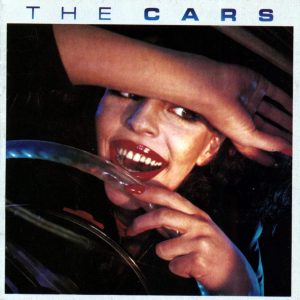 The Cars features nine Ocasek originals, five sung by Ocasek himself (4/5 of side one) and four sung by Orr (3/4 of side two). The three singles — the syncopated/echoey “Good Times Roll,” the handclap/harmony-driven “Best Friend’s Girl,” and the aforementioned “Just What I Needed” — are grouped together on side one, each precisely timed at 3:44. The first two are mimicked, respectively, on the side-two numbers “You’re All I’ve Got Tonight” and “Bye Bye Love.” All five songs, plus the album-closer “All Mixed Up,” roll with a mid-tempo heaviness. The two deviations, aside from the sui generis “I’m in Touch with Your World,” are the slow, electro-laden “Moving In Stereo” and the faster, perkier “Don’t Cha Stop,” the most conventional New Wave number.

Stylistically, The Cars weds the quirkly touches — bleepy, swirly keyboards; staccato, nervy riffs; hiccuping vocals — of select New Wave contemporaries (XTC, Squeeze, The Boomtown Rats, Elvis Costello & the Attractions) with the lavish layers and epic feel of other Baker-associated acts from this period. The cover features Russian model Nataliya Medvedeva, the first of several women pictured on Cars album covers in lieu of the band (ala Roxy Music and Charlie).

During the second half of 1978, The Cars played select dates opening for Rainbow (Detroit) and Styx (San Francisco, San Diego). That August, they co-headlined an event at Cleveland’s Municipal Stadium with Fleetwood Mac, Bob Welch, and Todd Rundgren and Utopia. After headlining over The Fabulous Poodles at London’s Lyceum that November, The Cars topped most subsequent bills. 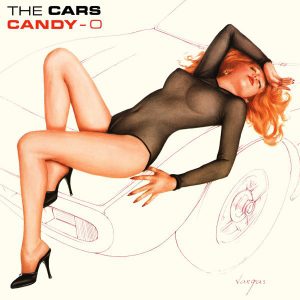 In early 1979, The Cars entered LA’s Cherokee Studios with Baker to cut a new batch of Ocasek originals. The resulting Candy-O hit stores on June 2. The lead-off track and single, “Let’s Go,” has an arching synth line with a proto-zolo spiraling sound similar to the opening riff on “My Tulpa” by Magazine. Another Hawkes’ experiment, the bleepy electro-static “Shoo Be Doo,” functions as a prelude to the album’s title-track, rendered heavy by Baker’s thick production and Robinson’s echoing drums.

In all, Candy-O features 11 songs that range from synth-swirling harmony pop (“It’s All I Can Do”) and bleepy uptempo cuts (“Night Spots”) to the album’s heady closing trifecta: the echoey stop/start “Lust for Kicks,” the brisk/galloping “Got a Lot on My Head,” and the intense/unfolding “Dangerous Type.” Between Ocasek and Orr, lead vocals are split 6/4 with both sharing the honors on “Since I Held You.”

The cover to Candy-O was illustrated by pin-up painter Alberto Vargas, aged 82 at the time of this album. The model was actress Candy Moore, who as a teenager starred on the 1960s sitcom The Lucy Show with comedian Lucille Ball. The tour behind this album included three nights at Hollywood’s Gibson Amphitheatre with support by NYC electro-punks Suicide.

Les Séguin
Les Séguin were a Québécois folk-rock duo comprised of the brother/sister team of Richard Séguin a...
White Summer
White Summer were a Chicago-area rock trio that was active during the mid-1970s. Members: Jimm...
Steve Marcus
Steve Marcus (Sept. 18, 1939 — Sept. 25, 2005) was an American saxophonist from N.Y.C. Discograp...
Scritti Politti
Scritti Politti was an English art-pop band from Leeds that cut three EPs on self-press St. Pancra...
James Mason
James Mason is an American keyboardist, guitarist, songwriter, and producer who released the album...