The 3 Pieces were an American jazz-funk/soul trio that released the album Vibes of Truth on Fantasy in 1975.

The 3 Pieces coalesced in Washington D.C. around the talents of trombonist/keyboardist Lincoln Ross, bassist Jerry Wilder, and percussionist Andre Richardson. Ross had written the song “Gut Level,” recorded by The Blackbyrds. Through this liaison, the trio found a mutual producer in Donald Byrd. 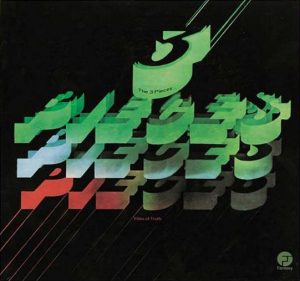 In 1975, The 3 Pieces released Vibes of Truth on Fantasy. The track “I Need You Girl” was issued as a single in two pressings: FTC 116 (b/w “Short’nin’ Bread”) and 742 (b/w “Cool It”). Other cuts from the album include “Virtue,” “Self Dealin’,” “Concrete Jungle,” and the title-track. All nine songs were written collectively by the band, who are credited as “Three Pieces” on the LP and 7″ labels but as “The 3 Pieces” on the album cover. Guest musicians on the album include percussionist Bobbye Hall, Blackbyrds guitarist Orville Saunders, and Ray Parker Jr., who plays on “Short’nin’ Bread.” The album was engineered by Eddie Harris and recorded at Berkeley’s Fantasy Studios.

Ross concurrently played on the Friends & Co. release Collage by Eddie Drennon & The B.B.S. Unlimited. During the late 1970s, he played on albums by E.L. James, Hilton Felton, and Elbernita “Twinkie” Clark. He also appears on the 1982 single “DC Groove” (b/w “Feed the Fire”) by Static Disruptors. That same year, he single-handedly revived the 3 Pieces name for the go-go 12″ “Iwishcan William” on DL Records.

Richardson appears on the 1977 release Freedom Serenade by Malone & Barnes and Spontaneous Simplicity. Wilder resurfaced in Chuck Brown and The Soul Searchers and played on 1980/81 albums by Sharon Redd, Evelyn King, and Bobby Thurston.

Original copies of Vibes of Truth have become highly collectible, trading for three-figures on the international Rare Groove market. It was first reissued in 1995 on BGP Records (U.K.). Three CD issues appeared during the 2000s on BGP, Fantasy, and Japan’s P-Vine. In 2017, a new vinyl edition appeared on Fantasy.