Tear Gas was a Scottish hard-rock band that released the album Piggy Go Getter on Famous/Paramount in 1970, followed by an eponymous album on Regal Zonophone in 1971. They then teamed with singer Alex Harvey in the long-running Sensational Alex Harvey Band.

Tear Gas released their first album, Piggy Go Getter, in October 1970 on Famous. It features 10 songs written by Batchelor and Cleminson, including the lengthy numbers “Night Girl” and “Look What Else Is Happening.” This and the followup were produced by Tony Chapman.

Hugh was briefly in psych-rockers the Stoics with Frankie Miller and James Dewar (Stone the Crows, Robin Trower). Their one single, “Earth, Fire, Air and Water” (b/w “Search for the Sea”), appeared on RCA Victor in 1968. Ted was briefly in the Decca singles act Dream Police with singer Hamish Stuart, later of the Average White Band. 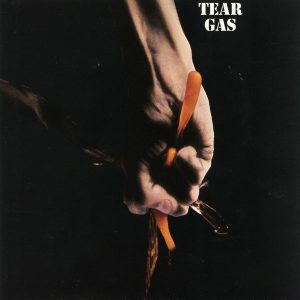 The band’s second album, simply titled Tear Gas, appeared in August 1971 on Regal Zonophone. Batchelor and Cleminson co-wrote six of the nine songs, including “That’s What’s Real,” “I’m Glad,” “Lay It On Me,” and “The First Time.” Tear Gas also includes covers of Jethro Tull (“Love Story”) and Elvis Presley (“Jailhouse Rock” and “All Shook Up,” both recorded live).

The instrumental core of the Tear Gas lineup — Cleminson, the McKenna’s, and Glen — teamed with vocalist Alex Harvey in the Sensational Alex Harvey Band. SAHB released eight studio albums between 1972 and 1978, including one without Harvey. Batchelor worked as their producer.

Cleminson joined the 1979/80 lineup of Nazareth and later served as a backing player for Elkie Brooks, Midge Ure, Bonnie Tyler, and Fish.