Taste was an Irish blues-rock power trio that was active between 1968 and 1970. They issued two turn-of-the-decade albums on Polydor before guitarist/vocalist Rory Gallagher disbanded the group to launch his solo career. Two live documents and a mini-album of unreleased early recordings were issued post-breakup.

Gallagher formed his first iteration of the band in August 1966. He was fresh off a three-year stint with The Impact, an R&B/beat combo that started as a six-piece showband and gradually pared down to a trio. Liking that format, he assembled The Taste in Cork, Ireland, with bassist Eric Kitteringham and Norman Damery.

They toured Ireland and gigged in Hamburg, Germany, over a two-year period. In 1968, The Taste issued the single “Blister on the Moon” (b/w “Born on the Wrong Side of Time”), both Gallagher originals, on Major Minor. Weeks later, Gallagher moved to Belfast and assembled a new lineup, simply called Taste, with bassist Charlie McCracken and drummer John Wilson. Rory’s brother, Donal Gallagher, managed the band.

Taste signed with Polydor and recorded their debut album at De Lane Studios, Soho, in August 1968. On November 26, they played one of two opening slots (along with fellow newcomers Yes) at Cream‘s farewell performance at the Royal Albert Hall, London. 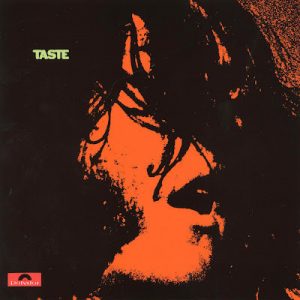 Taste was produced by Tony Colton, a one-time solo singer and then-current leader of folksters Poet and the One Man Band. The album’s front and back covers feature xeroxed, orange-tinted close-up shots of Gallagher. The sleeve was designed by Paragon Publicity, which also did album covers for Audience, Blossom Toes, Fat Mattress, and Trinity.

“Blister on the Moon” appears on the 1969 European Polydor comp Hits Made By the Supergroups with cuts by The Move, Savage Rose, The Who, John Mayall, The Easybeats, and the Jimi Hendrix Experience. “Born on the Wrong Side of Time” appears on the two-LP label comp Deep Overground Pop with tracks by the Crazy World of Arthur Brown, Second Hand, Cream (“Passing the Time“), and Rare Amber.

Taste appeared on ATCO in the US, where the trio opened for that label’s hottest property, supergroup Blind Faith, on a 1969 tour. “Hail” appears on the ATCO white label promo sampler Atco Sales Meeting Summer 1969 with cuts by the Bee Gees, Blues Image, Ike & Tina Turner, Otis Redding, and the New York Rock Ensemble. 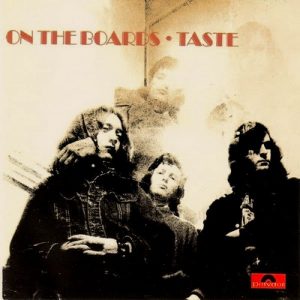 Taste’s second album, On the Boards, appeared in January 1970. The album’s lead-off track, “What’s Going On,” hit #1 on the German singles chart and reached the UK Top 10. Gallagher composed all 10 tracks, which include the second single “If I Don’t Sing I’ll Cry” and the fan favorites “I’ll Remember,” “It’s Happened Before, It’ll Happen Again,” and “Eat My Words.”

Colton produced On the Boards with engineer Eddie Offord. The pair also worked on Time and a Word, the 1970 second album by Yes, for who Offord would serve as a studio sixth-wheel in the coming years. Separately, Colton worked with Atomic Rooster on their self-titled debut while his own band morphed into Heads Hands & Feet.

Sessions for On the Boards took place a year before the release date. In addition to guitar and vocals, Gallagher plays alto saxophone and harmonica on select tracks.

Taste played the 1970 Isle of Wight Festival that August along with Family, Procol Harum, Chicago, Cactus, Ten Years After, Free, Jethro Tull, Emerson Lake & Palmer, Supertramp, Groundhogs, Sly & the Family Stone, and numerous other acts. Taste’s set occurred on day three (Friday 28th) of the five-day event, between sets by Lighthouse and Tony Joe White. On the strength of Taste’s performance, filmmaker Murray Lerner (Message to Love: The Isle of Wight Festival) filmed their set in its entirety, despite his initial plan to limit filming of all non-headliners to two songs per set.

Gallagher disbanded Taste shortly after their Isle of Wight appearance, disgruntled in part by Polydor’s choice of singles, which he didn’t learn about until they hit the charts. Their performance was issued posthumously on the 1971 Polydor release Live at The Isle of Wight, comprised of six numbers totalling 47 minutes, including a 14-minute rendition of “Catfish.”

Also in 1971, Polydor issued Live Taste, taken from a show at the Montreux Casino, Switzerland. In 1972, BASF issued Taste First, a lost album recorded in 1967 by the Kitteringham/Damery lineup (The Taste). It features seven Gallagher originals, including “Norman Invasion” and the seven-minute “Take It Easy Baby.”

That same year, Gallagher released his first two solo albums, Rory Gallagher and Deuce, both on Polydor. Over the next 16 years, he released eight studio albums and three official live discs. His popularity peaked with the 1976 Chrysalis release Calling Card, produced by Roger Glover.

Gallagher died in 1995 at age 47 after a liver transplant. The following year, McCracken and Wilson reformed Taste in Gallagher’s honor with guitarist/singer Sam Davidson and toured until 2010.

William Bell
William Bell (born July 16, 1939) is an American soul singer from Memphis. Discography: Th...
Alquin
Alquin were a Dutch symphonic/hard-rock band that released four albums and a live recording on Pol...
National Head Band
The National Head Band was an English blues-psych band that released the album Albert 1 on Warner...
Fields
Fields was an English organ-rock trio that released a self-titled album on CBS in 1971. They were fo...
Madura
Madura were an American jazz-rock trio from Chicago that released a self-titled double album on Co...