Talking Heads were an American New Wave/art-rock band that released eight studio albums on Sire between 1977 and 1988.

Talking Heads developed from a partnership between guitarist/songwriter David Byrne and drummer Chris Frantz. The two were students at Rhode Island School of Design, where they formed a band called The Artistics in 1973. In need of a bassist, Frantz encouraged his girlfriend, Tina Weymouth, to take up the instrument. The trio renamed themselves Talking Heads — a term in news industry parlance for anchors who are only seen from the chest-up — and moved to New York City, where they played their first concert opening for The Ramones at CBGB’s on June 5, 1975.

In 1976, Talking Heads demoed material and became one of the Bowery’s hottest attractions. That November, the trio signed to Sire Records, which issued their debut single “Love → Building on Fire” (b/w “New Feeling”) the following March. The band then added keyboardist Jerry Harrison, formerly with Jonathan Richman’s Modern Lovers, as a fourth member. This lineup would hold for the remaining 14 years of the band’s formal existence. 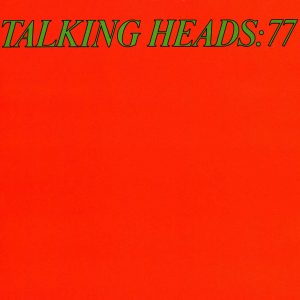 Their first album, Talking Heads: 77, was released in September 1977. It features 11 songs songs, including the popular cuts “The Book I Read,” “Don’t Worry About the Government,” “Tentative Decisions,” “First Week/Last Week…Carefree,” and a re-recorded “New Feeling.” The centerpiece, “No Compassion,” contains the line They say compassion is a virtue, but I don’t have the time… later cited by Rolling Stone as “perhaps the most telling line of the seventies.”

The album spawned three singles: the frenetic “Pulled Up,” the jubilant “Uh-Oh, Love Comes to Town” (featuring Frantz on steel pan) and the ominous “Psycho Killer” (b/w the non-album “I Wish You Wouldn’t Say That”). Co-production was handled by Tony Bongiovi and Lance Quinn, whose other joint credits from the period include jazz-funk albums by Joe Thomas, Jimmy McGriff, and Lonnie Smith.

In January 1978, Talking Heads toured the U.K. and Benelux with support from XTC. After the cancellation of a planned U.S. west coast tour with Elvis Costello, the Heads performed another U.K. leg with support from Dire Straits. 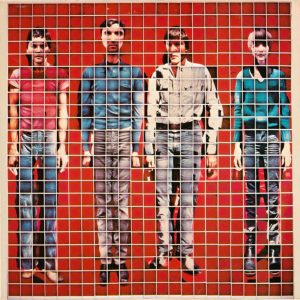 Talking Heads released their second album, More Songs About Buildings and Food, in July 1978. It was their first of three albums produced by Brian Eno, who added sundry instrumentation in select places. Like its predecessor, side one features six songs, including the nervy/kinetic tracks “With Our Love,” “The Good Thing,” and “The Girls Want to Be With the Girls.” The side concludes with the five-minute staccato-funk jam “Found a Job.” Side two contains five songs, including “I’m Not in Love” and the twangy suburban observational “The Big Country,” where Byrne touches on themes he would further explore in his 1986 satire-comedy True Stories.

The recordings took place that spring at Compass Point in Nassau, Bahamas, with engineering by Rhett Davies and Benji Armbrister. The album’s one non-original, a cover of Al Green’s “Take Me to the River,” was issued as a single (US #26). 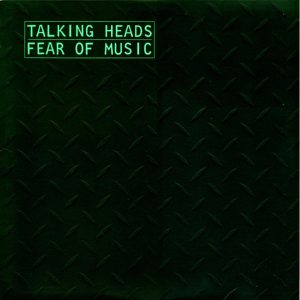 The band’s third album, Fear of Music, appeared in August 1979. The 11-song set is bookend by Byrne/Eno co-writes: the avant-funk “I Zimbra” (with lyrics appropriated from a 1916 poem by Dadaist Hugo Ball) and the lucid, harmonic-tinged instrumental “Drugs.” The former features guitar by Robert Fripp and percussion by Slits-frontwoman Ari Up. Other songs include the frenetic numbers “Paper” and “Cities” and the hazier tracks “Mind” and “Air,” the latter featuring airy background vocals by The Sweetbreathes, an impromptu studio grouping of Weymouth and her sisters Lani and Laura.

The album’s first single, “Life During Wartime” — alternately known by its chorus line This ain’t no party… this ain’t no disco… this ain’t no foolin’ around — became a centerpiece of the band’s live performances and a radio staple in select markets. The ballad “Heaven” was covered by Simply Red on their debut album Picture Book. Sessions were split between five separate NY studios with additional work at Chris and Tina’s loft. Harrison conceived the album’s black, corrugated cover design.

Talking Heads toured the U.K. in December 1979 with support on select dates by A Certain Ratio, Orchestral Manoeuvres In the Dark, and U2. Another opening act, The Human League, were dismissed from the tour for miming to prerecorded tapes. 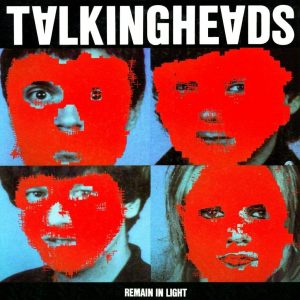 Talking Heads’ fourth album, Remain in Light, was released in October 1980. Side one contains three-medium length songs that fuse avant-funk with African polyrhythms: “Born Under Punches (The Heat Goes On),” “Crosseyed and Painless,” and “The Great Curve.” Side two features five tracks that explore atmospheric electronic arrangements, including “Listening Wind” and “Seen and Not Seen.” The closing track, “The Overload,” was their attempt at mimicking Joy Division based on descriptions of said band by the music press. (None of the Heads had actually heard Joy Division at the time of recording.)

The multi-layered textures on Remain in Light were achieved with an enlarged studio cast that included guitarist Adrian Belew, trumpeter Jon Hassell, and singer Nona Hendrix. Seven people are credited with percussion, including all the band members plus Eno and Robert Palmer.

The quasi-Afrobeat sermon “Once in a Lifetime” (UK #14, Aus. #23) has since become their most recognized song. Its accompanying video, directed by Toni Basil, shows Byrne in ritualistic dance mode against white and watery bluescreens. The clip was a staple of early MTV.

After finishing promotions for Remain In Light in early 1981, Talking Heads took a breather. Byrne and Eno issued the collaborative album My Life In the Bush of Ghosts on Sire in February 1981. That December, Byrne released a musical score for choreographer Twyla Tharp’s dance production The Catherine Wheel.

Also in 1981, Frantz and Weymouth assembled the Tom Tom Club, a pop-funk side-project with assorted sessionists, including Belew and Jamaican keyboardist Tyrone Downie. Their eponymous debut album was issued on Sire in October 1981, spawning a hit with “Genius of Love” (US #31). Meanwhile, Harrison debuted as a solo artist with the album The Red and the Black, recorded with side-players from the Remain In Light touring band, including Belew and keyboardist Bernie Worrell.

To mark the time, Sire issued the live double-album The Name of This Band Is Talking Heads in March 1982. The first record — recorded 11/17/77 for WCOZ in Maynard, Mass. (side one) and 1/17/79 at the Capitol Theater, Passaic, NJ (side two) — features material from the first three albums plus the little-heard “Love → Building on Fire” and the unrecorded “A Clean Break.” The second record — culled from 1980/81 shows in NY, NJ, and Japan — includes renditions of “Take Me to the River” and three songs apiece from Fear of Music and Remain In Light.

Japan
Japan was an English new wave band that released five albums between 1978 and 1981. They formed in 1...
Talking Heads – Remain in Light (1980)
Remain in Light is the fourth album by American New Wave/art-rock band Talking Heads, released in 19...
Eddie & Sunshine
Eddie & Sunshine were an English electro-pop duo comprised of vocalist Eddie Maelov and singe...
Pat Lundy
Pat Lundy is an American soul singer from NYC. Discography: Soul Ain't Nothin' but the Blue...
Grim Reaper
Grim Reaper were an English hard-rock/metal band from Droitwich, Worcestershire, that self-release...