The Surprise Sisters were an Australian vocal group that first recorded as The Cliffmores. After moving to the UK, they changed their name and issued multiple singles and a 1976 self-titled album, charting with the Andy Fairweather Low cover “La Booga Rooga.”

The Surprise Sisters comprised the four Sutcliffe sisters: Ellen, Linda, Patricia, and Susan. In the mid-1960s, they started performing harmony pop as The Cliffmores, inspired by English beat and American girl groups.

In 1967, The Cliffmores cut “He’s Not There,” a gender-repurposed cover of “She’s Not There” by The Zombies. It was issued on His Master’s Voice, backed with the track “Walk Tall,” both produced by David Mackay (The Twilights, Johnny Farnham, Dinah Lee).

On Columbia, The Cliffmores issued the jolly 1968 a-side “Michael Alexander,” written by Twilight Terry Britten, who later wrote hits for Cliff Richard (“Devil Woman,” “Carrie“) and Tina Turner (“What’s Love Got to Do With It”). Produced again by Mackay, it was backed with “You’re Gonna Lose That Habit.” They recorded other songs during this time, including the stately piano ballad “What Now My Love.”

The Sutcliffe’s eventually moved to the UK, where they took to the club circuit as The Surprise Sisters. In 1975, they linked with producer Larry Page and cut two singles on the Penny Farthing label: “Born to Move” (b/w “Deep Down”) and “Long Tall Glasses” (b/w “Ain’t It a Pity”). The respective a-sides originate from Creedence Clearwater Revival and Leo Sayer (Just a Boy). Famed arranger Charles Blackwell wrote both b-sides.

Visually, the sisters combined elements of ’70s glam and ’40s chic with space age collars and colors. They caught the attention of David Bowie, who alerted producer Tony Visconti, who signed them to his Good Earth label. The partnership produced three 1976 singles: “La Booga Rooga” (GD 1, b/w “Seashore”), “Got to Get You Into My Life” (GD 3, b/w “Misty Morning”), and “I Ain’t No Mountain” (GD 5, b/w “Can I Believe In You”). The first and third a-sides originate from Welsh singer/songwriter Andy Fairweather Low; the second is a popular Beatles number. Patricia Sutcliffe wrote/co-wrote all three b-sides, two in partnership with William Moore. 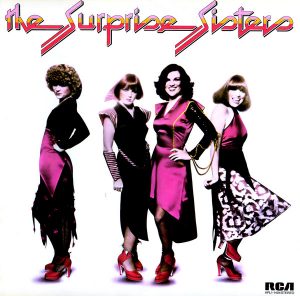 Internationally, all three singles appeared on RCA Victor, which issued their singular self-titled album in the US and Germany in 1976. It features “La Booga Rooga” and “Can I Believe In You,” plus eight additional Visconti-produced numbers, including the Sutcliffe/Moore compositions “Mirror Mirror” and “Downtown Boys.” The cover was shot by Mick Rock (Transformer, Ziggy Stardust, Raw Power, Queen II, Sheer Heart Attack, Axe Victim) in a retro-camp style evocative of the Pointer Sisters and the Manhattan Transfer.

In 1977, the sisters issued one further Good Earth single: “Music Man” (b/w “Rhythm”), produced by Johnny Arthey and Phillip Swern. Patricia wrote the b-side while Ellen Sutcliffe collaborated with Moore on the a-side and the subsequent “Natural Fact,” the b-side of their final single “(Dancin’ Man) Gotta Get Up,” produced by Susan Sutcliffe and released on Track Record.

The Surprise Sisters disbanded in 1978. Ellen Sutcliffe became the namesake of Rio & the Robots, which issued two small-press singles in 1980/81.