Strutt was an American soul-funk band from New Jersey that released the album Time Moves On on Brunswick Records in 1976.

Strutt was assembled in 1973 by guitarist Carmen Cosentino. They were taken under the wing of veteran composer/arranger Benny Clark, who coordinated their recording sessions at NYC’s O.D.O. Studios. 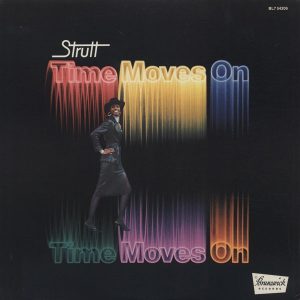 Strutt followed Time Moves On with the 1977 standalone single “Power of the Pyramid” (b/w “Our Love”) on one-press Sound Trap Records. Bassist Edward Walker notched writer/arranger credits on a pair of 1976/77 singles by singer Jean Shy, released on Fantasy and Playboy.

Time Moves On was first reissued in 2001 on the Japanese Victor label. Three further pressings appeared in the 2010s on Solid Records (Japan) and Demon Records (U.K.)

The 360 Degree Music Experience
The 360 Degree Music Experience were an American avant-jazz ensemble that released six albums on a...
The Clash
The Clash was an English rock band that released five albums between 1977 and 1982, including two mu...
Esperanto
Esperanto was a multi-national art-rock/flamenco ensemble, formed in Brussels by violinist Raymond...
Miles Davis
Miles Davis (May 26, 1926 — Sept. 28, 1991) was an American jazz trumpeter with a recording career t...
Ike & Tina Turner
Ike & Tina Turner were the R&B/soul-rock duo of American guitarist/bandleader Ike Turner and...
Shanghai
Shanghai were an English hard-rock/blues band that released a self-titled album on Warner Bros. i...
Paul Brett
Paul Brett (born June 20, 1947) is an English folk-psych guitarist and composer from Fulham, Great...
Ozone
Ozone were an American soul-funk band from Nashville that released five albums on Motown between 1...
Crawler
Crawler were an English/American hard-rock band that evolved out of Back Street Crawler following ...
So & Co
So & Co were a French avant-psych band that released a self-titled album on Pathé in 1975. Th...
UFO
UFO are an English hard-rock band from Enfield, Middlesex, that released two albums on Beacon in 1...
Richard Clapton
Richard Clapton (born May 18, 1949) is an Australian singer-songwriter from Sydney who released ei...