String Driven Thing was a British folk-rock band, originally formed in Scotland as a harmony combo by the husband/wife team Chris and Pauline Adams. In 1972, they moved to London and added violinist Graham Smith. After the 1973 release The Machine That Cried, the Adams departed. Smith led a new lineup through two further albums with singer Kim Beacon. In 1977, Smith joined Van Der Graaf.

String Driven Thing formed in Glasgow in 1967 as a harmony pop trio when guitarist/singer Chris Adams and his singing percussionist wife Pauline teamed with guitarist, bassist, and percussionist John Mannion. Over the next two years, they made their name on the local folk club circuit. In 1970, they signed with Concord, a newly established label with a small roster of folk-pop talent (Lovelace Green, Stavely Makepeace). 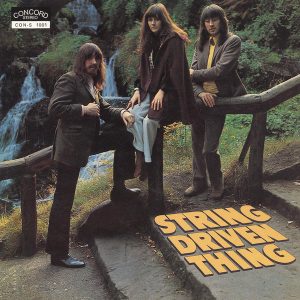 The trio released their self-titled album in 1970 on Concord (UK). It contains 12 Chris Adams originals, including “July Morning,” “Magic Garden,” “City Man,” and “Another Night In This City.” All tracks are in the 2–3-minute range apart from the lengthier album closer “One Of the Lonely People.”

The original release of String Driven Thing (cat# CON-S 1001) was the first of only two albums on the Concord label, which otherwise issued singles during its five-year existence. In 1971, the album appeared in Germany on Vogue Schallplatten.

Concord, Vogue, and Astor (Australia) issued one single from the album, “Another Night In This Old City” (b/w “Say What You Like”). 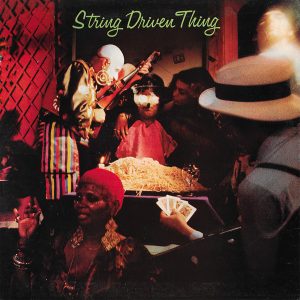 The costumed banquet gatefold cover was designed by Hipgnosis, the post-psych graphics firm that also did the band’s subsequent three covers. The front shows a big tray of pasta surrounded by five subjects in a red-lit lounge. The revelers include a red-haired ebony lady and a flamboyantly attired violinist (chrome dome, hoop earrings, satin bolero jacket, striped clown pants). The back shows further revelers at an adjacent table, including two retro ritzy ladies (one in white face) and a midget concertinist sailor. The inner-spread features a b&w photo of the four band members in the same setting. 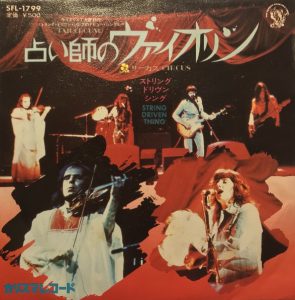 Charisma issued “Circus” as a single in the UK and US, backed with “Hooked On the Road.” In Canada, Buddah Records paired the a-side with “My Real Hero.” In 1973, “Fairground” appeared as a Japanese 7″ on Mooncrest. 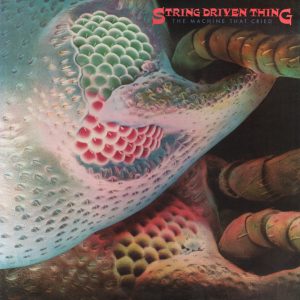 In February 1973, String Driven Thing reentered I.B.C. with a fifth member, drummer Billy “The Kid” Fairley. The resulting album, The Machine That Cried, appeared in August 1973 on Charisma (US, North America, Japan). It contains eight Chris Adams compositions, including “Heartfeeder,” “To See You,” “Night Club,” and the title track. Chris co-wrote a song apiece with Smith (“Sold Down the River”) and Pauline (“People On the Street”).

Talmy produced The Machine That Cried with engineers Lyon-Shaw and Jones, who respectively worked that year on breakthrough albums by Golden Earring (Moontan) and Return to Forever (Light As a Feather). Wilson was deputized by bassist Bill Hatje on three tracks, including “Heartfeeder,” which also features guest cellist Clare Sealey. Additional sessions took place at Advision studios during the early summer of 1973.

UK copies sport a Hipgnosis gatefold sleeve with a b&w inner-spread band photo, taken in a low-ceiling interior with a violin-wielding Smith seated Indian style, sideways to the camera, in his trademark white robe. In the US, The Machine That Cried was issued in a single sleeve with a title margin and a standard medium shot of String Driven Thing (back).

The album’s UK release was accompanied by the non-album a-side “Are You a Rock and Roller,” issued as a double-sided promo. It also appeared as a proper single, backed with the album track “Night Club,” a Dylanesque number with lyrics inspired by the cover image of their prior album. Another non-album a-side, “It’s a Game,” appeared in September 1973 (b/w “Rock and Roller”).

Time constraints forced the exclusion of “River Of Sleep,” an 11-minute suite in three parts (“The Sowee,” “Search In Time,” “Going Down”), originally intended as the closing track of The Machine That Cried. The original album contained only the two-minute final section, “Going Down.”

In 1991, the album was issued on CD by German archivists Repertoire Records with the entirety of the suite, also included on subsequent reissues. In 1996, UK specialists Ozit-Morpheus Records took the Repertoire tracklist and added three additional cuts: “It’s a Game” and the outtakes “If Only the Good” and “Part of the City.”

During the making of The Machine That Cried, Chris Adams coped with depression and a collapsed lung. In early 1974, Wilson yielded to Hatje and Billy Fairley cleared out for ex-Beggars Opera drummer Colin Fairley (no relation). Soon afterwards, the road-weary Adams couple quit the band and returned to Glasgow. This left String Driven Thing with no original members and only one tenured player, Smith, who passed time with appearances on 1974 albums by Greenslade (Spyglass Guest) and Australian singer/songwriter Gary Shearston. 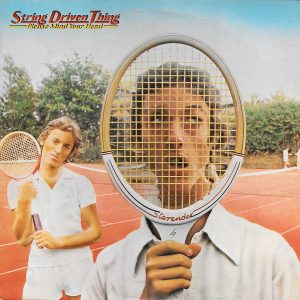 The new lineup’s first of two albums, Please Mind Your Head, appeared in November 1974 on Charisma (UK, Canada, Netherlands, Australia) and 20th Century Records (US). It features nine songs, including four Exell/Roberts co-writes: “Overdrive,” “Man of Means,” “Black Eyed Queen,” and “Keep On Moving.” The album also has two Colin Fairley numbers (“Josephine,” “Mrs. O’Reilly”) and a song apiece by Smith (“Timpani for the Devil”) and Beacon (“Without You”).

The six-minute closing track, “To Know You Is To Love You,” is a song by Syreeta, originally found on her 1972 self-titled album, co-written with her producer and partner Stevie Wonder.

The cover of Please Mind Your Head was an early credit for graphic artist Peter Christopherson, who joined Hipgnosis that year. It shows two tennis players with heads switched and ajar; the foreground subject’s racket appears to work as a mirror when held aface. Visually, the cover has similarities with another Hipgnosis credit, Headroom, the 1973 solo album by erstwhile Hollies singer Allan Clarke. Christopherson subsequently designed the burning handshake cover to Pink Floyd‘s 1975 album Wish You Were Here. 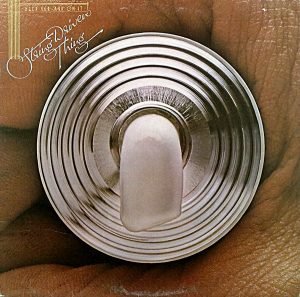 String Driven Thing released their final album, Keep Yer ‘And on It, in late 1975 on Charisma (UK, Netherlands, Canada) and 20th Century (US). This too features nine songs with four Exell/Roberts co-writes: “Call Out for Mercy,” “Chains (I Wanna Be Just Like Stan Bowles),” “Part of It,” and “Stand Back In Amazement.” The album also includes two Excell solo compositions (“But I Do,” “Ways of a Woman”), one Excell/Fairley co-write (“Starving In the Tropics”), and the Beacon number “Old Friends.” Side one wraps with the Beatles cover “Things We Said Today.”

The album’s cover image — a squeezed close-up tube spout in the grip of a hand — was taken by Hipgnosis photographer Howard Bartrop (Wish You Were Here, How Dare You!) with graphics by Colin Elgie (Scheherazade and Other Stories, Year of the Cat). The rear image repeats the photo with a fish-eyed view of the band in lieu of the spout. The band are posed in an alley with a head-shaven Smith kneeling foreground.

Keep Yer ‘And on It yielded one single: “But I Do” (b/w “Stand Back In Amazement”). Soon after the album’s release, Smith left the band, which welcomed keyboardist Derek Beauchemin in its final months.

String Driven Thing’s final release was the June 1976 single “Cruel to Fool,” an Excell/Roberts composition backed with C. Fairley’s “Josephine.” Shel Talmy returned as producer, having recently worked with Chris White, Kristine Sparkle, and Velvet Glove. In the US, 20th Century issued the single with a different b-side, the Excell–Roberts–Beacon co-write “Sail Away.” Fairley’s departure signaled the band’s end.

Smith played on 1976 albums by Al Stewart (Year of the Cat) and Osibisa (Ojah Awake). In 1977, he played on Over, the sixth solo album by Peter Hammill. Later that year, Smith followed Hammill back into Van Der Graaf Generator, which shortened its name to Van Der Graaf for the album The Quiet Zone, The Pleasure Dome. After their 1978 live double-LP Vital, Smith played on the Hammill solo albums The Future Now and PH7.

Also in 1978, Smith played on Please Don’t Touch!, the first post-Genesis solo album by guitarist Steve Hackett. Between 1981 and 1985, Smith released four solo folk albums from his new base in Iceland.

Chris and Pauline Adams released three singles as a duo on Charisma in 1975/76:

Beacon sang backing vocals on Thin Lizzy’s 1976 release Johnny the Fox. In 1979, he sang lead on A Curious Feeling, the debut solo album by Genesis keyboardist Tony Banks. That same year, Beacon made his solo debut with the album Ravenna. That and his 1981 followup, Talking To Myself, were issued on the new wave label Rialto (The Korgis, The Planets, The Regents, Mobiles). Ravenna‘s opening track, “My Blues Have Gone,” was covered in 1983 by Pointer Sister June Pointer.

Contrary to rumor, Wilson is not the same Colin Wilson who made the 1975 folk rarity Cloudburst.

Bobby Hutton
Bobby Hutton (born Harold Hutton) is an American soul singer from Detroit who released six singles b...
Steel Mill
Steel Mill was an English hard-rock/psych band that released the album Green Eyed God on Penny Far...
Head
Head were a Scottish jazz-rock band from Glasgow that released the album GTF on SRT Productions Lt...
Dark
Dark was an English hard-rock/psych band that issued the album Round the Edges on small-press Sis ...
Olivia Newton-John
Olivia Newton-John (Sept. 26, 1948 — Aug. 8, 2022) was an Australian singer, actress, and entreprene...