Stonehouse was an English hard-rock band that released the album Stonehouse Creek on RCA Victor in 1971. Two members moved to the folk-psych combo Asgærd for a further one-off in 1972.

Stonehouse hailed from Plymouth, Devon, where guitar/singer Pete Spearing teamed with bassist Terry Parker, drummer Ian Snow, and vocalist James Smith. They took their name and subsequent album title from Stonehouse Creek (aka Stonehouse Lake), the local site of two military buildings. (The creek was in-filled in 1973 for an expansion of Victoria Park.)

The band scored a deal with RCA Victor and recorded their album in three days at London’s Advision Studios. 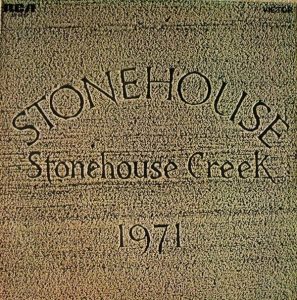 Stonehouse Creek was produced by Mickey Clarke, who recently produced albums by Room (Pre-Flight) and Raw Material (Time Is…). The engineer on the album, Barry Ainsworth, worked on concurrent titles by Jack Bruce (Harmony Row), Beggars Opera (Waters of Change), Stud, and Continuum.

The back cover has a b&w photo of the band sprawled across a bench. The fourth song listed under Side 1 in the tracklist, “Move Away,” doesn’t actually appear on the album.

The LP liner notes describe Stonehouse as “a group of many musical colours, ranging from country rock to classical.”

Stonehouse crumbled shortly after their singular album. Smith and Snow joined Asgærd, a folksier combo that released the album In the Realm of Asgærd on the Moody Blues‘ Threshold label in 1972.

Stonehouse Creek was first reissued (unofficially) in 1993 on Angel Darling. Since 2007, the album has thrice been reissued on Universum Records (Germany, Russia). No reissue accounts for the missing “Move Away.”

Chris Youlden
Chris Youlden is an English blues-rock singer who sang in the second lineup of Savoy Brown from 1968...
Gass
Gass were an English jazz-rock/psych band from London that released the album Juju on Polydor in 1...
Sindelfingen
Sindelfingen was an English symphonic/folk-rock band that released the 1973 album 'Odgipig, now a ...
Essra Mohawk
Essra Mohawk — aka Sandra Elayne Hurvitz (born April 23, 1948) — is an American singer/songwriter ...
Laurelie
Laurelie were a Belgian psych-rock band from Verviers, Liège, that released a self-titled album on...