Steely Dan was an American jazz-rock/pop band that released six studio albums on ABC between 1972 and 1977, followed by an eighth on MCA in 1980. After a 20-year break in recording, they issued two discs of new material during the early 2000s. Debuting as a six-piece, the lineup trimmed by 1975 to the duo of Donald Fagen and Walter Becker. Musically, the band is noted for its sophisticated chordal patterns, slick instrumental passages, and oblique lyrical metaphors.

Keyboardist/singer Donald Fagen and guitarist/bassist Walter Becker met in 1967 while the two were enrolled at Bard College. As students, they roomed with aspiring singer/songwriter Terence Boylan (soon to emerge in Appletree Theatre) and played in the jazz band Leather Canary with then-drummer/future-comedian Chevy Chase (soon to record with Boston psychsters Chamaeleon Church).

The pair shopped their song’s at New York’s Brill Building, where singer/composer Kenny Vance offered them slots in the backing band of his group, Jay & the Americans. Through this liaison, the pair recorded soundtrack music for the 1971 comedy-drama You’ve Got to Walk It Like You Talk It or You’ll Lose That Beat. Though their songs attracted few buyers, Barbra Streisand recorded the Fagen/Becker composition “I Mean To Shine” for her 1971 release Barbra Joan Streisand. The pair also cut numerous demos during this time, a few of which (“Caves of Altamira,” “Brooklyn,” “Barrytown”) were later re-cut by Steely Dan.

In 1971, Vance-associate Gary Katz moved to Los Angeles to produce records for ABC Records. He hired Fagen and Becker as in-house songwriters, so they followed him West. Realizing that their songs were too idiosyncratic for other artists on the label, Katz encouraged them to form a band. The pair enlisted drummer/singer Jim Hodder (Bead Game) and guitarists Denny Dias and Jeff “Skunk” Baxter (Ultimate Spinach). They also brought in a second singer, David Palmer, to provide more conventional vocals on select tracks. The band christened itself Steely Dan, taken from the name of a steam-powered dildo in William S. Burroughs’ Naked Lunch.

In early 1972, Steely Dan issued its debut single “Dallas” (b/w “Sail the Waterway”) on ABC. It was produced by Katz (credited here as Kannon) who would produce the band’s first seven albums with engineer Roger Nichols. The single was pressed in small quantities and has never been reissued in any format, though the a-side was covered by Poco on their 1975 release Head Over Heels.

teely Dan released their debut album, Can’t Buy a Thrill, in November 1972. Fagen sings/co-sings lead on seven of the 10 songs, including “Kings,” “Only a Fool Would Say That,” and “Turn That Heartbeat Over Again.” Palmer sings lead on “Brooklyn (Owes the Charmer Under Me)” and the evergreen “Dirty Work.” Hodder, in his only vocal spot for the band, sings “Midnight Cruiser,” covered the following year by UK rockers Capability Brown. The album spawned two singles: the Latin-tinged “Do It Again” and the galloping “Reelin’ In the Years,” the latter featuring a guitar solo by sessionist Elliott Randall (Rupert Holmes, Henry Gaffney, Cory, Enchantment). The cover photomontage was designed by Robert Lockart, whose other credits from the period include albums by Gandalf, SRC, Bloodrock, Candi Staton (Candi), and Peter Ivers.

Palmer was dismissed from the lineup after this release but retained as a backing vocalist on the followup. He resurfaced later in the decade in Wha-Koo. 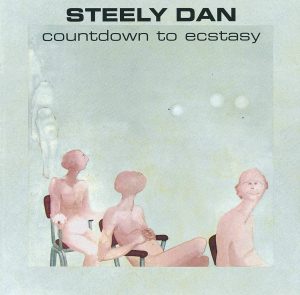 Steely Dan’s second album, Countdown to Ecstasy, hit stored in July 1973. It features eight songs, mostly in the five-minute range, including “Bodhisattva,” “The Boston Rag,” and “King of the World,” the last of those featuring Rick Derringer on slide guitar. Two singles were culled: the nostalgic “My Old School” and the harmony-woven “Show Biz Kids.” The album was recorded at the Caribou Ranch, a converted barn studio in the Rocky Mountains owned by Chicago producer James William Guercio. The cover was painted by Fagen’s then-girlfriend Dorothy White, credited here as Dorry of Hollywood. 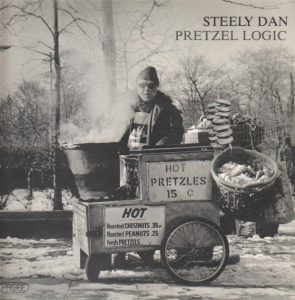 That October, Steely Dan entered LA’s Village Recorder to lay tracks for Pretzel Logic, released the following February. It features 10 short numbers, including “Parker’s Band,” “Through With Buzz,” and “Charlie Freak.” The two longest songs, both clocking at 4:32, were issued as singles: “Pretzel Logic” and “Rikki Don’t Lose That Number” (US #4), the latter lifting the piano riff from Horace Silver’s “Song for My Father.” Fagen and Becker employed a larger cast of session players for this recording, setting a trend for future albums. This is the last release to feature the original five-piece band; Dias and Baxter would subsequently appear as sessionists. Hodder, in his final appearance, is reduced to singing backup. The drums are played by Jim Gordon (Traffic, Derek & the Dominoes) and Jeff Porcaro. 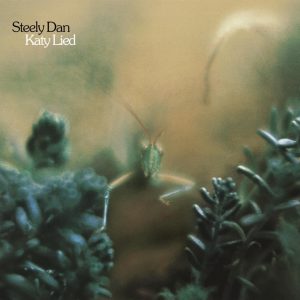 In March 1975, Katy Lied hit the market. It marks the transformation of Steely Dan into a studio group centered on the creative team of Fagen and Becker and their cast of hired hands. The album features five songs per side, including the vibe-laced “Everyone’s Gone to the Movies,” the jazzy 3/4 “Your Gold Teeth II,” and the loungey evergreen “Doctor Wu.” The first two songs on side one, “Black Friday” and “Bad Sneakers,” were both issued as singles. The pair are primarily backed on this release by Jeff Porcaro (drums), Michael Omartian and David Paich (keyboards), and Hugh McCracken (guitar).

Katy Lied also marks the entry of singer Michael McDonald, who counters Fagen during the rising choruses of “Rose Darling” and “Any World (That I’m Welcome To).” Other guests on the album include saxophonist Phil Woods, percussionist Victor Feldman, guitarist Larry Carlton, and a returning Derringer and Randall. Dias, who plays the solo on “Your Gold Teeth II,” is the only ex-member to return as a sideman. Jimmie Haskell provides horn arrangements on the closing track, “Throw Back the Little Ones.” 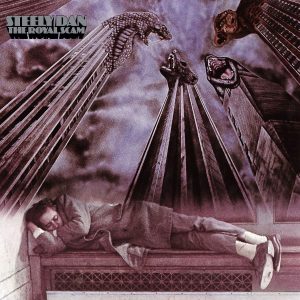 Steely Dan released its fifth album, The Royal Scam, in May 1976. It was recorded over a five-month period at LA’s ABC Studios and Manhattan’s A&R Studios. The pair embrace funk and reggae on this release. The former is evident on “Green Earrings,” “Kid Charlemagne”, and “The Fez,” the last two issued as singles. Guitarist Dean Parks plays a talk-box solo on the reggaefied radio favorite “Haitian Divorce” (US #17). Additional players include tenor saxophonist John Klemmer, who sends billowing notes through “The Caves of Altamira”; and a returning Carlton, who plays on four tracks, including the suspenseful “Don’t Take Me Alive” and the lengthy, closing title-track. The lizard-skyscraper cover art is credited to Zox (aka painter Lawrence “Larry” Zox). 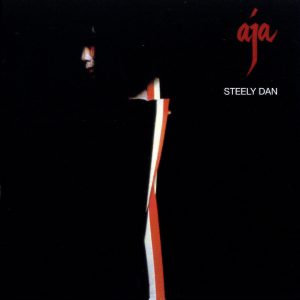 Fagen, Becker, and Katz spent the first half of 1977 recording tracks for Aja, released that September. The first side features three medium-length songs: “Black Cow,” “Deacon Blues,” and the title-track. Side two is book-ended by the Steely Dan signatures “Peg” and “Josie.” The music here takes a slicker approach with soulful vocal arrangements and extended instrumental passages.

Notable guests include saxophonist Wayne Shorter (“Aja”), guitarist Steve Khan (solo on “Peg”), keyboardist Joe Sample (Clavinet on “Black Cow”), and drummers Bernard Purdie and Steve Gadd. McDonald and Eagles bassist/singer Timothy B. Schmit provide backing vocals, as do the studio soul trio of Clydie King, Sherlie Matthews, and Venetta Fields, whose harmonies feature prominently on “Deacon Blues.” That song also features guitarists Lee Ritenour and Larry Carlton in one of their few overlapping appearances. Feldman lends sundry instrumentation on all seven tracks, including vibraphone on “Home at Last” and “I Got the News.”

In 1978, Steely Dan recorded the song “FM (No Static at All)” for the soundtrack of the Universal Pictures radio-comedy FM. That same year, the band’s first compilation (Greatest Hits) was issued on ABC. Amid the singles and deep-cuts, the double-LP includes the previously unreleased “Here at the Western World,” a leftover from The Royal Scam sessions. Concurrently, an eponymous compilation was issued for the Japanese market, this one sporting a geisha/New Romantic cover-shot of Yamaguchi.

Sessions for the seventh Steely Dan album commenced in late 1978 in New York City. The process was flanked with difficulties that caused a two-year delay in the album’s completion. In 1979, Becker was struck by a car while crossing an intersection in Manhattan’s Upper West Side. The incident left him hospitalized for six months, during which he collaborated with Fagen via telephone. That December, an assistant engineer accidentally erased three-fourths of a just-completed track, “The Second Arrangement,” which Katz had favored as the upcoming album’s lead-off single. Attempts to rerecord the song proved unsatisfactory and the team soon abandoned the idea. 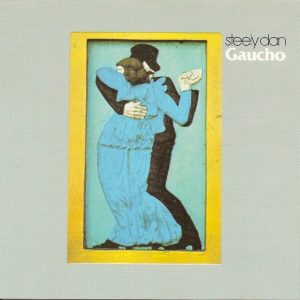 After some wrangling between Warner Bros. and MCA (parent of the just-dissolved ABC), Gaucho was released on MCA in November 1980. Once again, the first side features three medium-length numbers: “Babylon Sisters,” “Hey Nineteen” (US #10), and “Glamour Profession.” Side-two contains four songs, including “Time Out of Mind,” which features 40 seconds of guitarwork by Dire Straits frontman Mark Knopfler. Notable brass/woodwind players on the album include Tom Scott, David Sanborn, Ronnie Cuber, and the Brecker Brothers. The titles-track is co-credited to Keith Jarrett, who noted thematic similarities to his 1974 composition “Long As You Know You’re Living Yours.”

In 1986, the two were summoned by Katz to play on select tracks on Zazu, the singular album by singer/songwriter and former model Rosie Vela. This rekindled the Fagen/Becker partnership and the pair demoed songs over the following year, though nothing came to fruition. Meanwhile, Becker produced albums by Fra Lippo Lippi, Rickie Lee Jones, Michael Franks, and the 1989 release Diary of a Hollow Horse by China Crisis.

In 1993, Fagen recorded his second solo album, Kamakiriad, with help from Becker. They assembled a touring band to promote the release and this led to the 1994 reconstitution of Steely Dan, initially as a live concern. That same year, Fagen co-produced Becker’s debut solo release 11 Tracks of Whack.

In 1995, Steely Dan issued Alive in America, culled from performances on their 1993 and 1994 tours. The 66-minute disc features 11 numbers from their 1972–80 repertoire, culminating with a nine-minute rendition of “Aja.”

Between 1997 and 1999, Steely Dan recorded tracks for their first album in two decades. Two Against Nature was released in February 2000 on Warner’s Giant subsidiary. It features nine new Fagen/Becker originals, including “West of Hollywood,” “What a Shame About Me,” “Negative Girl,” and “Almost Gothic.” The disc yielded three singles, including the taboo confessional “Cousin Dupree.” Fagen and Becker supported this release with a well-received world tour, augmented by a large touring band and three female backing vocalists.

Encouraged by this newfound success, Fagen and Becker spent the following two years recording a ninth Steely Dan album. The resulting Everything Must Go was released on Reprise in June 2003. The 45-minute disc contains nine songs, including “Pixeleen,” “Blues Beach,” “The Last Mall,” and “Green Book.” The title-track concludes the disc with the tell-tale line we’re goin’ out of business, indicating this would be their final album as a musical team. Despite this, Steely Dan continued as an on/off live act for the next 13 years.

On September 3, 2017, Becker died at age 67 from throat cancer. Fagen subsequently toured under the Steely Dan nameplate to honor their 50-year musical partnership.